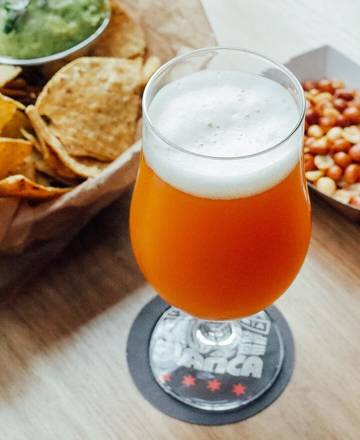 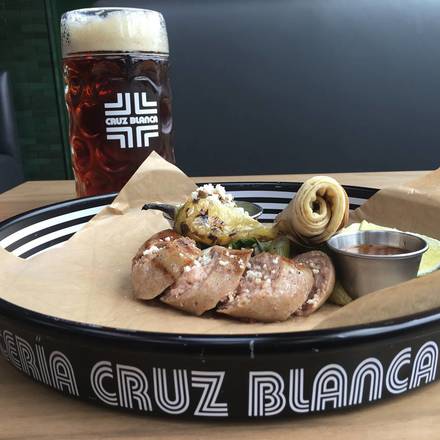 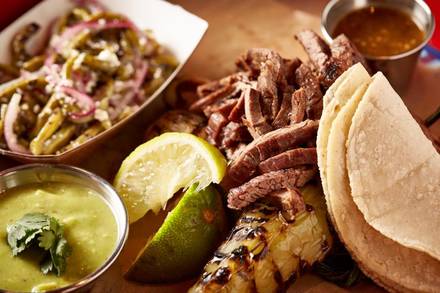 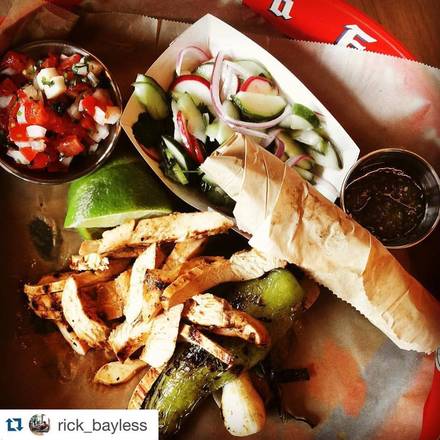 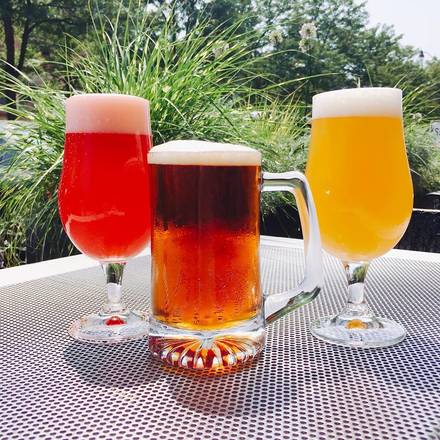 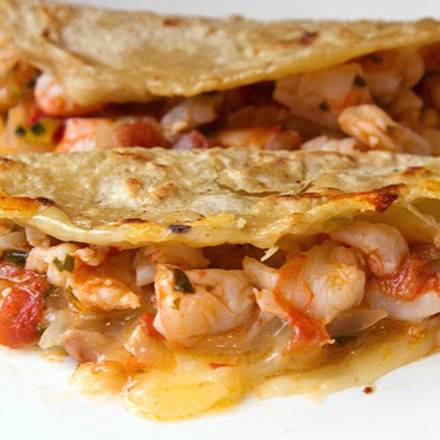 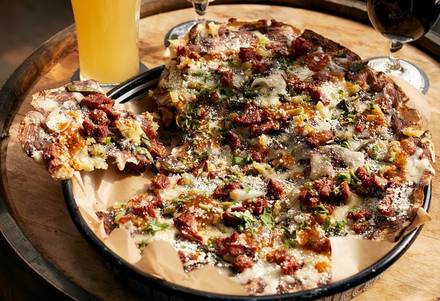 Cruz Blanca is the Mexican cuisine kingpin's foray into the craft beer scene; the adjacent restaurant is Leña Brava, which focuses on wine. Onsite, they're putting their spin on classic German, Austrian and French styles of beer--similar to the beers that blossomed throughout Mexico City in the 1860s.

All of Cruz Blanca's fare comes out of its taquería. Wood-grilled meats are the specialty, with half-cured flank tasajo, red chile pork cecina, chorizo and chicken being some of the highlights. They're accompanied by wood-grilled knob onions and peppers, smoky Oaxacan pasilla salsa, avocado salsa, crunchy pico de gallo, grilled nopal cactus, cucumbers and fresh-made tortillas.

And those wanting an alternative to tacos may choose from shrimp enchildas or Oaxcan-style tlayudas, which are giant, shareable tostadas with black bean spread, cheese, grilled knob onions, güero chile, green salsa and a choice of a wood-grilled protein. 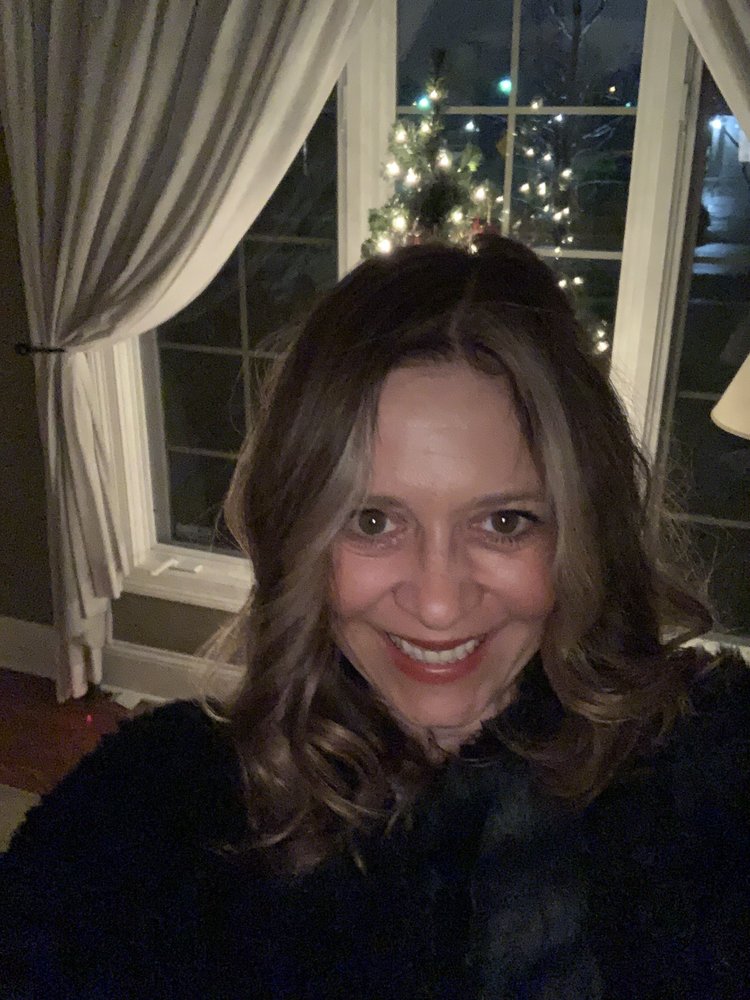 No more reservations! Popped in for lunch and loved not needing reservations. All three tacos were amazing: Cauliflower, Lamb cheeseburger, Shrimp. So... 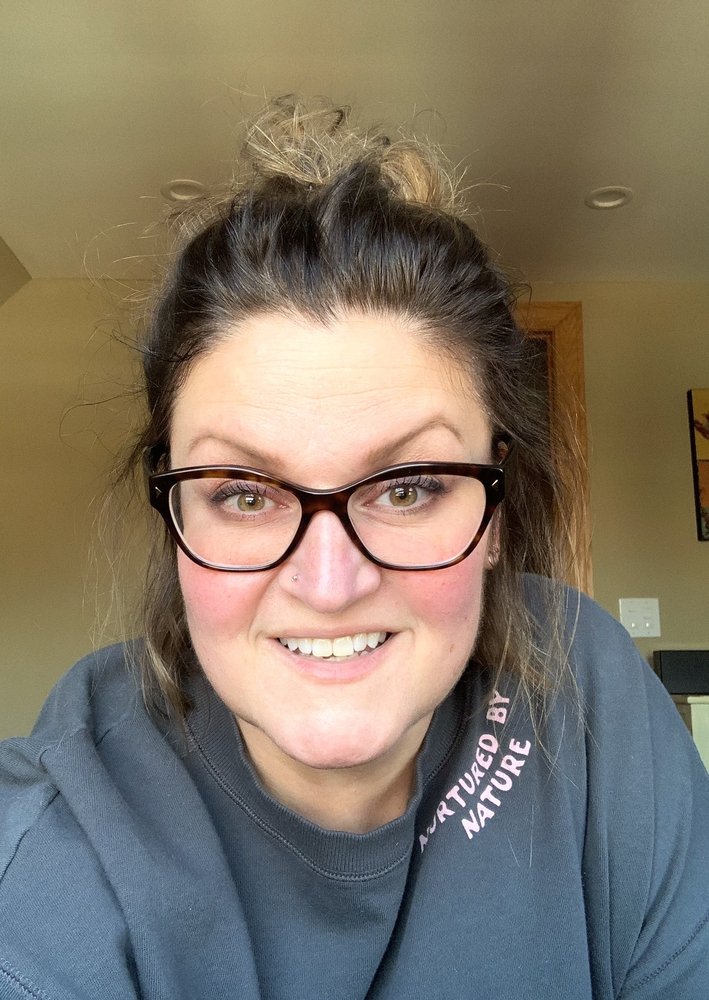 We were guests here for a wedding reception. Vibe is non pretentious fun. Tried the short rib and shrimp tacos and they were the best tacos ever in life.... 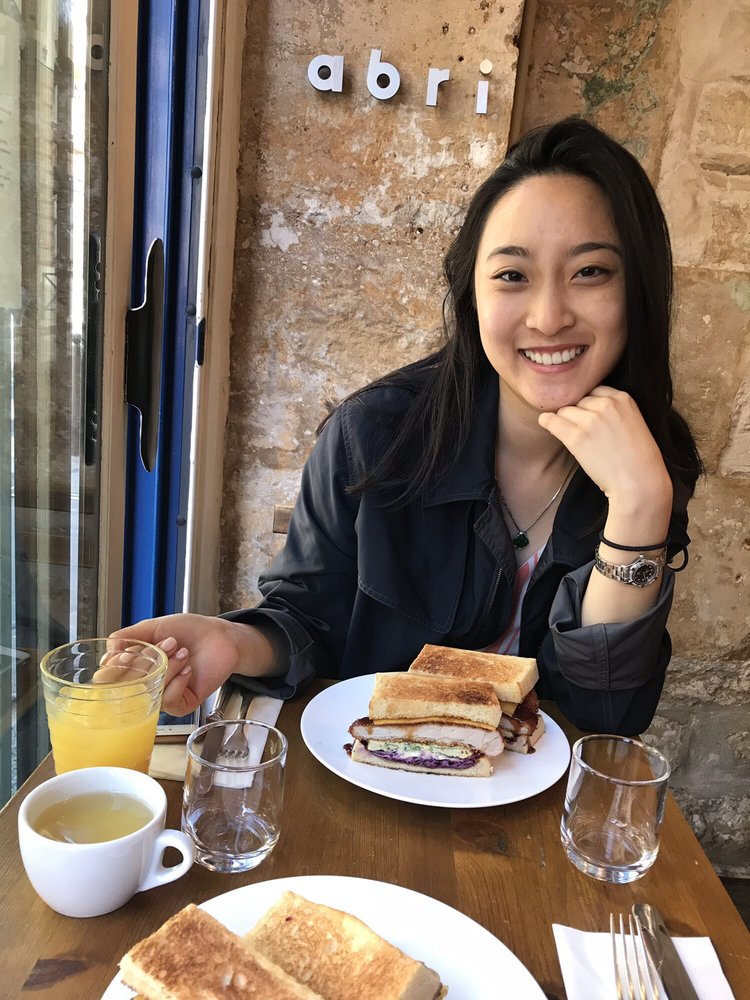 Went here for a quick dinner and it was not bad at all. Ended up getting the avocado tostado which was a little bland even with the added salsa. Very... 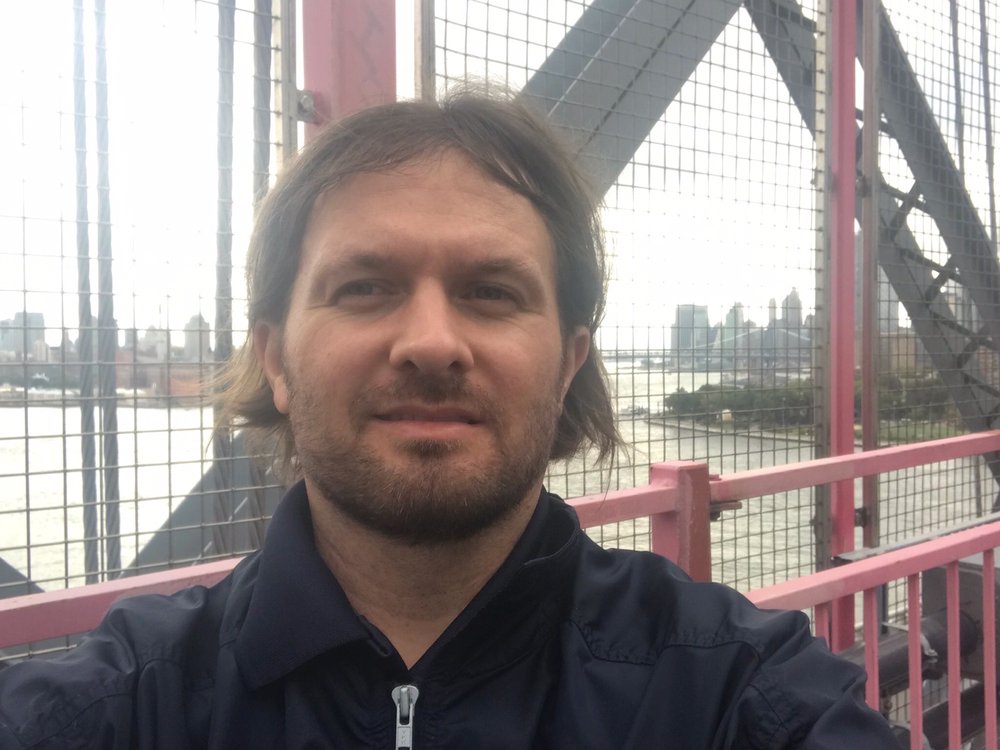 Hey look, another Rick Bayless restaurant, and it's also a brewery. If the knowledge that a restaurant is owned by a superstar chef makes you think it has...

Five stars all round! It was a great finding exploring the west loop area in Chicago. Their beers are fantastic, the food was great and service five stars! I wish I could bring them home with me.

Couldn't recommend Cruz Blanca more! Their food is phenomenal - especially the lamb cheeseburger tacos and the giant tostadas - and the service is top-notch. They are also great with dietary restrictions and offer many gluten-free options.

Celebrated my birthday here and I loved it! Had Rick as our server who was awesome, drinks were on point and the guacamole and carnita nachos were delicious! Definitely will be going back!

Fulton Market visit and it didn't disappoint! There are so many places to try out but decided to go to this one - a BREWERY for their craft beer and ended... 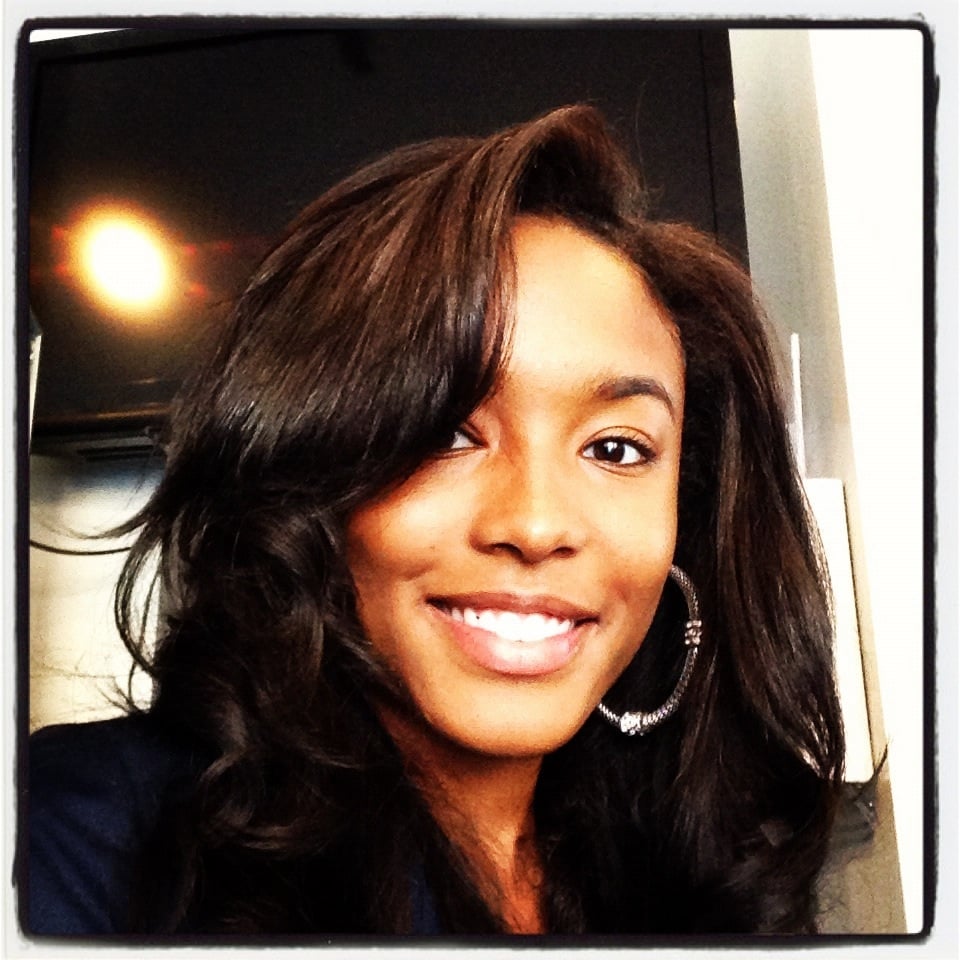 READ BEFORE MAKING CRUZ BLANCA THE MAIN CHICK OF WEST LOOP TACOS! FIRST STAR: The location. You really cannot beat being in the Wesley when it comes to... 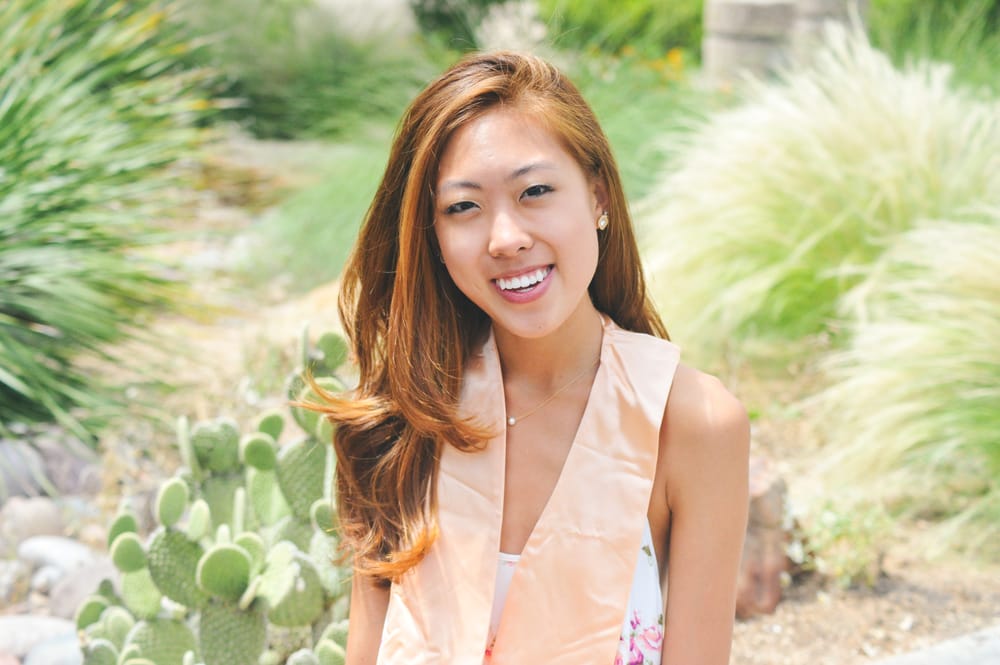 Granted taste of Randolph was right next door, the service was very slow (a sad trend nowadays) on a Saturday late afternoon. We waited a while until we...

Good quality food, but my wife and I weren’t impressed; none of it was truly THAT tasty and it was all extremely expensive for what we got. Service was a but non-attentive and lacking. We were also charged extra for al pastor to our california burrito without every mentioning there would be a charge. The only way we would’ve known this is because we asked for the receipt after. This felt inconsiderate because I would’ve gotten carne asada for no extra charge if that was the case 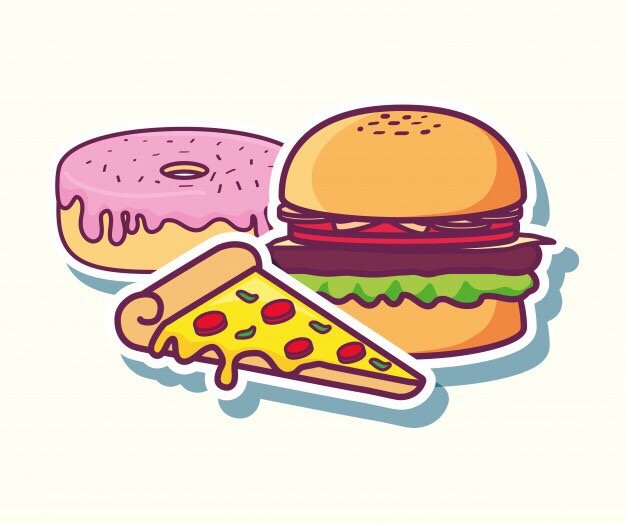 Ordered delivery This is a nice artisanal taco shop. With artisanal tacos, you get pretty food in the form factor of a taco at a high markup. I thought the...

Location is great. Right in the mist of everything. We ordered our drinks and food, which was less than stellar considering all the raving reviews about the food. The food was either over salted or no seasoning at all. We did not like it so just picked around it. Our drinks came out 30 mins after our food. I wish I was kidding. I have to admit the drinks were strong and the highlight of our time here. Unfortunately we will never be back.

This is a great place to stop for good Mexican food especially for the area. I also believe they own Lena Brava next door which I've also been too they are high end food. This place has a bunch of amazing drinks. A very very wide menu of unique Mexican beers and cocktails. The mezcel Marg was good. The spicy mango was sweater than it was spicy. MACHINA VERDE is a spicy. It was a minchalada made with serrano peppers instead of tomato juice. Super unique and good. Food wise they have some appetizers. The Caesar salad was one of the best salads I e had in a minute. I got the taco platter with two meats. It made 3 good sized tacos with a little for left overs. The chicken was better than the steak. The new mexico smothered burrito was very tasty. It's still not a classic wet burrito like from grand rapids or out west. But it is very very tasty and cheesy. And the cauliflower taco is to die for. My favorite item we got. I recommend for a layed back experience with a outdoor patio.

I only tried their beers, but I was really happy with them and the service. The waiter was able to give great recommendations, and the whole place seemed quite inviting. It was a good place to just have an enjoyable time. My friend tried the fish tacos and said they were some of the best he's ever had despite the fact that he used to live in Southern California.