To start, there’s rib eye carpaccio, crab cake (with a beautiful jicama and celery root slaw), as well as oysters that are as good as any to be had in this city, delivered fresh and expertly shucked…but okay, enough about the non-meat menu items, let’s get to the meat. Consider the Delmonico center cut ribeye. This steak was originally served at Delmonico’s in lower Manhattan, which opened its doors in the early 1800s. This landmark restaurant was the birthplace of the Delmonico steak, and it’s also said to be the birthplace of the a la carte menu and the wine list, which is saying quite a lot (and we’ll let the historians debate the truth of all those claims). What is certain is that the Delmonico center cut ribeye at Primehouse is a spectacular example of how to take a traditional cut and preparation to the next level. It’s safe to say that you will probably not have a better Delmonico steak anywhere…including Delmonico’s (take that, New York!). You can also get ribeye that’s been aged 40, 55 or 75 days. With any of these aged selections, you’ll experience a powerful example of the effect of aging upon meat. The dry aging process reduces the water content of the meat and concentrates the flavors tremendously. If you are fortunate to be visiting Primehouse when they’re offering a tasting of all three ages – 40, 55, and 75 days – you will be surprised at how the 40 day aged steak, usually tasting so wonderful and lush, pales in comparison to the 55 and the 75 day aged steaks. The flavor of the 75 day steak is, not to overstate, life-changing: well, maybe there’s a bit of an overstatement, but you may never have such a flavorful steak again. So beware, because just as the Excellent is the enemy of the Good, after having this steak aged 75 days, you will think all others are less than they should be – and you’d be right! 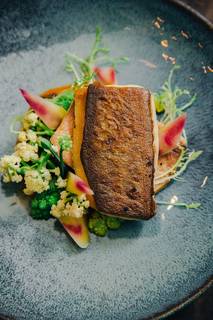