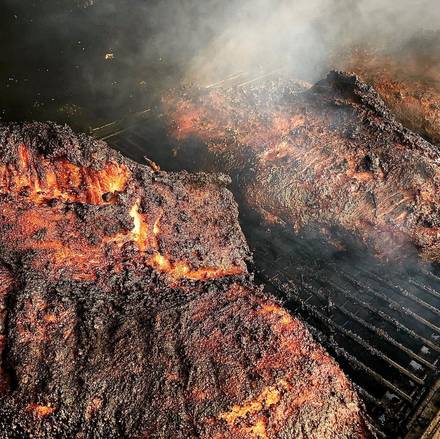 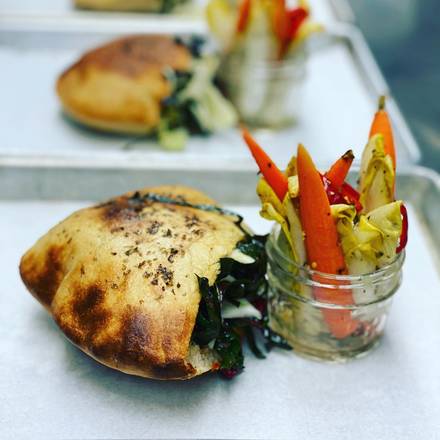 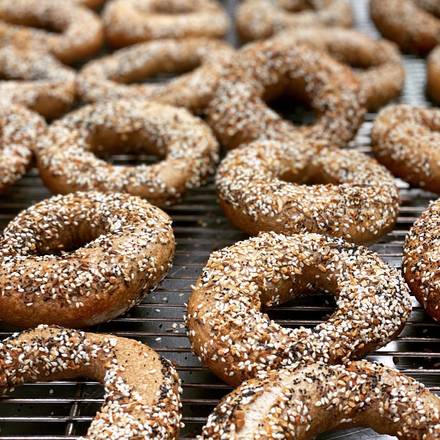 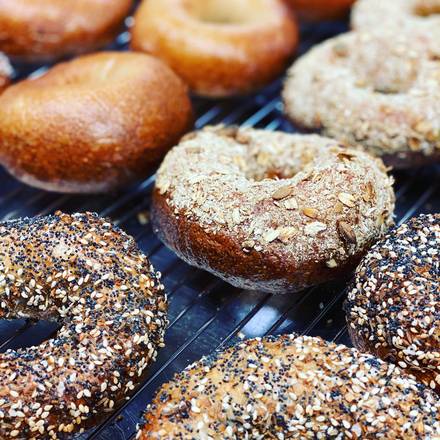 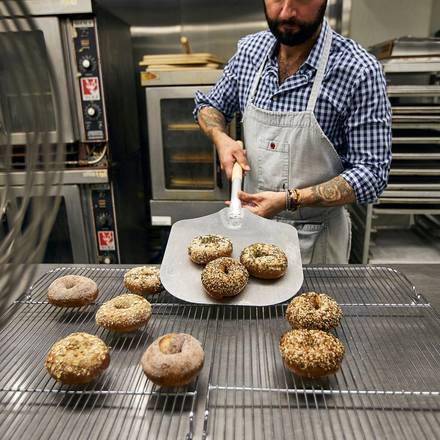 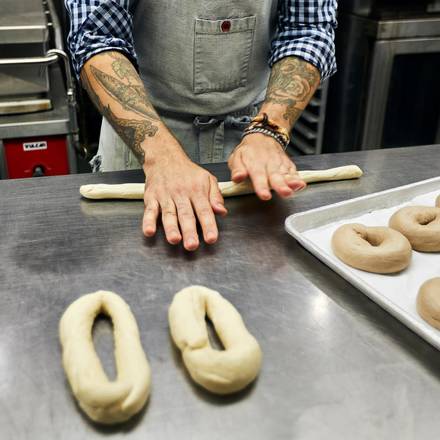 Chicago has never had a strong deli culture. Now, all that’s changing, and the city boasts some of the best delicatessens we’ve ever had, and there are a number of them. One of the newest and best of this new wave is Rye Deli & Drink.

Rye Deli & Drink serves up some outstanding renditions of the classics, like matzoh ball soup, pastrami, corned beef and the Reuben – but the select ingredients and meticulous preparations far exceed anything you’ve probably enjoyed in delis, even in places like Brooklyn.

Baking the bagels and smoking the meat in-house makes a huge difference, but Rye & Deli also serves such unexpected deliciousness as Wagyu sirloin with harissa, wilted spinach, and tahini aioli, as well as their signature brik, a crunchy Tunisian crepe made of free range egg, fingerling potatoes, fresh thyme and dill.

There are also some original dishes on the menu like roasted butternut squash with tahini and fava bean hummus with dates.

Try to find a deli, anywhere, that offers such a broad and creative collection of cocktails and other spirited beverages, several named after what we’re guessing are favorite movies of the owners, like Once Upon a Time in Mexico (on the rocks with Diplomatico white rum, coconut, fresh lime, and bitters) and Clockwork Orange (Tito's vodka, fresh carrot juice, aquavit, and lemon). These cocktails are available by the glass ($10), quart ($45) and gallon ($165).

There is a somewhat surprisingly broad selection of beer and wine…and, of course, some outstanding coffee options, including nitro and cold brew on draft, and a fine selection of caffeinated and decaffeinated teas.

And then there are the bagels, made in house and enhanced with some innovative smears like labneh and melted leeks; burnt eggplant with garlic, lemon and pomegranate; fava bean with preserved lemon; and charred strawberries and honey. Try finding anything like that in a traditional deli.

As Chef Billy Caruso explained to Eater Chicago, ““It’s not that I think there’s something to ‘fix’ in a Jewish deli. We just want a lighter version that’s chef driven. We’re making it more health conscious, thinking a little more about the ingredients.”

Suffice to say, at Rye Deli and Drink, you will experience some of the best deli food you’ve ever had, anywhere. 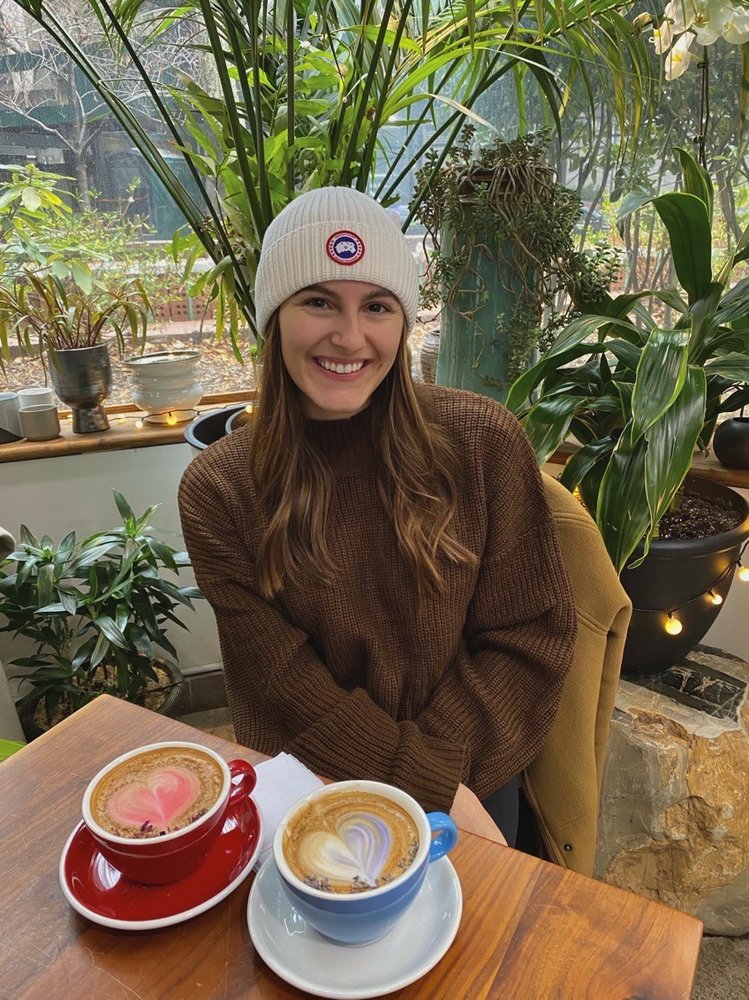 Rye is one of my all time favorites in Chicago. Their staff is incredible and so is their food. They have a nice bar selection as well. Their bagels are...

I am from the East Coast originally and have been on the hunt for the perfect bagel for some time now. Well, my mission is complete and I have to look no further. This thyme and salt bagel is one of the best I have ever had. 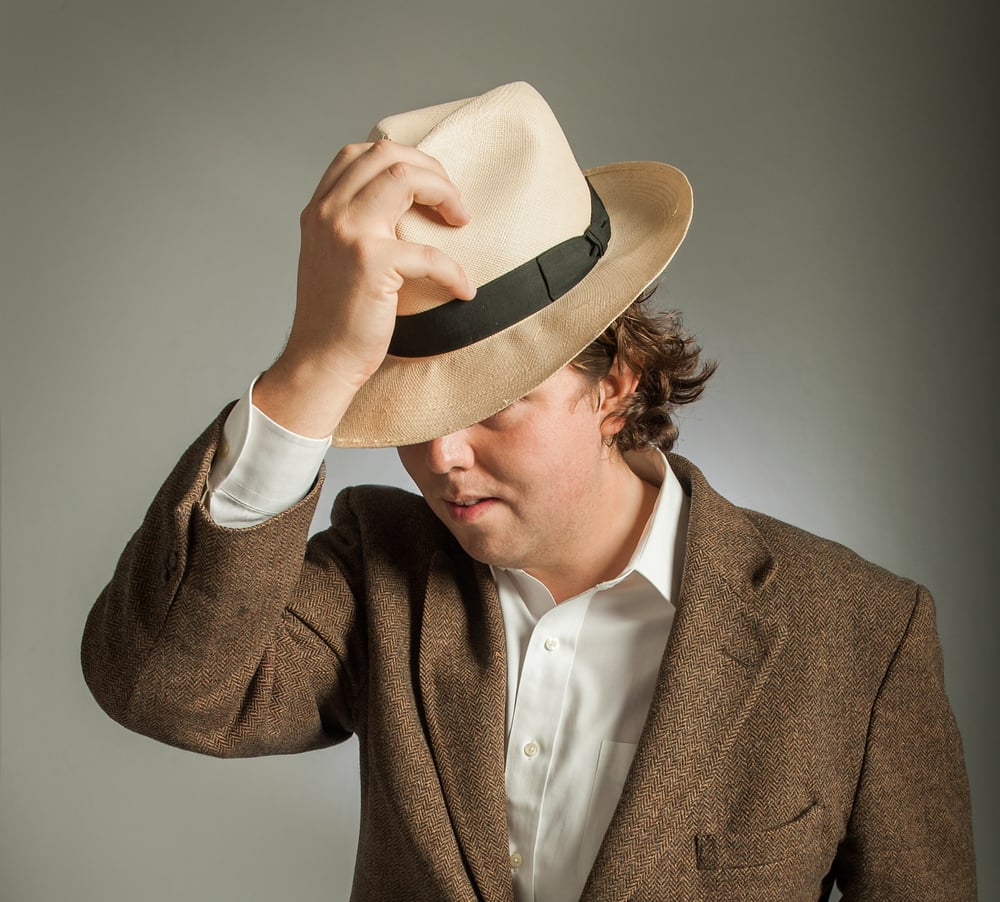 This place is on the lists as one of the best new bagel places in Chicago, so we ordered their delivery box to host some guests. It's really perfect for...

Kathleen and Paul made our experience awesome! the food was so good and we were a little confused by the extensive menu but they explained everything in great detail. I would highly recommend this place for the fresh ingredients and awesome staff/ customer service. :)

Went for lunch and ordered the Jerusalem burger and beer. Must say I was not expecting much for a burger in a pita bread, and even more so when I realized they cut the pits so there is no pocket, but - it was really good 👍. The burger was perfectly done and the cheese and veggies really add to the flavor. Tip of the hat to you Rye Deli 🎩 Atmosphere, service and the time it took the food to arrive were also great and I will probably come back 😋

Great coffee and friendly staff - but most of all, the Pastrami Sandwich!! OMG Absolutely delicious!! I would've posted a photo but I ate it too quickly. So looking forward to trying their homemade bagels and matzo ball soup. So glad these guys are so close to my office. 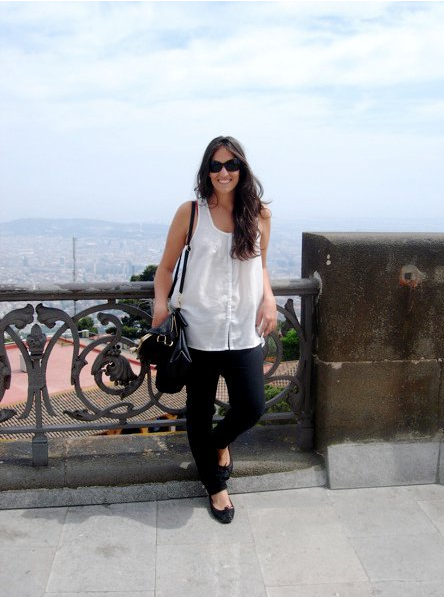 Love Rye Deli, especially their pastrami sandwiches and their dips (the melted leeks labne is a total winner). Their cured lox was also excellent and their...

At first glance, menu prices look incredibly high. However, if you go for a quick and easy bagel and coffee in the morning, prices are reasonable. Bagel and cream cheese flavors are different and exciting, and there are lots of combinations. With that in mind, when you order a bagel, both for takeout or dine in, they do not cut the bagel or spread cream cheese in for you. They provide utensils to go upon request, and the cream cheese comes in a little cup. Bagels are really only flavored on the top so if you eat your bagel one side at a time, one side will be full of flavor and the other side will be a more plain flavor. With that in mind, the interesting flavors will keep me coming back when I’m in the mood for an adventure in the morning. 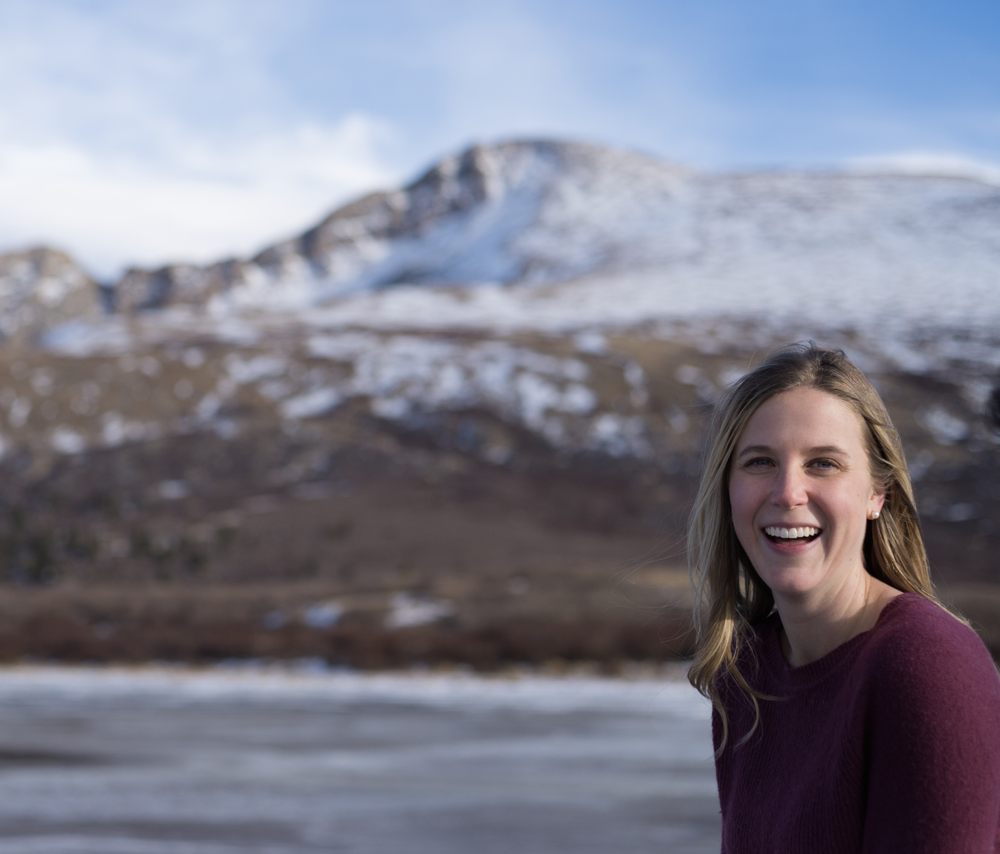 Some friends took us here for a morning breakfast - walking distance from their apartment in West Loop. How fun! The concept is bagels - bagel sandwiches...

Cold bagels! First time we ordered, we thought it was a mistake. Dine in and get served 2 cold uncut bagels 🥯. We came back because this place looks really cool and the coffee is delicious. Then it happened again. I ordered a bagel sandwich (happy tree) even though it's a hot sandwich...the bagel was cold (not room temp) cold like it was in a refrigerator. My wife got an everything bagel and cream cheese... it came on a tray since we were dining in, cold and uncut. You have to order through a QR code at the table so there is no server to speak to or the menu doesn't offer options to toast the bagel or cut it. We called out to the guy who quickly dropped it off to ask, are they supposed to be cold? but they were busy and it was loud in there. Are cold bagels a New York thing? Prices are reasonable, huge menu to choose from, just miss that server service where you can customize or ask questions 😉 like cut and toast my bagel please?

A very enjoyable meal made with high quality ingredients, prepared well, clean surroundings and great staff! Highly reccomended, as you will not be disappointed. The outdoor seating was pleasant and kept clean and presentable. It is clear that ownershio/management take pride in their establishment and take seriously their mission of providing world class food at fair pricing. Glad we stopped. WELL DONE 'RYE DELI' !!!

Their bagels are really, really, really good (well, tried only the plain one with salmon & labneh but I can already get a sense of their bagel quality. Definitely top notch). Every bite is in heaven. Reuben Sandwich is a little bit too greasy and salty. The beef is already fatty and smoky so I’d really like it if the bread can be plainer. I’d for sure come back for their bagels. 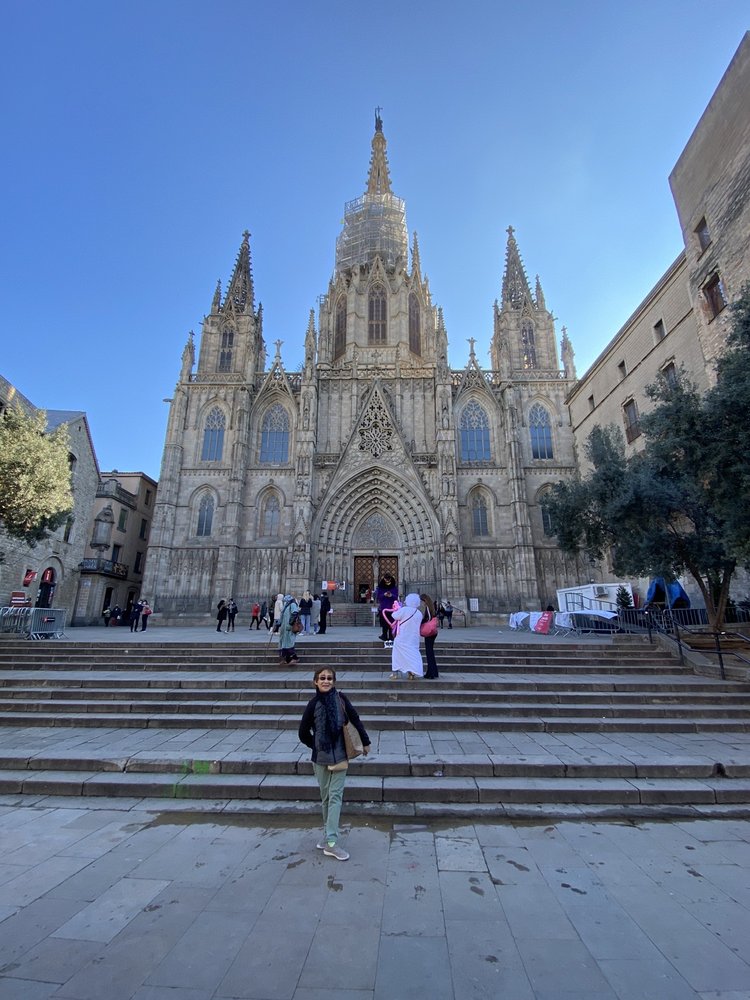 Rye Deli is a beautiful newish place at 25 S Halstead open since November of 2020. Kudos to the new owner for opening a beautiful place w/good food in this...

Ordered food ahead for pick-up but also ordered a couple of drinks while waiting. Nice open view of the kitchen. Not your typical bagel spot as the quality of food goes above and beyond, and the menu and flavors are very unique. Friendly staff on deck who provided some insight on the restaurant and its future plans. Also randomly assisted in a blind tasting test for Bloody Mary mix. Will come back to try other handmade bagels and labneh! 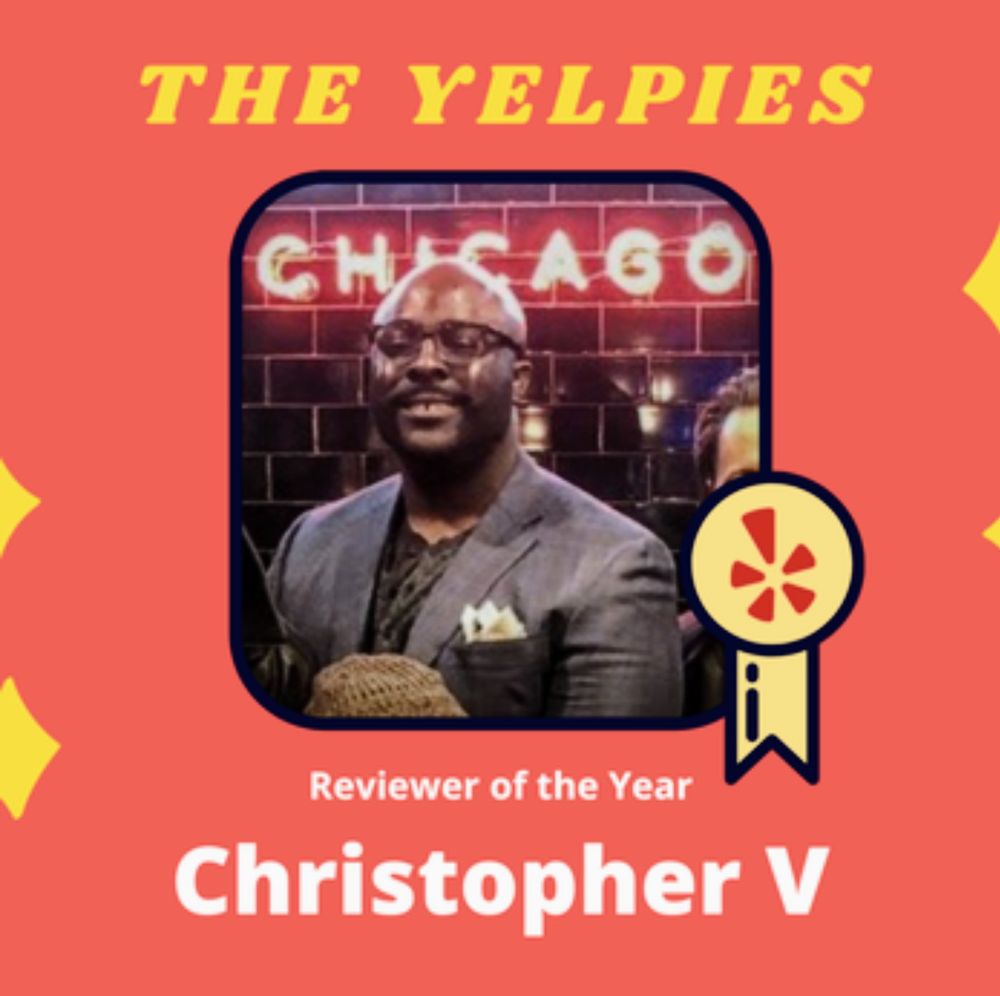 Outstanding food and service. Now that the legendary Fumare's is no longer with us, Rye Deli serves up the best pastrami in Chicago. So many restaurants...