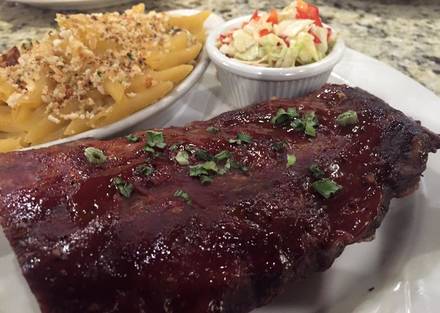 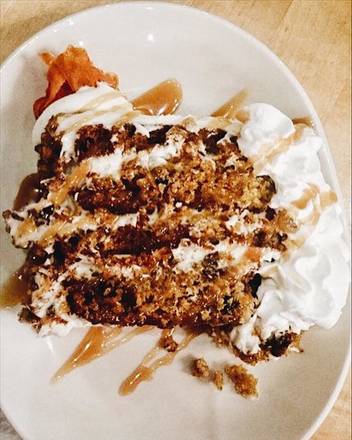 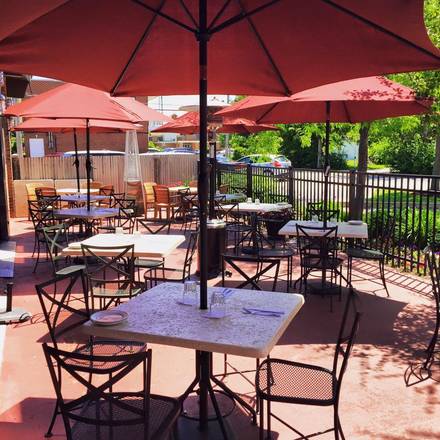 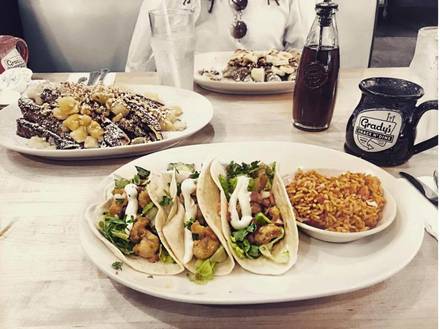 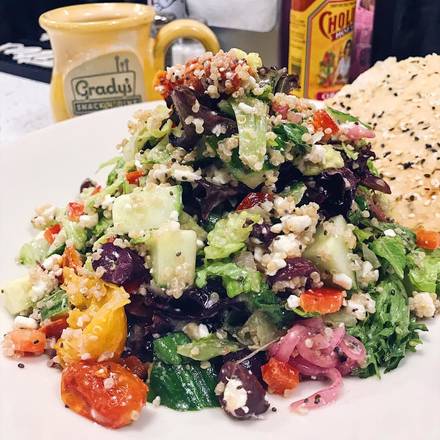 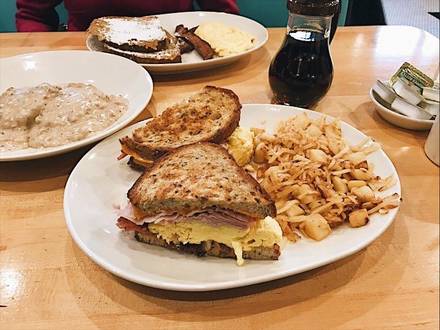 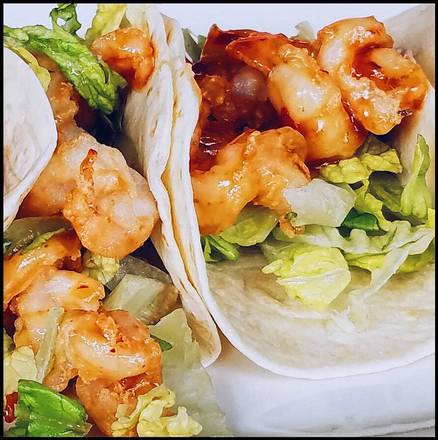 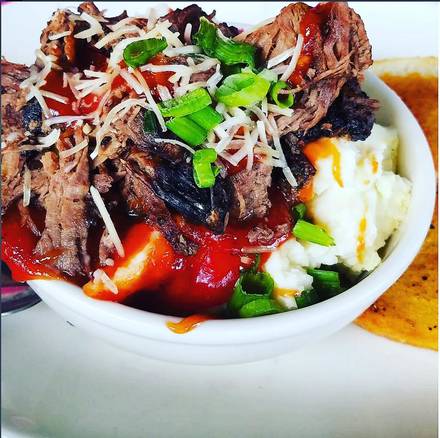 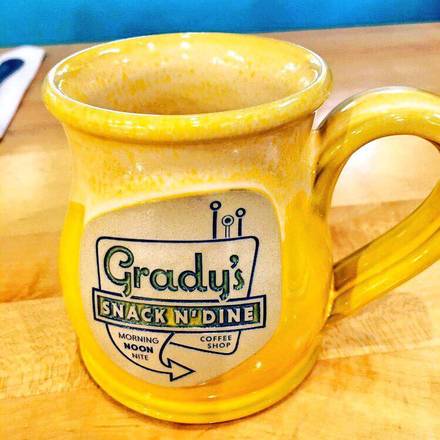 Grady's Snack located in downtown Homewood, across the street from the Metra Station and The Original Aurelio's Pizza.

I was welcomed by the warm atmosphere and cute decor. That impression was furthered by the efficient, friendly service. I also received my fresh delicious food promptly. What more could I ask for? Well…when I first ordered one of the specials (Short Ribs n’ Eggs) I was informed that they were out. So I ordered my back-up option of the Carne Asada skillet with modifications and additions. I wasn’t a fan of the pancakes as they were missing something, and were a bit too “light” for me, but that wasn’t a deal breaker. Good portions and they got my changes absolutely correct! Btw, I went at 9:25am on a Monday morning. Wasn’t crowded but plenty of people there.

Been coming here often dine in is nice. This time I had take out ordered a steak skillet so I’m expecting steak in there, there’s literally 10 pieces of steak in this skillet, if I wanted a veggie skillet I would of ordered that. Overloaded this with peppers but there’s barley steak. Edit—- after separating it I only found 4 thin slice beef stips more photos added

I guess it being Sunday they don't know how to manage the breakfast rush hour. Over an hour wait time to be seated. Theres limited parking. Our party of 10 had to sit separately, because staffing continued to sit smaller parties before seating us together. We didn't know who our waiter/waitress was. When that was figured out, our food was brought out in increments, missing items here and there. They did not bring out eating utensils and the waitress did not come to check on us for drink refills. A table that came in maybe 20mins after us received their pancakes before we did from the same waitress. It isn't like the place is understaffed. I counted maybe 12 employees on the floor, but maybe it's the age of the employees. They all look very young and there's no way of distugishing who the manager is. I don't know how many cooks are in the kitchen, but service is very slow. The food is delicious but it doesn't have anything that sets it apart from other breakfast places with better service. I won't be dining here again.

We were seated right away, however I guess our skin color didn't warrant us service because 12 minutes later another party was seated and received service right away. After waiting 20 minutes I decided to leave and go down the street to Blueberry Hill where we were greated with a smile, seated, acknowledged and order placed within 10 minutes. I don't like to jump to race in these particular situations, but it seemed pretty apparent to me. The 1 star was for the spacious dining area.

This is a great breakfast and brunch place! Muchos trabajadores y meseros hablan español también, y el menú contiene varias cosas Mexicanas. The covered outdoor seating area is huge and makes it a great place to enjoy a summer-time meal. They also have alcohol on their menu, and bottomless mimosas on certain days. Their portion sizes are great for the price and the staff is always very welcoming and kind. I've gone three different times around 11am and I've been seated immediately, since the place is large and has plenty of tables. Overall, this place is a great vibe and their quality of food is amazing.

Nice little local restaurant. I enjoyed the food and the service was nice too. I will definitely go back again.

We've had the pleasure of dining at Grady's Snack N' Dine in Homewood multiple times. Every time has been an incredible experience. The staff and the atmosphere are amazing and the food is off the charts. Everything is ALWAYS so fresh and made to order. I would highly recommend this restaurant to anyone in the area and traveling through. Top notch!!

First time here had a wrap, Delicious. Children had pancakes and bacon very good. Tried the Mimosa very good! Got a little tipsy off 2 drinks ! The had a nice set up to take pictures for Mother's day.. it was soo pretty..

I recently went to Grady’s for the first time. I must say the food and service were both good. We were seated right away on a Saturday morning. The waiter was pleasant and very knowledgeable about the menu items. I will definitely go back again.

From the first time you step into Grady's, you'll feel right at home. It's like a family gathering in the kitchen.The staff is pleasent and friendly. Even on a busy day I've never gotten an order so fast. They have an amazing beverage selection. The food is qaulity. I don't know who Grady is but I'd like to thank him personally. It's that good! Highly recommend.

One of my favorite breakfast spots! They have good food, so fresh & offer such a wide variety. Friendly service and freshly squeezed orange juice is so yummy.

I made a lunch order online, and came to pick it up right on time. But it wasn't ready. 10 minutes later it wasn't ready. People who came AFTER me picked up their food and left. 20 minutes later another person who came AFTER me picked up their food and left. 40 minutes later, I was still waiting. I sat at the counter, and they didn't even have the courtesy to offer me some water while I waited. 45 minutes after it should have been done, my order arrived 3 hamburgers and some cake. So, not exactly a complicated order. A manager graciously give me two of my three desert orders for free. That's sarcasm BTW, he did about the absolute minimum he could just to shut me up. When I finally got home, the food was barely warm, the fries were a mush, one order of fries was missing but that was OK, because they were awful. The cake is probably defrosted from frozen. I'll never be coming back again. The food is strictly decent, nothing amazing. If you dine there, you'll probably be fine, but they were utterly incompetent at handling online orders.

The Platinum Queens came out and would like to represent for Grady's! We had such a fun time! The food was absolutely amazing! I had a chorizo skillet with a bomb 💣 a$$ bloody Mary. My friends had southwest skillet, veggie skillet, and a meat lovers skillet. Sides, pancakes, cheesy grits, bananas foster. Their drinks were an assortment of different flavors of strong island ice tea. I've been back a few times since. I highly recommend dining here. It has a nice fun family atmosphere.

ABSOLUTELY AMAZING! I dine in AND order through Uber Eats, Door Dash etc...I've tried almost everything on their menu. Their food is delicious. The restaurant is warm, cozy, and inviting. Staff members are excellent - customer service is top notch! Definitely a neighborhood staple. They also serve alcohol! The mimosas are incredible - they have several flavors. Breakfast, brunch, lunch, dinner, or snack, stop in ASAP - you won't regret it.