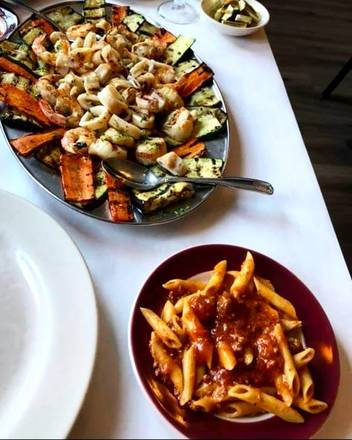 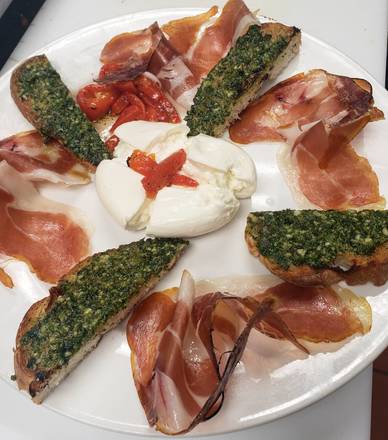 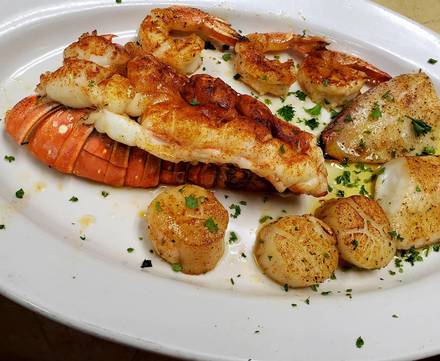 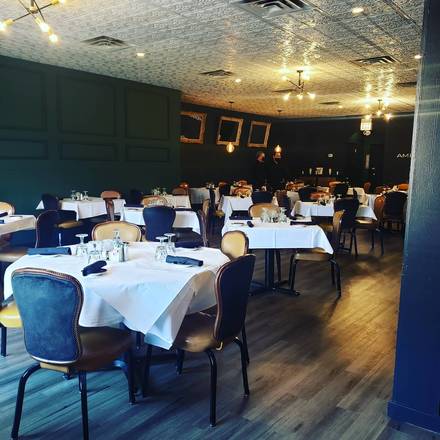 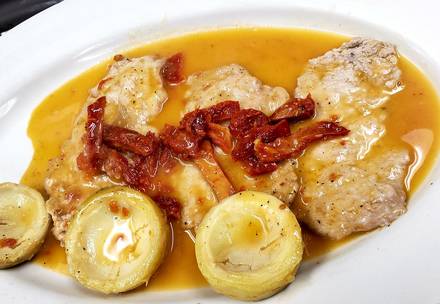 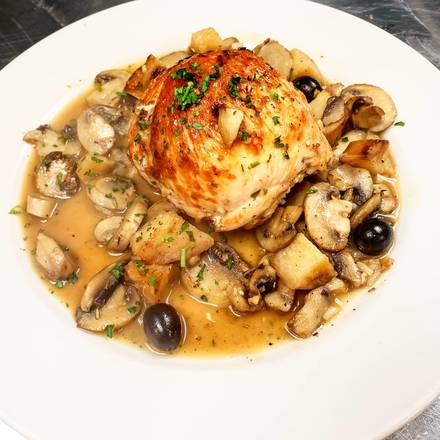 Chicago mourned when Sabatino’s, a beloved Chicago Italian restaurant, closed. Then, the collective heart of the city rose hopefully when Chef Joel Piedra, who worked in Sabatino’s kitchen for thirty years, opened Avvio to serve classics like Shrimp DeJonghe and Baked Alaska.

Avvio is billed as an American Italian – rather than an Italian American – restaurant, and this sight change in nomenclature signals that American classics share the menu with Italian classics. Sure, there’s baked clams and calamari, but there’s also Oysters Rockefeller and a Prime New York Strip Steak.

For a newly opened restaurant, Avvio has one of the most ambitious menus we can remember. There are, for instance, over a dozen veal dishes, including familiar ones like Breaded Veal Cutlet and Parmigiana, but also less familiar/more inventive versions like Veal Braciole, which features the rolled meat with prosciutto and sausage in mushroom sauce, as well as Veal Montecarlo with asparagus, prosciutto, eggplant and artichoke.

In the red meat section, there’s an Aged Bone-in Rib-eye and, for two, a Chateaubriand or a Rack of Lamb. If you prefer your red meat dressed up a little more, there’s a Chopped Sirloin Steak with blue cheese and onions and a Filet Mignon Meuniere.

Of course, there are many pasta dishes to choose from, including house-made ravioli, tortellini filled with shrimp, crab, and cheese, as well as fettucine, lasagna and all the other Italian noodle classics.

And about classics, there are a few classic American dishes that you must try, like Shrimp DeJonghe and Baked Alaska.

Like chicken Vesuvio, Shrimp deJonghe is one of those dishes that might cause you to wonder, “Really? No one – like in maybe Greece or Italy – thought of sautéed shrimp with garlic and butter before Shrimp de Jonghe became a regular menu item?” There’s little doubt that someone did, indeed, think of this dish before it showed up on the menu of Chicago’s DeJonghe Restaurant, but it was there that the dish was so named, and that name has stuck. As at Sabatino’s, the Shrimp de Jonghe at Avvio is prepared in the traditional manner, with the shrimp baked with garlic, butter, and breadcrumbs. It is lovely...and there are many other fish and seafood dishes, including Browned Dover Sole and Norwegian Salmon.

Baked Alaska is ice cream (that’s the Alaska part), perched on cake, enclosed in meringue and then quickly baked so that the meringue browns up. As with a hot fudge sundae, with Baked Alaska you have a dish that’s as hot as summer and as cold as winter (and as Alaska). This dish requires a fair amount of skill to make, and when it’s flamed at the table, as it is at Avvio, you have a spectacular end to a meal.