In case you aren't already pumpkin'd out this season, take heed that October 26 is National Pumpkin Day apparently. Rather than phone it in with pumpkin pie or pumpkin lattes (egad!), head to Tanta to try something more unique. The Los Picarones dessert is South America's answer to pumpkin doughnuts, made by frying pumpkin and sweet potatoes together into toothsome, finger-licking fritters with spiced chancaca syrup. It's the perfect antidote to pumpkin fatigue. 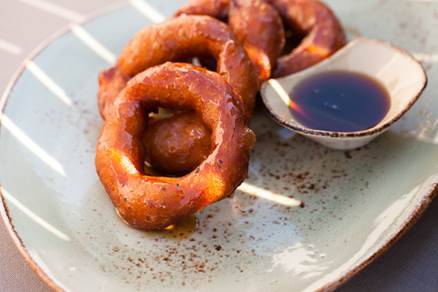 Hot on the heels of the rising tide of Portuguese cuisine in restaurants, Portuguese wine is ready for its closeup. And who better to provide said closeup than red hot Fat Rice? The envelope-pushing restaurant is poised to launch a Portuguese wine/winemaker dinner series on October 26 with an event called "Dinner in the Douro," featuring Joao Roseira of Quinta do Infantado from Douro, Portugal. Working in tandem with wine director Craig Perman, Abe Conlon and Adrienne Lo of Fat Rice hold court with a special wine tasting and dinner consisting of six meaty courses inspired by the Douro Valley. The dinner costs $160 per person and tickets can be purchased here.

Eat Kale at Mia Francesca on Clark
Everyone knows it's pumpkin season. You can't open a menu or walk down a grocery aisle without being inundated with orange gourds. But what you may not know is it is also Tuscan kale season, and this hearty vociferous veg deserves some attention. You can give it its dues at Mia Francesca on Clark all month long, where kale-centric dishes are on deck through November 2. The special menu serves as an homage to everyone's favorite hipster green, prepared in dishes such as slow-braised pork shoulder with sweet potato puree and braised kale; and kale-stuffed psta with roasted eggplant and ricotta.