'Tis the season for pumpkin carving! Back at it for their annual #LEpumpkinparty is Longman & Eagle, which plays host to a festive weekend party on Sunday, October 25, from 1:00 p.m. until 6:00 p.m. on the patio. The restaurant will provide a limited number of complimentary pumpkins and kits, but guests are encouraged to bring their own pumpkins and equipment for carving. Fall-inspired doughnuts, hot cider, and Vandermill Cider will all be on hand. 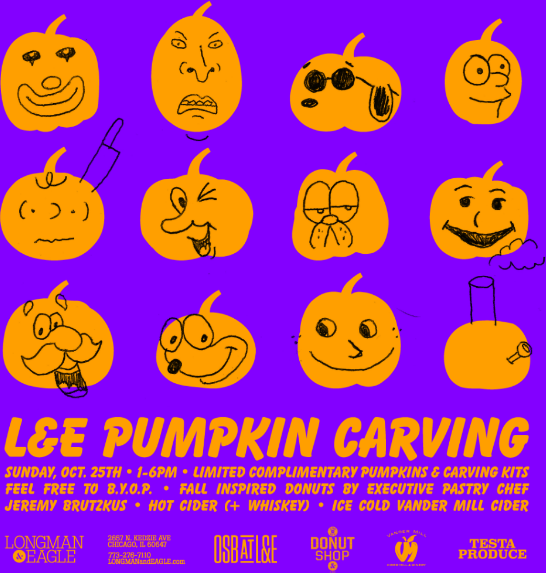 November is prime pie time. Which is why Katherine Anne Confections is gearing up for the holidays with a roster of pie-inspired truffles, caramels, and marshmallows. In preparation for the new fall menu, the Logan Square sweets shop is hosting a preview party on Friday, October 23, from 5:30 p.m. until 8:30 p.m. The open house-style event showcases a miscellany of Thanksgiving-flavored delicacies to be released next month. Truffle flavors include apricot-quince pie, black forest pie, pumpkin cheesecake, cranberry-rosemary chevre, caramel banana cream pie, maple pecan pie, and cherry pie; caramels include vanilla-sesame, miso-ginger, cinnamon-blood orange, Earl Grey tea, and praline pecan pie; and marshmallows are brown butter and brown sugar-grapefruit. The cost to attend is $30 per person, which includes an evening of beverages, savory bites, and sweets samples. Call the shop to reserve a spot, since space is limited. For those who can't attend the party, customers can order the new treats as a preview party to-go box.

Bloody Mary Bar at The Allis

Weekends are all about the Bloody Mary. It's even better when said Bloody is stocked on a bounteous bar filled with customizable accoutrements and garnishes. As a potent accent to their Sunday brunch program, Soho House's The Allis has rolled out their fully loaded Bloody Mary bar, available in four styles or as a DIY option, with items like Bloody Mary ice cubes, giardiniera, and even Goldfish crackers. The four house styles include Hair of the Dog with mustard and horseradish; the Bloody Maria made with tequila, lime, chipotle, and adobo; and the Allis Snapper with Bombay Sapphire, pickle brine, and celery bitters.