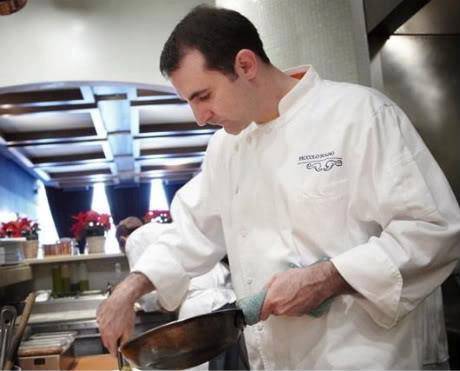 Plane fare to Sicily may be tricky to finagle, but at least you can close your eyes, sip, and pretend you're there at Piccolo Sogno Due. Chef Tony Priolo and co. are hosting Silvio di Silvio, the North American Director of Donnafugata winery for a special Sicilian wine dinner on September 16. The mutli-course wine-paired meal includes a reception at 6:00 p.m., followed by dishes such as poached cuttlefish, herb-crusted Colorado rack of lamb, and cannoli with dried fig salad. The cost to attend is $90 per person. Reservations .


Alumnae Takeover at The Violet Hour

The Violet Hour was at the forefront of the country's craft cocktail boom when it originated nine years ago. The revered bar remains one of the utmost, a pivotal resource for top-tier mixologists honing their craft before going on to launch their own companies or bar programs. The Violet Hour kicks off an apt homecoming series on September 16, wherein once a month through the end of the year a different alumni mans the bar serving up timeworn cocktails and nostalgia. First up is Toby Maloney of Alchemy Consulting, followed in the subsequent months by the likes of Stephen Cole (Barrelhouse Flat) and Brad Bolt (Revel Room) on October 6, Michael Rubel (Henry's Swing Club) and Kirk Estopinal (Cure, New Orleans) on November 3, and Mike Ryan (Sable Kitchen and Bar) and Ira Koplowitz (Bittercube, Milwaukee) on December 1.


Forget apples and pumpkins for a second. September also kicks off mussels season, and you know you want to indulge. Aptly, Chez Moi is running its annual Mussels Fest, aka Moules Fest, September 14 through 18, featuring all-you-can-eat mussels and frites. Chef Dominique Tougne is cooking up three varieties of mussels for the week, including marinieres mussels with white wine, shallots, parsley, butter, and lemon; Belgium mussels with beer, cream, and bacon; and Mediterranean mussels with tomatoes, saffron rice, onions, and basil. For $25 per person, feel free to binge.

Lillie's Q Pie at Lone Wolf
Lone Wolf continues its monthly series of guest chef savory pies with a Southern-style special courtesy of Lillie's Q's Charlie McKenna. Available through the duration of September, the current dish is a crawfish and smoked pork pozole pie, with proceeds from the pie going towards the Katherine McKenna Brothers Foundation, a McKenna family charity that honors a relative who died of breast cancer and provides scholarship for the all-women's school Brenau University in Gainesville, Florida.