Chicago loves its tacos. A quick scan of the city's thriving taqueria scene and hipper-than-thou chef-driven taco spots will confirm that. So National Taco Day is basically a tortilla Thanksgiving. Taking place this Friday, October 4, the holiday provides plenty of added incentive for Chicagoans to go forth and eat more tacos than they normally would on any given day. From Taco Day promotions to places that are just damn good, here's where to eat on National Taco Day.


Nacional 27 restaurant has been a staple in Chicago's contemporary Latin scene for years, thanks in part to their taco talents. Flavor combos skew a tad more upscale than your standard taqueria fare, and they pair wonderfully with Nacional's esteemed cocktails. For Taco Day, the barstaurant will offer half-priced mini tacos from 5:00 p.m. until midnight. Chef Chico Vilchez's offerings include queso with pepper Jack, mozzarella, and roasted poblano; barbecued lamb with organic agave and avocado salsa; grilled beef tenderloin with spicy tomatillo salsa; and shrimp and scallops with avocado, lime, and romaine lettuce.


There are plenty of taco promos to go around at the always-bustling Taco Joint(s). Both locations partake in Taco Day by featuring three tacos for just $5 from 3:00 p.m. until 5:00 p.m. Think of it as a taco happy hour. Later on, tacos are $2 a pop after 10:00 p.m. Any guests who post an Instagram photo of their tacos with the hashtag #tacoday will earn free chips, salsa, and guacamole. Lastly, patrons can pair their tacos with a can of Tecate and a shot of El Jimador tequila blanco for $5. The taco selection ranges from enchilada with salsa verde pulled chicken, tomatillo pico, and crispy queso Chihuahua to michelada with beer-marinated flank steak, arugula, green onions, and sangrita salsa. 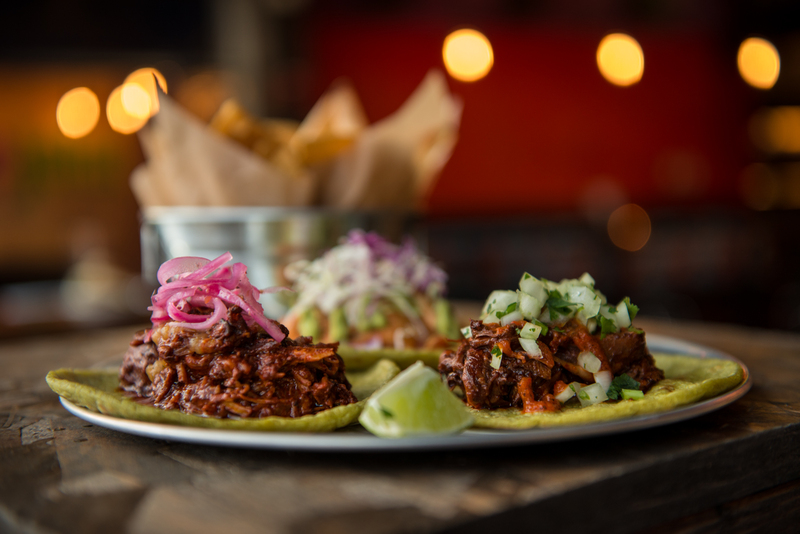 (Eat these tacos at Taco Joint)


One of the coolest spots in town for chic tacos is Mercadito, and what sheer awesome coincidence that the clubby Mexican restaurant is celebrating its fourth anniversary on National Taco Day! In the past year alone, Mercadito served 129,717 tacos, so clearly they're doing something right. Despite the fact that they're a sceney spot in the heart of River North, where they could easily get away with tepid club grub, Mercadito goes the extra mile to employ matriarchal Mexican ladies to make tortillas from scratch. The attention to detail goes a long way, and it's what makes their tacos so special, available in atypical flavors such as lemon-poached lobster, wild mushrooms with tomato sofrito, and rosemary-marinated steak with crispy Manchego (it's like a cheesesteak, but Spanish, and with a tortilla). On Taco Day, the restaurant will celebrate with special anniversary cocktails, plus deals on tequila shots, party favors, a DJ, and special gorditas.


Some of the best tacos in town can be found at Antique Taco, the Wicker Park spot filling the very real niche that is taqueria/antique shop. When this place first opened, I had my doubts. The name alone sounded odd. But that was just me judging the book by its cover, which I hear you are not supposed to do. A meal at Antique Taco is so much more than a typical taqueria experience. The space is spiffy, chic, and refined, with a chef-driven menu to match. I always feel that their tacos are not just tacos, but composed entrees that happen to be folded into tortillas. Chef Rick Ortiz is a wunderkind when it comes to flavor combinations and textures, melding market mushrooms together with pumpkin seeds and guajillo cream, or sweet and spicy chicken with cucumbers and honeyed yogurt. Then there's the marshmallow-light fish tempura, which crackles ever so gingerly alongside sriracha tartar sauce, smoked cabbage, chives, and sesame. Do yourself a favor and eat all the tacos here on Taco Day.


Just down the street from Antique Taco is one of my favorite restaurants to open within the past year: Takito Kitchen. Although it has the soul and inspiration of a taqueria, it carves out its own niche entirely. Under the direction of deft chef David Dworshak, Takito features seasonally inspired, locally sourced cuisine with a Mexican accent. It's really just a well-operated chef-driven restaurant that happens to hone in on a cusine more commonly associated with casual street food. The Division St. spot does a good job of echoing those sentiments via its graffiti-strewn walls and "street" vibe, albeit one that is mighty sleek and sexy. The intricate menu is quite impressive, proving that there is a lot more to tacos (and other Mexican eats) than al pastor. Dworshak serves things like lamb chorizo tacos with tomatillo-pistachio salsa, beer barbacoa tacos with tamarind, peanuts, and chayote, and chicken pepian tacos with pumpkin seed mole and summer beans. The real stunner is the crispy redfish taco, served on a lustrous hibiscus tortilla with carrot-jalapeño slaw, basil, and coconut custard. Make this your Taco Day crown jewel.