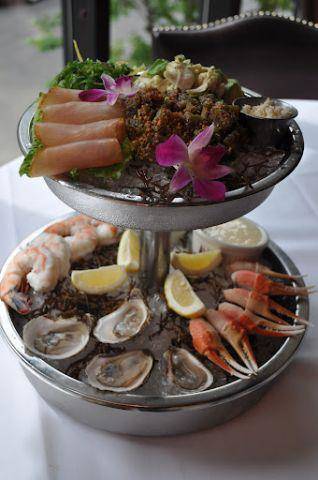 When it comes to elevated seafood towers, it doesn't get much more apropos than The Signature Room. Because seafood towers atop the Hancock Tower is the stuff of nautical fairy tales, and the fact that guests are essentially eating towers within a tower is too perfect; it's like an edible Russian nesting doll. Here, chef Cardel Reid stacks his chilled towers with whole Maine lobster, a dozen oysters on the half shell, a dozen jumbo shrimp, and one pound of snow crab claws. Eat it all up while drinking in the view.

Steak may get top billing at Mastro's Steakhouse, and rightfully so, but don't overlook the oceanic components on this meat-centric menu either. The appetizer menu is swimming with pristine shellfish and seafood, from chilled shrimp and Dungeness crab cocktail to oysters on the half shell, snow crab claws, lobster cocktail, and more. All or any of this is available in the form of a customizable seafood tower, wherein guests create their own versions with desired selection of seafood.

Another steakhouse stacking up an exemplary seafood tower is Swift & Sons, which customizes its cold platters per party size and charges per person. Rest assured, though, you’ll get plenty of shrimp cocktail, mussels, bay scallop leche de tigre, king crab, and oysters.

Maude's Liquor Bar does a masterful job with fresh seafood. The hottest French-inflected eatery and bar on Restaurant Row is the stuff of sleek bistro dreams, which obviously includes hulking towers chock full of shrimp, mussels, king crab, and oysters.