There are few things more patriotic than porcine gluttony, which is why you should make like Paul Revere on his midnight ride and race over to Mercat a la Planxa for whole pigs for the Fourth of July. Pulled pork barbecue is so formulaic, so why not take a cue from the Catalan and celebrate our nation's independence by binging on whole-roasted hogs from one of the city's best Spanish restaurants? Think of your meal as a United Nations summit.


At Mercat a la Planxa, chef de cuisine Cory Morris starts by de-boning pigs and stuffing them with marinated pork belly for some serious pork-on-pork action. He glues it all together (meat glue, not Elmers), wraps it in banana leaves, and roasts it for six hours. The result is a succulent feast fit for a president. Since it's de-boned, it makes for a great buffet-style group meal. The pigs are available to-go, and they come with grilled green onions, herb-roasted fingerling potatoes, and rosemary white beans. Pigs must be ordered 72 hours in advance for pick-up or to dine in. 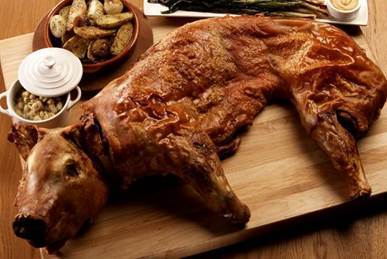