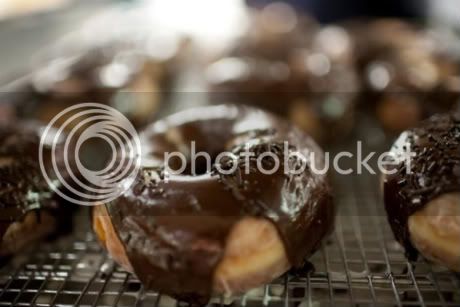 If you have to ask yourself “What magic are they putting in the batter at Doughnut Vault to convince customers to wait in 100+ people lines,” then you’ve probably been hiding under a bridge for the last few weeks or so.

Owner Brendan Sodikoff (a former LEYE chef who also owns Gilt Bar and Maude’s Liquor Bar) hired a former Krispy Kreme exec as a consultant and Francois Gras as the “doughnut chef” to take the tasty treat to the next level. The tiny space is tucked inside of Gilt Bar, which means that only about three people can squeeze in at a time. Therefore, most folks simply trot up to the walk-up window to place their orders.

For now, hours are 8-9am Tuesday-Saturday, as Gras cranks out chocolate and vanilla glazed, cinnamon sticks, butterscotch and Old Fashioned cake doughnuts. There are plans in the works for late-night hours, but that won’t happen until late spring or summer. Doughnuts are $2-$3 and there is a minimum of six. Cash only.

Well-known private chef Julius Russell finally opens his own shop, and it’s in his beloved South Loop neighborhood. Flavor 180 offers a good variety of Chilean- and Caribbean-focused fare, but we’re particularly curious about what the “Chile Dog” tastes like.

The menu is also divided into “Nice” and “Naughty” categories; with grilled fish, turkey hot dogs and tacos on one side and catfish nuggets, mango Jerk wings and an Asian Cajun turkey burger on the other. Chilean wine and beer are coming soon, and Flavor 180 Food Trucks will be rolling the streets serving up much of the menu by the summer.