8 Days of Thanksgivukkah in Chicago Restaurants

Hope you didn't binge too much on Halloween candy, because there's another belt-bucking holiday coming up fast. With November upon us, Thanksgiving is mere weeks away, which means you're probably stressing out about burning down your home due to errant turkey cookery. Consider saving that for another year and opt instead to visit one of the restaurants serving Thanksgiving dinner in Chicago. Numerous dining styles and menus abound, so there's something festive and delicious for everyone. Here's a list of restaurants cooking up Thanksgiving fare in Chicago.

Thanksgivukkah!
Fun fact: Thanksgiving and Hanukkah fall on the same day this year, a phenomenon that pretty much happens once in a blue moon. Suffice to say you won't live to see the next time they overlap.

(RNS) It last happened in 1888 and, according to one calculation, won’t happen again for another 77,798 years: the convergence of Thanksgiving and Hanukkah. 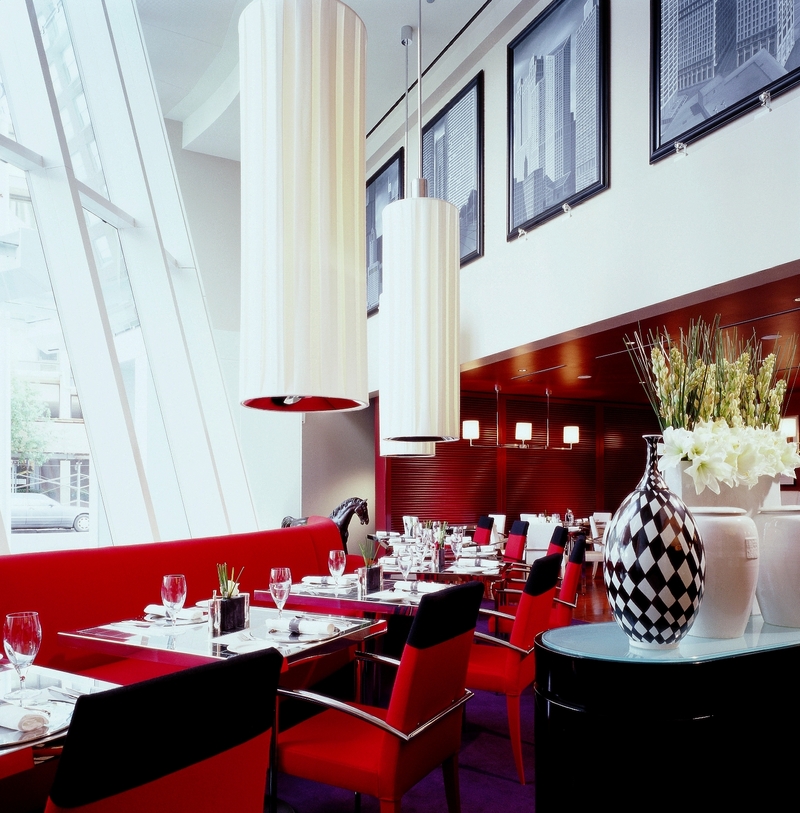 Take advantage of the double holiday whammy at Bistronomic, the rare restaurant to take on the brave duty of preparing two thorough holiday menus for the occasion. Diners can opt for a three-course Hanukkah prix fixe or a three-course Thanksgiving prix fixe. Each menu adds a French accent to timeless holiday flavors. Chef Martial Noguier's contemporary take on Hanukkah cookery includes warm cured Faroe Island salmon with fingerling potato rosti, salmon caviar, and lemon crème fraîche; prime glazed beef short ribs with Brussels sprouts, citrus-carrot puree, and stone-ground mustard sauce; and apple tarte Tatin with fried phyllo and butterscotch. For Thanksgiving, Noguier goes above and beyond by offering one menu for meat-eaters and one for vegetarians. Guests select from a wide spread of dishes, choosing one plate per course. Options include duck confit with fresh cranberries, sweet potato puree, and orange reduction; parsnip root velouté with crème fraîche, caramelized apple, and brown butter; roasted turkey with chestnut stuffing, garlic mashed potatoes, and glazed quince; filet mignon au poivre with confit of red cabbage, caramelized onion puree, and cognac sauce; pear financier with brown butter and hot bittersweet chocolate sauce; and apple tarte Tatin with crispy phyllo and butterscotch. The Thanskgiving menus are available from 11:00 a.m. until 9:00 p.m. on November 28, while Hanukkah is only dinnertime. All menus cost $50 per person. Guests can also order Thanksgiving to go, with an order deadline of November 21. Call 312-944-8400 to place an order or make a reservation.


Chances are, when you were growing up, your Thanksgiving table did not include smoked eggplant puree and pumpkin verrine. Things get classy at Cafe des Architectes this Thanksgiving. Chef Greg Biggers and pastry chef Leigh Omilinsky blow minds with their elegant interpretation of classic Thanksgiving fare. For appetizers, guests select from the likes of a baby bibb salad with smoked eggplant puree, Marcona almonds, and tomato confit; artichoke soup with Smoking Goose lamb bacon and basil crème fraîche; seared foie gras with chestnut bread pudding and crème fraîche ice cream; and black truffle risotto. Entrees include turkey breast with cornbread stuffing, roasted Brussels sprouts, and chorizo jus; a fall vegetable tart with cranberry gastrique and housemade goat cheese; and pork tenderloin with braised cabbage, mustard sabayon, and sweet potato puree. For dessert, either white chocolate macarons with cranberry, almonds, and port wine; pumpkin verrine with caramel corn, bourbon, and sweet cream; or a Mont Blanc with pistachios, sweet chestnuts, and mascarpone. Just like the pilgrims used to make. The menu costs $65 per adult, $19 for children under 12.

Things skew a little more classic at Fulton's on the River, although chef Kevin Schulz still has a trick or two up his sleeve. Take the candied yams for example. Surprise! They're sprinkled with maple sugar streusel. Brioche stuffing sounds standard-ish, but it's studded with a salacious medley of pork sausage, apples, and parsnips. Buttered pecans serve to enliven a plate of braised Brussels sprouts, while turkey breast takes a trip to Flavorville via an apple cider brine and some mushroom-sage gravy. Dessert is pretty straightforward and comforting, what with hot apple crisp and pumpkin pie. Oh and herb-crusted prime rib, whole-roasted Atlantic salmon, grilled chicken breasts, and roasted pork shoulder are happening. The cost for all this succulent merriment? $42.95 for adults, $15.95 for kids.


Prairie Grass Cafe is a favorite holiday haunt. There's just something about the cozy lodge-like Northbrook restaurant that makes patrons feel right at home, sans the stress of actually being at home. Thanksgiving dinner at Prairie Grass Cafe is homey and traditional, albeit jazzed up with a few twists and turns thanks to chefs Sarah Stegner and George Bumbaris. Dinner starts with a choice between butternut squash soup or a mixed greens salad Thanksgiving'd with pumpkin seeds, Parmesan, pomegranate, and balsamic dressing. Things progress to oven-roasted turkey with mashed potatoes and gravy, apple-chestnut stuffing, sweet potatoes and butternut squash with housemade marshmallow topping, fresh vegetables, cranberry sauce, and choice of heirloom pumpkin pie, pecan pie, or double chocolate cake. Thanksgiving at Prairie Grass costs $49 per person and reservations can be made by calling 847-205-4433.


Buffet stations runneth over with Thanksgiving eats at deca RESTAURANT. The restaurant slings its holiday wares all day long, starting with brunchy dishes at 11:30 a.m. and rolling out heartier, more dinner-focused items throughout the afternoon. Diners can peruse selections of omelettes and waffles, fresh seafood and small plates, as well as brined and roasted turkey with giblet gravy, pomegranate and cranberry chutney, candied sweet potatoes, pumpkin pie, apple-apricot bread pudding, cinnamon flan, and more. The affair goes for $139 per adult, and $45 for a special children's three-courser (ages six to 12).


Benny's Chop House will be rolling with a special Thanksgiving menu between noon and 9:00 p.m. on the coming holiday. For $34.99 per person, diners can opt for a holiday feast laden with turkey breasts, turkey legs, mashed potatoes, cranberry sauce, sage-bacon stuffing, honey-glazed carrots, sweet potatoes, and green beans. 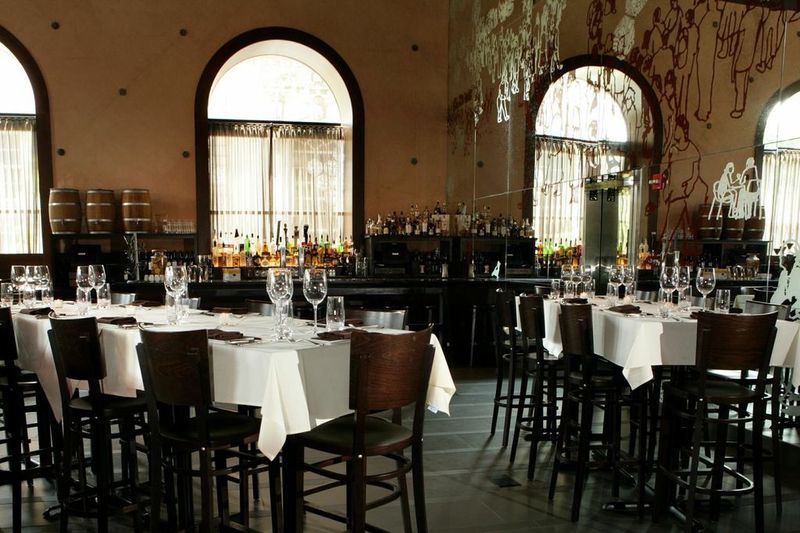 
Pumpkin soup, Cornish hen with duck stuffing, and sweet potato brûlée with shortbread cookies comprise some of the unconventional dishes to be found for Thanksgiving at Ferris & Jack. The MileNorth Hotel restaurant wows guests with its singular take on holiday supper, cooking up a three-course prix fixe for $40 per person. Open all day long on Thanksgiving, reservations can be made by calling 312-523-0911.


Each portion of the four course Thanksgiving menu at Filini Bar & Restaurant's comes with choices, allowing diners to customize their holiday meal to their desires. For instance, roasted butternut squash soup with Maine lobster salpicon vs. spinach and endive salad with dried cherries, Marcona almonds, quail egg, and foie gras-truffle vinaigrette (oh my god). Roasted organic turkeys come with chestnut and herb stuffing, while sweet potatoes take the form of flan and pumpkin cheesecake stands in for traditional pumpkin pie. To partake in this exotic Thanksgiving experience, give them a ring at 312-477-0234.


Thanksgiving flavors head to Spain via Mercat a la Planxa. When a contemporary tapas restaurant does Thanksgiving, you know it won't be your typical turkey fest. The four-course, 10-dish affair will leave guests feeling thankful for Spain's Catalan region, what with Serrano ham and fig salad, garlic shrimp, charred Brussels sprouts with candied walnuts and cranberries, and pavo, a preparation of turkey cookery that entails roasting, confiting, and frying the bird, then finishing it with sherry pan gravy and cranberry-orange compote. The holiday degustation is served in addition to the regular lunch and dinner menus, so choose carefully. The cost for the Thanksgiving smorgasbord is $65 per adult and $35 per child. Call 312-765-0533 to reserve your spot.


In case you're looking to start your holiday with some stomach-stretching exercises, get thee to Kanela Breakfast Club for Thanksgiving brunch. Both locations of the dutiful restaurant are offering pumpkin caramel waffles, spiked pumpkin lattes, and other seasonal specials to mark the occasion. Oh and bottomless mimosas are always a good idea on holidays.


Several Thanksgiving-y specials take the stage at State and Lake Chicago Tavern on November 28. Rather than commit to an entire tasting menu, diners can pick and choose which of the dishes they'd like to eat, each one offering an innovative interpretation of typical Thanksgiving food. Turkey is brined in pear cider, served with chestnut stuffing, roasted roots, bacon-mashed potatoes, Meyer lemon-cranberry jam, and buttermilk-sage gravy. Those looking for something meatier can opt for the wood-grilled shell steak with Brussels sprouts, hen of the woods grits, and bourbon glaze. And for dessert, sweet potato cheesecake with toasted cocoa nibs, marshmallow fluff, and honey-preserved pecans.


Leave it to Sixteen to exceed expectations with its dual brunch and dinner preparations this Thanksgiving. To get things started, the glamorous restaurant serves Thanksgiving brunch from 10:30 a.m. until 3:00 p.m., featuring an array of festive creations such as seared breast of poussin with caramelized pumpkin and toasted hickory nut hash; bay scallop gratin with potato puree, Parmesan, and toasted brioche; roasted turkey breast with giblet gravy and housemade cranberry compote; and garlic roasted prime rib with jus, Dijon, and horseradish cream. There's also a raw bar, made-to-order omelettes and pancakes, a children's table, and desserts. Oh and in case you forgot, dinner is also happening, starting at 6:00 p.m. Those looking to eat at home, but enjoy food far better than they could cook themselves, should consider ordering to-go from Sixteen. For $275, guests are given enough food to feed two to four people, while the $385 price tag provides enough for six to eight. Orders must be placed by November 22 and picked up on Thanksgiving between 11:00 a.m. and 1:00 p.m. Make reservations or place orders by calling 312-588-8114.