If you step outside and find your motivation killed by heat, the best thing to do is drink your feelings at one of a few shops around Chicago slinging some sweet summery quenchers. The fact that some of them are essentially desserts slurped through a straw is an apt middle finger to humidity.


Do you lie awake at night wondering why coffee and soda don't pair up to make one super drink? Your restless prayers are answered at Gingersnap Sweets & Such, the darling jewelbox of a bake shop just north of Southport Avenue. Pastry head honcho/dream-granter Jen Templeton is serving up coffee soda gelato floats this summer, satisfying an insatiable urge I didn't even know I had. As Templeton explains, the inspiration for this confection arose back in January, as she was making a dress out of Perrier cans — as we all do now and again — for the fashion show at For The Love of Chocolate. Since she had a ton of extra Perrier, she didn't want to just pour the fizzy elixir down the drain, and when a friend mentioned to her that there was a place in Michigan making coffee soda, it lit her mental lightbulb. Says Templeton, "We played around with it and I was hooked! And seriously over-caffeinated. Seriously." So then she started pillaging her home cabinets, sifting through the miscellany of wares left forgotten in the nooks and crannies of the home pantry. As soon as she stumbled upon some old-fashioned soda bottles that had never been used, the idea for coffee soda floats hit her like an apple on Isaac Newton's head. The pieces of the puzzle began falling into place, with Templeton using Intelligentsia Black Cat espresso, vanilla syrup, Perrier, and gelato from Zarlengo's Italian Ice. "Put them together and you get a decadent caffeinated treat!" Customers can go for straight-up vanilla gelato in their floats, or supplement with chocolate or caramel. 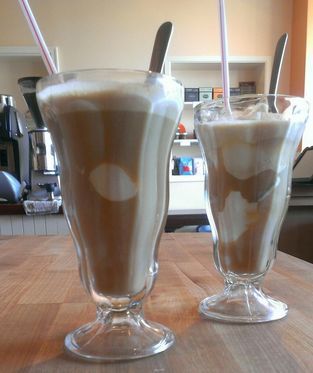 
New obsession alert! I have fallen dangerously head over heels for the drinking chocolate at Katherine Anne Confections. The stuff is like a milkshake with a rampant addiction to performance-enhancing drugs. Considering how rich and swoon-worthy Katherine Anne's hot chocolate is during the colder months (I'd feel too masochistic drinking that stuff during the summer), it's no surprise the namesake proprietor was able to put an equally decadent spin on a cool drink. The drinks are made by scooping hefty, dense dollops of flavored ganache into a blender, warming it a bit, and pureeing it with milk. The result is a silky-smooth, insanely rich alternative to milkshakes, malts, and other familiar summery fare. The shop boasts an impressive roster of flavors, from salted caramel and Mexican chocolate to my recent addiction, strawberries and cream. 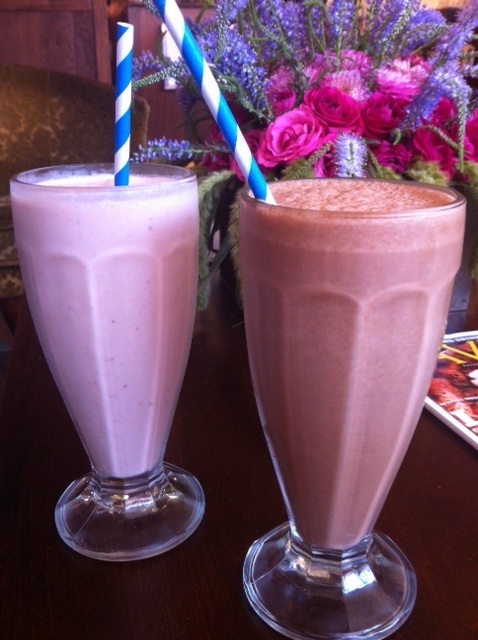 
For something a little more quenching and a little less punch-you-in-the-face decadent, swing by one of the DAVIDsTEA locations. Why? Because their new summer collection of teas make damn fine iced tea and they will soothe your soul on a sweltering day. I went on a tea bender and sampled my way through the whole collection, and I gotta say, even someone who's on the fence about iced tea (aka me) will love this stuff. The assortment skews tropical, making each sip feel like a vacation trickling down your throat. Mango Fruit Punch is like a child's juice box all grown up and sophisticated, while Pink Passionfruit has a pink lemonade quality to it. Notes of pineapple and rose fill cupfuls of the Tropicalia tea, Coconut Grove tastes like a beach getaway, and Mint Julep sings with fresh minty aromas.