Sweet of the Week: Sourdough Cinnamon Roll at Baker Miller

When I was younger and more naive, cinnamon rolls were my undoing. They were my emotional crutch. They were the lure I couldn't resist. They were the flame to my feeble moth. The blame of all this rests squarely on Cinnabon, that unrelenting temptress monopolizing mall cravings for children with weak convictions. I distinctly remember the buttery, heady aroma permeating my nostrils and drawing me in from across the corridor. It's hard to resist a dessert so gooey, treacly, and indulgent. At least that's what I thought when I didn't know any better. Now that I'm an adult who understands the effort and precision that goes into making decent cinnamon rolls, I would probably sooner use Cinnabon as a doorstop than a snack. For exemplary cinnamon roll artistry that shows how these pastries deserve to be made, I'd suggest checking out the sourdough version at Baker Miller, a homey new cafe in Lincoln Square with a serious penchant for all things grainy and doughy. 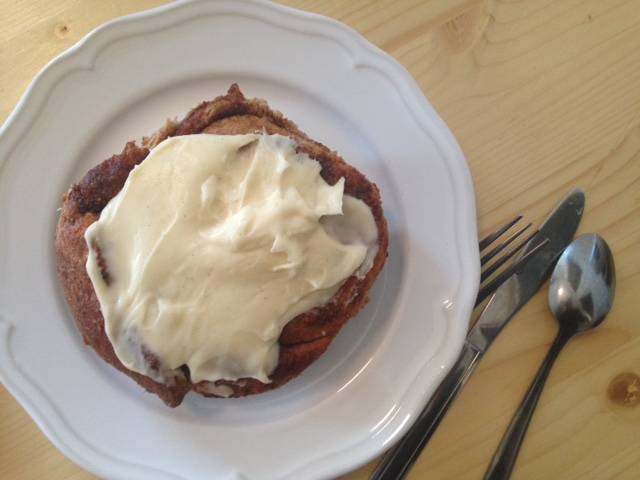 Unlike most bakeries, Baker Miller goes the extra mile of actually milling their own grains to make everything from oatmeal and grits to chocolate chip cookies, pie, and cinnamon rolls. The added effort pays off in otherwise bulky desserts like that cinnamon roll, which benefits from the refreshing, airy fluff in the dough. Unlike so many cloying cinnamon rolls, this sourdough iteration is discernibly wheaty and more fibrous, which serves to balance out quite nicely against the cream cheese frosting over top. The cinnamon-sugar amalgam is nicely balanced, the perfect juxtaposition against the savory twang of the sourdough, and an ideal compliment to the tartly sweet frosting. It's the rare cinnamon roll that does it all, and does it all well. And I've officially found my new pastry temptress.