Sweet of the Week: Pretzel Doughnuts at TWO

Apparently today is National Doughnut Day, and people are freaking out like it's deep-fried Black Friday. No doubt doughnuts have exploded over the past few years, becoming the darling dessert of bake shops and restaurants nationwide. To be honest, I'm reaching doughnut fatigue, so it takes a special doughnut to earn my drool. I am here to say that special doughnuts can be found at TWO. The menu changes frequently, but a current dessert is pretzel doughnuts filled with chocolate and served with a cup of drinking chocolate. Do it.


The genius thing about TWO's doughnuts is that they combine two doughy delicacies in one: pretzels and doughnuts. It's the Brangelina of desserts, and damn is it sexy. The doughnuts come heaped on a plate looking like amorphous fritters. Their texture is denser and chewier than typical doughnuts, but not in the way that Munchkins are stale when you eat them the next day (or is that just me?). They're chewy and soft in a pretzel-y way, and also a little less sweet than standard sugar bombs. Of course, they rectify this by filling the doughnuts with a bit of molten chocolate, rolling the doughnuts in cinnamon-sugar, and serving them with a cup of viscous drinking chocolate. It seems to be more of a wintry combination, but it's pretty irresistable nonetheless, and the perfect dessert for National Doughnut Day. 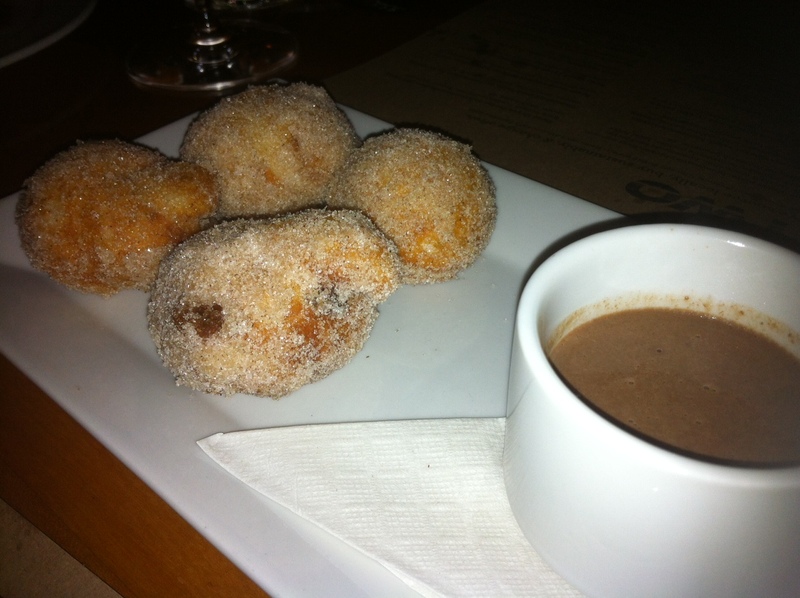