Sweet of the Week: Ice Cream Sandwiches at Umami Burger

One huge bit of news that comes with the Umami Burger opening that people aren't really talking about is the debut of Coolhaus ice cream sandwiches in Chicago. These feverishly popular desserts originated as a chilly food truck in L.A. and has since spawned offshoots in New York, Austin, and Dallas. With cool, offbeat ice cream flavors and unusual cookie sandwich combos, they truly are unlike any ice cream sandwich on the market. So when it came time to eat some sweets after a beef-heavy meal at Chicago's first Umami Burger, imagine my fanboy freakout upon learning Coolhaus ice cream sandwiches were on deck. As someone with an insatiable sweet tooth, and a particular penchant for ice cream, these things almost usurped the burgers to steal the entire show. 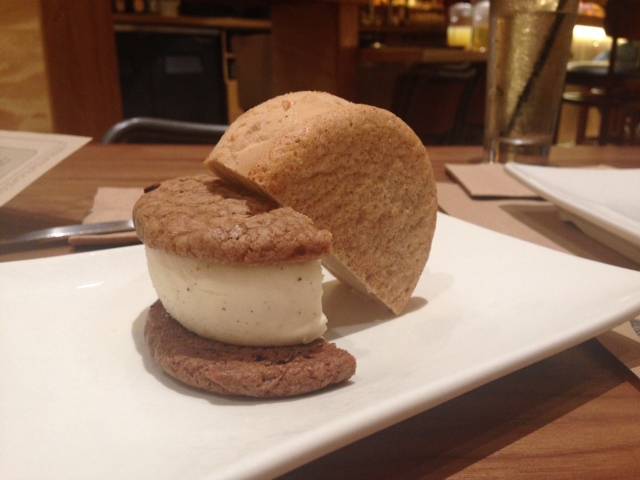 
Coolhaus ice cream sandwiches look fairly simple and classic, but flavors and textures serve to heighten these things well beyond the norm. After gorging on burgers, we were met with a plate of cute ice cream 'wiches, each one split in half and arranged adorably as if they were hugging one another. One was a version of the classic chocolate chip cookie with vanilla bean ice cream, albeit eons better than the standard, thanks to chewy-sweet cookies erupting with gooey morsels of chocolate, and silky-smooth ice cream, just warm enough not to stab your tongue with chills. It all melts together in one buttery, brown sugary bite. Then there's the spicier, richer combo of snickerdoodle cookie with Nutella ice cream. The snickerdoodle is radiant with enough cinnamon and sugar to merit its own Yankee candle aroma. The ice cream is as intense and indulgent as one would expect of cream-infused Nutella, holding together like a mound of cooled fuge. The spices in the cookie stand to cut through all that heaviness though, resulting in a cohesive sandwich of sweets and spices.