I'm pretty sure I never screamed as loudly as a kid as I did upon hearing the news that Jeni's Splendid Ice Creams was opening up shop in Chicago. The arrival of the Ohio-based ice cream juggernaut is the arrival of ice cream Jesus, and any way you scoop it it's ice cream worth screaming for. Since opening the first store in Columbus, Ohio, the Jeni's empire has expanded with several additional Ohio stores, as well as two in Nashville, this one in Chicago, and a forthcoming shop in Atlanta. The popularity is for good reason; Jeni's churns some seriously delectable ice creams, eschewing cookie-cutter flavors such as cookie dough, Oreo, and bubblegum for more unusual creations. Sure they have a few renditions of chocolate, but they're made with artisanal chocolates and unexpected spices. Seasonal fruits are made into jams and blended with crunchy morsels of streusel. Even biscuits are crumbled up and strewn into ice cream. This is a charmingly Willy Wonka-esque approach to ice cream-making, if Willy Wonka had a serious culinary pedigree.


Jeni's has been open less than a week and I've been twice. Oops. I don't even live remotely close to the shop, which doesn't say a lot about my self control. I've tried a couple scoop combos, including peach jam with biscuit ice cream compounded with pistachio-honey. But my favorite is the brambleberry crisp and Askinosie milk chocolate. Can't say I've ever had brambleberry before. It sounds like a Dr. Seuss fruit. But I'd liken it to a blueberry-cranberry type flavor profile, which when made into jam and swirled with crispy oat streusel makes for a rich breakfast-y ice cream. It pairs beautifully with something on the polar opposite end of the spectrum, a chocolate milk-esque concoction made with Askinosie chocolate. Teeny bits of cocoa nibs provide pops of crunch, as the fudgy ice cream dissolves on the tongue like a handful of M&M's. Of course, this is just the tip of the ice(cream)berg at Jeni's. Wiht so many feasible flavor combos, plus housemade waffle cones and macaron ice cream sandwiches, there's an infinite supply of sweet treats to be had. 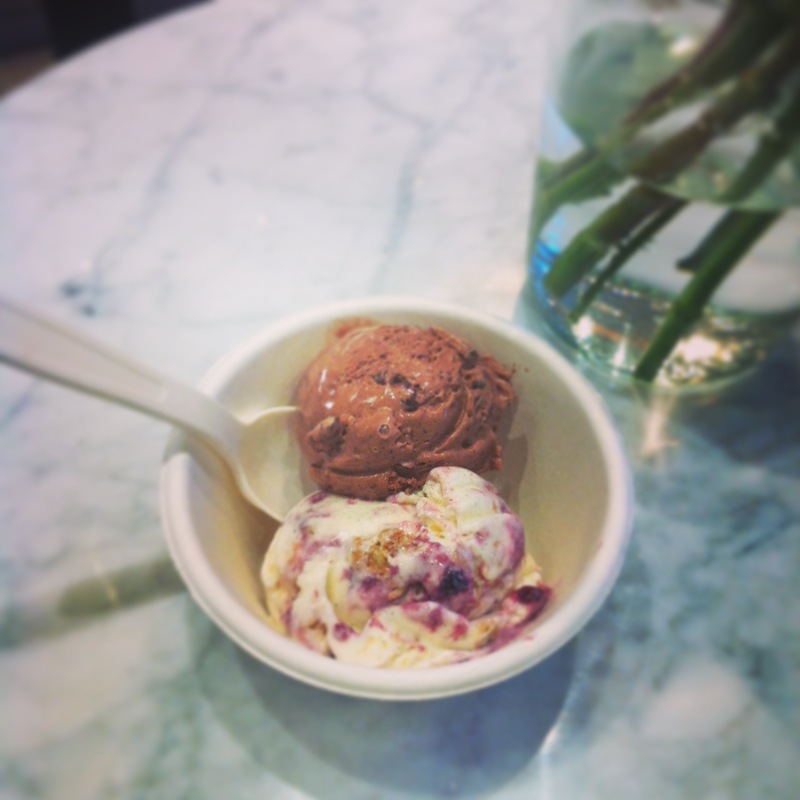 (Brambleberry crisp and Askinosia milk chocolate, together at last)