Sweet of the Week: Cannoli at Filini

In the pantheon of classic "ethnic" desserts, cannoli reigns supreme as far as I'm concerned. I defy anyone to decry the combination of sweet ricotta, crispy fried pastry shell, and pistachios as anything less than perfect. Heck, even a lackluster, poorly made cannoli is delicious. You know the ones, with pre-bought shells dotted with neon-green peanut bits masquerading as pistachios. As if we're so easily fooled that anything green must be a pistachio. But whatever, it's delicious. So when a cannoli is indeed exceptionally well made, it makes for a memorable experience. My previous favorite in Chicago was at the bygone Pasticceria Natalina in Andersonville. It's taken a while for my broken heart to mend after their closing, but I believe I've found a new cannoli to admire, and it's on the dessert menu at Filini. 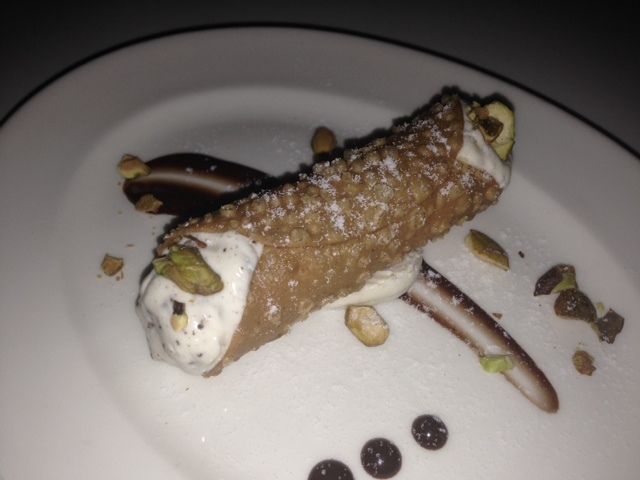 
Filini's cannoli is the ultimate capper to a meal of elegant, quasi-modern Italian fare. The menu states that it's "almost 100% Italian," a clever note to state that the restaurant takes creative liberties in order to jazz up Italian classics. Their cannoli is pretty close to classic, albeit perfect and stunning in a way I have never seen. This is the most grandiose cannoli I've ever witnessed, encased in a delicate, cracker-thin pastry shell. Sprinkled with just a dusting of sugar, the shell itself is very well executed and flavorful, laying the groundwork for silky-sweet ricotta filling infused with lemony essence. There's a gentle chocolate swirl on the plate to enrich it further, along with a generous smattering of crumbled pistachios. The real kind. In addition to being so flavorful, I appreciate this cannoli for not utterly shattering apart upon one bite. The shell has enough integrity to hold up to the innards and remain sturdy during the duration of your dessert.