Sweet of the Week: Brownie Sundae at Floriole Cafe & Bakery

Is there such a thing as brownie rehab? Because I think I need that. As I've stated before, I have long had a love affair with brownies, starting off as a childhood lunchbox snack and evolving into a somewhat crippling addiction as an adult. It's tough to pinpoint my favorite brownies nowadays (Sophie, I have a newfound empathy with that choice of yours, girl), but if someone were to hold a bazooka to my head and demand I reveal my favorite brownie, I would tell them to go to Floriole Cafe & Bakery.


The brownies at Floriole are sublime in their simplicity. Made with Valrhona chocolate, pastry chef/owner Sandra Holl keeps her brownies straightforward, so as to showcase chocolate in its finest form. I love her brownies as is, gobbled greedily as soon as I leave the bakery. But Holl managed to take it up a notch at her most recent pizza dinner. The cafe recently instated pizza nights every Friday and Saturday, wherein two pizzas are served, along with appetizers and desserts. Last week, I had the pleasure of punctuating my meal with a brownie sundae. This is elevated TGI Fridays food at its finest, featuring morsels of brownies strewn about in a bowl with chocolate sauce, ginger ice cream, and whipped cream so silky and smooth, I wish I could make a Snuggie out of it. Chocolate and ginger are two flavors I don't often find flirting with one another, but the combo works fantastically, with the zesty spice of the ginger juxtaposed nicely alongside the rich chocolate. 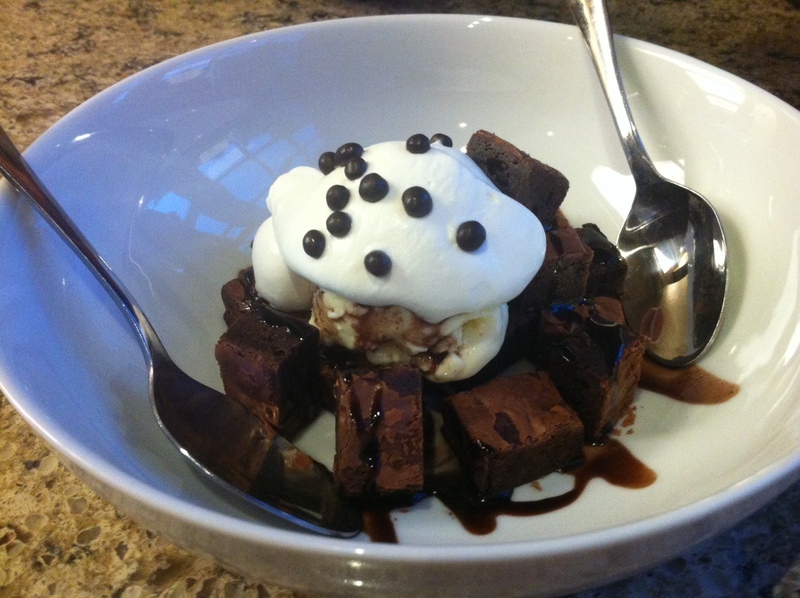