'Tis the season to start screaming for ice cream! And ice cream-adjacent products such as gelato. Especially when said gelato comes from Black Dog Gelato and one of the flavors du jour is their masterful butterscotch bourbon pecan. The adorable gelato shop always has an enticing roster of seasonal and whimsical flavors stocked in its case, but keep an eye out for this boozy nosh, a sublime medley of everything I want in a scoop. 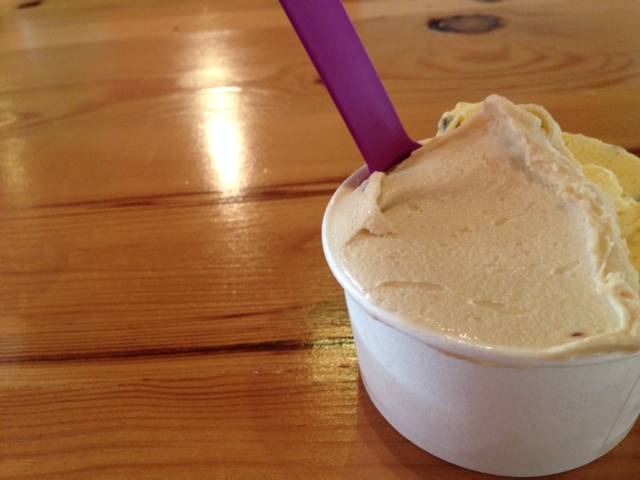 
I love everything about Black Dog Gelato; the motif, the cute clientele, the flavors, the colors, the everything. I usually take a hiatus from indulging when it's colder out, because obviously. But once the weather turns, it's ON. And I visit with reckless abandon. I'll usually opt for two flavors in a large cup, like the malted vanilla + chocolate raspberry brownie or the salted peanut + Concord grape sorbet. But when butterscotch bourbon pecan is in the case, it deserves to stand alone. An upscale riff on the standard butter pecan ice cream, this stuff is a divine upgrade. Toothsome morsels of pecans provide a nice crunch against the velvety soft gelato, which is infused with enough palpable bourbon to fill out an Old Fashioned. The booze is evenly juxtaposed with the caramel-y sweetness of the butterscotch. All together, the flavors meld into a savorous threesome, making for an icy confection worth screaming for.