Summer of The Amazing Kale Burger

And my secret obsession is the vegan burger from Leona's (who am I?)

Kale burgers developed a surprising cult following after a run at Flipside Cafe over the winter, and now creator Brandon Byxbe has brought them to Logan Square Farmers' Market, and customers can't get enough. Learn the story behind The Amazing Kale Burger.Chicago loves its burgers. A quick ride past Kuma's Corner on any given day at any given time will confirm that. But when it comes to burger ingredients, we don't discriminate against non-beef patties. Personally, I love a good turkey burger now and again. I've even had reputable shrimp burgers and salmon burgers. And my secret obsession is the vegan burger from Leona's (who am I?). The latest burger craze took a surprising shape in the form of a kale burger. Ever since making their lauded debut at Flipside Cafe last year, they've reached cronut status at the Logan Square Farmers' Market, attracting hordes of hungry kale-lovers hankering for a taste of vegan, gluten-free goodness. 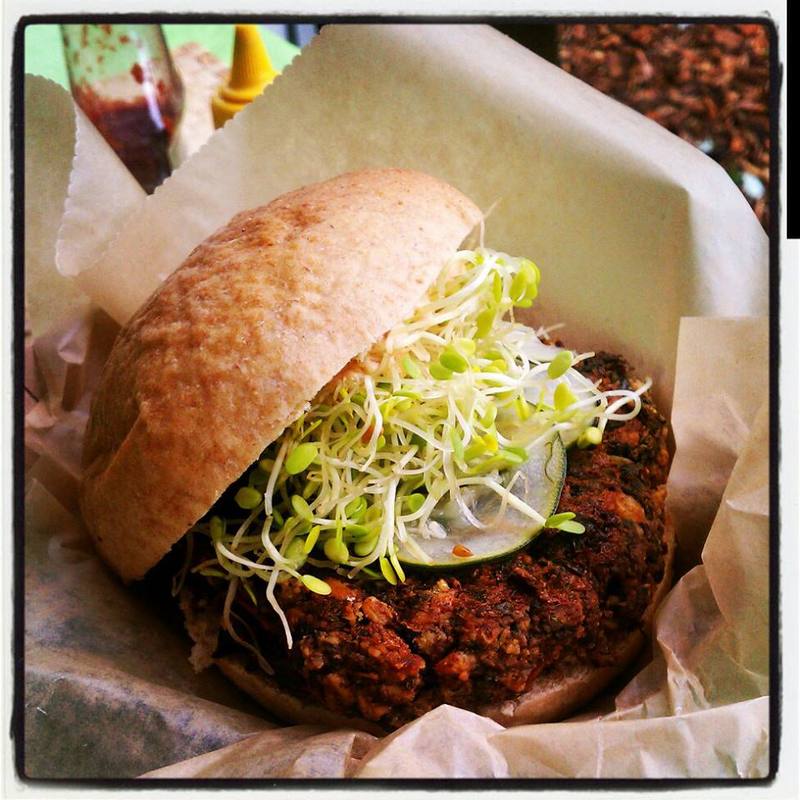 
The creator of the aptly named Amazing Kale Burger is Brandon Byxbe, a vegan gentleman who fell into the food world purely by happenstance when he got a job as a line cook at a vegan restaurant in Denver. He developed a passion for baking, and began scouting sweeter opportunities. He ended up getting a job at The Chicago Diner, accepting a baking position via email and moving to Chicago on a whim. Within six months, he was running their bakery and stayed on for two years. He also spent time as the head chef at Earwax Cafe towards the end of their run, before working with Linda Szarkowski at Green Spirit, a raw, vegan food company. Byxbe met Will Von Hartz, proprietor of Flipside Cafe, the cozy cafe that pops up in the Miko's Italian Ice space during the colder months, at the Logan Square Farmers' Market, and joined the cafe last season as their baker.


The Amazing Kale burger was born at Byxbe's home, as a way for him to eat more vegetables in a quick manner. Kale is one of Byxbe's favorites, so it was natural for him to try to prepare it as a vegan burger. He wound up adding it to the menu at Flipside Cafe out of personal necessity, so that he could have something to eat. They made the leap to the Logan Square Farmers' Market this year after achieving cult status acclaim at Flipside Cafe, and after Byxbe and Szarkowski collaborated on kale provisions to provide at the market. While Szarkowski slings kale chips, fermented cashew cheese, and sweet potato chips at the Green Spirit booth, Byxbe serves his burgers under The Amazing Kale Burger moniker. The burgers incorporate Radical Root Farm kale, River Valley Ranch mushrooms, garbanzo flour, and gluten-free oats, topped with Byxbe-made pickles and chipotle sauce. They're served either as a lettuce wrap or on homemade burger buns. "They're going over like crazy," says Byxbe. "We're selling double what we expected. This summer looks to be outstanding." You hear that, Chicago? It's the summer of The Amazing Kale Burger.