Our Hearts Bleed for the Garcias

I'm not gonna lie, the first time I met Vinny Garcia I was more than a little intimidated. The man had a domineering presence, coupled with all the things I had seen and heard on TV and in the media about him during his tenure at the bygone Bleeding Heart Bakery empire. He and his wife Michelle Garcia developed a polarizing renown in Chicago; a love 'em or hate 'em couple responsible for badassery and baked goods. But behind the glossy, marzipan-emblazoned exterior, Vinny and Michelle have always been as sweet as their pastries. Sadly, Vinny passed away early December 2, after several days in the hospital due to Leukemia. It has been an honor and a pleasure to get to know the Garcias over the years and marvel at their journey. As we bid Vinny adieu, here's a look back at the indelible mark they've left on Chicago. 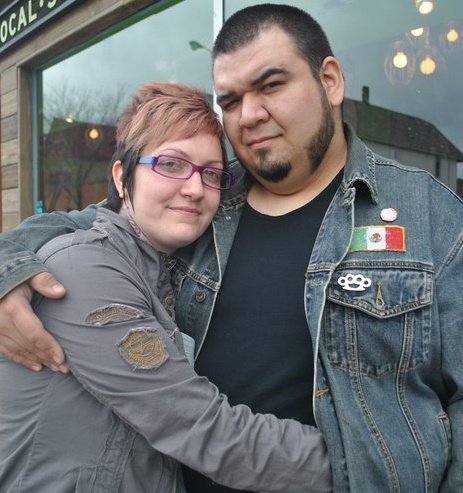 Bleeding Heart Bakery emerged about a decade ago, offering a very unique brand of punk rock-esque pastries and elegant, elaborate confections with fun accoutrements and techniques that served to stick a middle finger in the face of societal dessert norms. The bakery famously bounced around at various locations, opening and closing spinoff outlets at a wild rate. There was Bleeding Heart Bakery in West Town on Chicago, then Bleeding Heart on Belmont in Roscoe Village, then The Painted Lady back in West Town, then another Bleeding Heart on Lincoln in Lakeview, followed by Chaos Theory Cakes in the same space, then a return to West Town with an elaborate diner/bakery concept, then a relocation of the Roscoe Village spot further down Belmont to a smaller space, not to mention outlets in Elmhurst and Oak Park. Got all that? The road was never easy or straightforward for the Garcias, but they kept going strong no matter what. Drama seemed to follow them wherever they turned, with ex-employees lambasting the couple online and commenters criticizing them for poor management skills and so forth. Like a Hollywood couple in the paparazzi glare, the Garcias did the best they could, avoiding drama whenever possible but sometimes succumbing to it because hey they're human. Like I said, never easy.


If Bleeding Heart had such a tumultuous history, why did it continue to thrive for nine years? Why were people consistently willing to make the trek and pay for pastries infused with drama? Because for the folks who could see through the hazy, angst-laden drama fog, there were exceptional pastries to be had at Bleeding Heart. The Garcias were a one-two punch unlike any other, with Vinny responsible for masterful, awe-inspiring cakes and Michelle taking the reigns on a miscellany of vibrant pastries, from cake balls (the trend started here) and Top Chef-inspired cupcakes to doughnuts (again, ahead of the trend), whoopie pies the size of tires, bacon-infused cookies, gooey brownies, and lots more. Say what you want about the drama that plagued them, but the couple knew how to bake, earning numerous TV spots and plenty of accolades from food press and pastry diehards.


When Bleeding Heart finally closed last year, the Garcias left Chicago for San Francisco. It seemed as if some of the most influential and buzzed about pastry chefs were gone for good. But their stint was short, due in part to San Francisco's high living expenses. Michelle spent time doing work at the Four Seasons, while Vinny made cakes from home. But after a while, it was time to conceptualize their dream and bring it home to Chicago. Their next venture was slated to be Lucha Dulce, a Mexican bakery in line with Vinny's heritage and slated for Pilsen. Unfortunately, that idea has been shelved in light of Vinny's death.


As Michelle and her kids try to move on and support themselves, they have set up a Go Fund Me page with more background on the Garcias and the story of Vinny's ailments.