Masa: Not Just for Tamales Anymore

Once upon a time, masa was used almost exclusively in Mexican cuisine. Made by soaking dried hominy in lime solution and grinding it into a paste, masa is commonly used to make tamales, tortillas, pupusas, and champurrado, Mexican hot chocolate thickened with masa (Swiss Miss, eat your heart out). Lately though, masa has been experiencing a bit of a renaissance. Beyond your standard taqueria fare, masa is being put to use in a variety of restaurants around Chicago, in everything from brunch to dessert.


Lula Cafe is a surprising hub for masa. The kitchen sources masa from Popocatepetl, a tortilleria in Pilsen, and uses it for savory and sweet applications. Last summer they made masa gougeres and ran a sweet corn and miso tamale as a dinner special, topped with fried masa leavened with baking powder and piped and fried in graffiti-like shapes. As sous chef Mike Simmons explains, they use masa a lot for brunch now. "I grew up in west Texas, so the stuff is such a comfort food for me," he says, calling it a delicious and satisfying ingredient in the a.m. hours. Recently, they ran a masa crêpe stuffed with Chihuahua cheese and chiles, but Simmons recently swapped it out for a masa huarache, an oblong masa shell brimming with duck confit, black mole, lima beans, pasilla chiles, hard-boiled egg, and pickled jalapeño crema. It's sort of like a gourmet taco salad.


That's not the extent of the masa wares at Lula, as it recently made its way onto the dessert menu as well. Pastry chef Kate Neumann admits she is no masa expert, but feels it is a fun addition to her favorite chocolate pot de creme recipe. "I am amazed by how much it thickens when used in conjunction with chocolate," she says. "The flavor becomes somehow familiar and foreign." Inspired by champurrado, which is traditionally served with churros, Neumann prepares her own churros and shellacs them with cinnamon-sugar. The masa-based custard is rich and dense like an enhanced pudding, topped with spiced caramel cream and smoked sea salt. 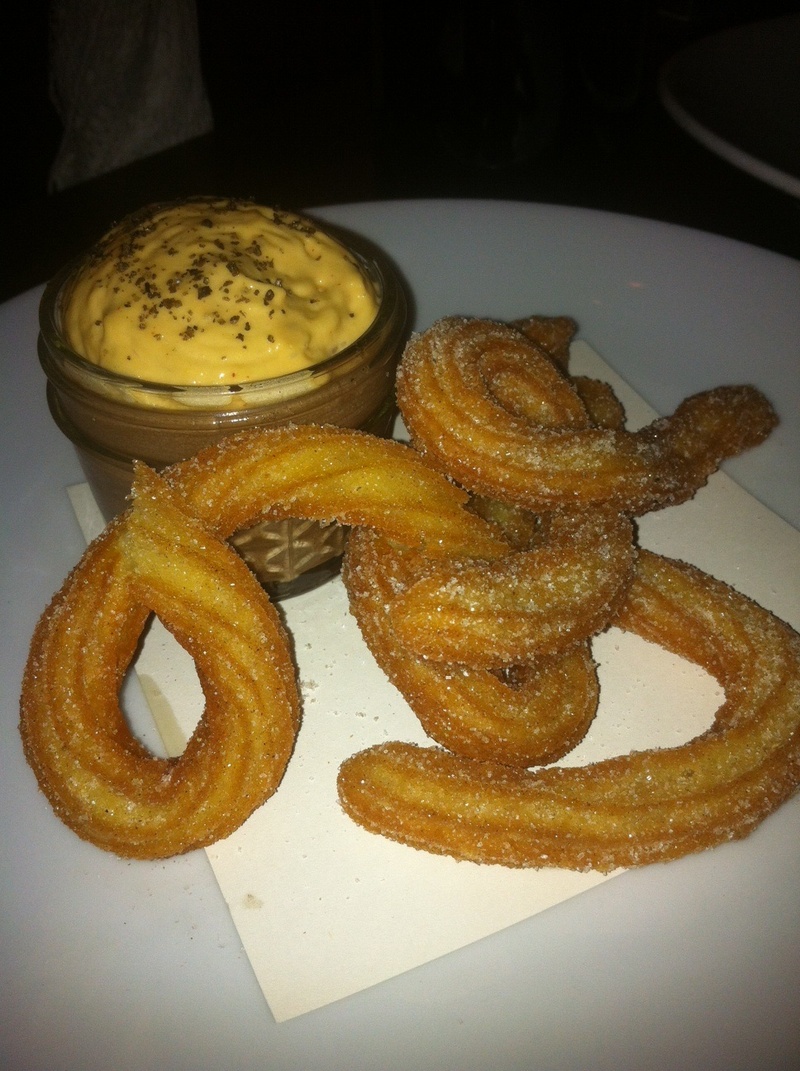 
Lula Cafe isn't the only place getting crafty with masa. At High Noon Saloon, masa plays an important role in the huevos Benedictos at brunch. In lieu of English muffins, the modern saloon uses sopes, pillowy masa patties made by mixing masa with vegetable oil, salt, flour, and baking powder. The sopes are served with asparagus, spinach, poblano cream sauce, roasted potatoes, black beans, and Mexican chorizo. Oh and eggs of course. A plateful of this and you'll be ready to go wrangle a bull.


Masa can be found flecked throughout the whopping menu at Little Goat. Stephanie Izard adds some authenticity to her Spanish omelette by sprinkling it with masa chips, pimps out a taco salad with masa shrapnel, heaps nachos with BBQ pork, and even incorporates masa into dessert via the Choco Taco sundae, a decadent icy beast studded with masa crisps and goat's milk caramel.


Trenchermen brothers Mike and Pat Sheerin are a couple of culinary Willy Wonkas. Of course they would have a gourmet version of Doritos, and of course it would be made with masa. Of course. The adorably named Trencheritos are black pepper masa chips made by combining lard, black pepper, squid ink, and fresh masa. This makes a pliable dough that is cooked, dried, and fried into crispy shards, served with smoked chicken dip, fresh English peas, and Werp Farm radishes. Trencheritos are available on the bar menu.


Nacional 27 recently changed the dough used for their empanadas to masa. The sexy barstaraunt uses the dehydrated version, reconstituted with water and a bit of flour. Why masa? Because it stays crispier than other empanada doughs, and it won't get soggy against the fillings, which include pepper Jack-cream cheese, chicken with roasted vegetables, and plantain-boniato with potatoes and queso.


At Province, not only is masa used for tortillas, but also for masa flatbreads. This huarache-like creation is weighted down on an oiled flat-top to get it nice and crispy. It's then topped with slow-cooked leeks, roasted cremini mushrooms, Manchego cheese, and smoked pepper sauce. The whole thing is fired in the oven and finished with some chopped mesclun greens and a balsamic-mustard-soy drizzle. It's like a pizza by way of Latin America by way of Chicago.