For folks who don't follow college basketball with the ferocious vigor that many sports junkies seem to do, the words "March Madness" are nary more than seasonal jibberish. Unless of course the "madness" applies to food and booze, in which case hooray! That's some madness we can all get on board with. With the annual hoops hoopla underway this week, here's a handy guide to the best restaurants and bars in Chicago to watch March Madness. Or just to pig out while ignoring the television screens. 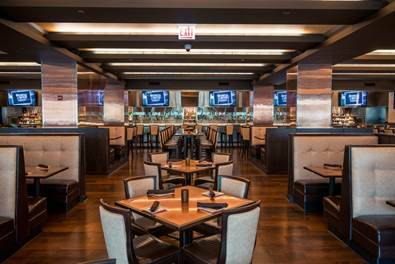 No doubt Division Street in Wicker Park is ground zero for sports-watching frivolity. At the nexus of the mania is The Boundary, a colossal sports bar with a penchant for packing in patrons and stuffing their faces with potato skins, buffalo shrimp quesadillas, and chicken wings with mango-barbecue sauce. The boisterous, sprawling space makes for an ideal setting to bring your most bromantic pals and perch yourselves in front of a flat-screen for a hot minute. Large group reservations are available Thursdays and Fridays during the day and appetizers are 50% off on Thursdays before 5:00 p.m.

Nothing pairs with basketball quite like barbecue. Not only do they just sound harmonious together, but they make for a dynamite dining, drinking, and entertainment experience at Chicago q. The Gold Coast barbecue haunt offers everything you could ever want in a March Madness meal, from pulled pork sandwiches and brûléed mac & cheese to ribs, pig powder chips, and brisket baked beans. The bar area is the perfect spot to pop a squat, outfitted with televisions and comfort food aplenty. Private dining and catering packages are available, adding to the allure, and guests looking to really indulge can order Chicago q's whole pork shoulder presentation, which feeds about a dozen hungry customers.

Not only is Bull & Bear a fun, slick River North bar in which to view the Madness and feast on contemporary American bar food, but a month-long spree of trivia only adds incentive. Every Tuesday through the end of March, the bar has been hosting trivia competitions, with the grand prize being a trip to the Final Four and $500 cash. Top teams from each round compete in the Bracket Bust on March 25.

Sports and beer go together like Thelma and Louise, minus the fatal car plunge. The perpetual friendship between beer and sports come to a glorious head at Howells & Hood, home to Chicago's largest array of beer taps and a head-spinning collection of televisions so large you'll feel like you're actually on the court. Menu specials for March Madness hysteria only add fuel to the delicious fire, including pastrami sandwiches seasoned with coffee, coriander, and black pepper; smoked beef rip tips with blood orange mojo; and fried green beans with black garlic chile paste and Jonah crab mayo.

Whiskey, beer, barbecue, and chicken wings. What more could you ask for? Unless you're wildly selfish, nothing. Porkchop has all your March Madness-viewing needs covered, including specials on beer buckets, Jim Beam cocktails, and chicken wings during the festivities. The West Loop bar/restaurant also boasts an impressive array of barbecue, whiskey, draft beers, and heartwarming winter cocktails, which taste just as delicious in early spring.