When one thinks of Italian food, one envisions comfort, hospitality, and rich, soulful dishes prepared by family members or saucy chefs. More so than many cuisines, Italian food is associated with hearty family fare, served in heaping portions often by sassy grandmothers. Since not all of us have a sassy Italian grandmother, Ceres' Table does the leg work for us and brings a piece of their own Italian grandmother traditions to Chicago. Inspired by chef Giuseppe Scurato's visits with his grandmother la Nonna in Palermo, cucuzza is a new dish that tugs on heartstrings and warms the soul.


Every time Scurato and his wife, Ceres' Table co-owner Carolyn Gordon, visit la Nonna in Palermo, she creates elaborate lunches for them, rarely replicating the same dish and often featuring some sort of pasta. They're always seasonal and fresh as can be, and one of the couple's favorite items is la Nonna's cucuzza, long squashes grown on trellises that are rarely seen in the states. La Nonna prepares the cucuzza with tomatoes and garlic, simmering it all with the cucuzza blossoms and leaves as well, then serving it over pasta.


But what's a hungry restaurant couple supposed to do if they crave cucuzza in Chicago? Take it into their own hands, of course. Since they were unable to find cucuzzas here, they ordered seeds and grew them themselves in their plots at Peterson Garden Project. This year they had some specially grown for the restaurant at Seedling Orchard. Scurato has been preparing it true to la Nonna's tradition, and cucuzza is currently available as a side dish at Ceres' Table. La Nonna would be proud. 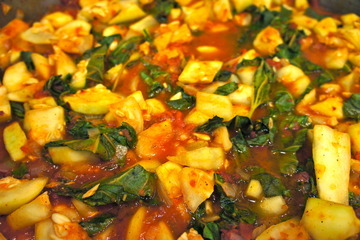