Gluten-free is much more than a buzzword at Big Jones, where executive chef/owner Paul Fehribach has gradually altered his brunch menu so that all griddled items are sans gluten. The reasoning was not to cash in on Chicago restaurants rising gluten-free market, but to create some consistent recipes that aligned with historical Southern food traditions. And as a bonus, they happen to be gluten-free. Win-win situation. Now brunchers at Big Jones can partake in gluten-free pancakes, French toast, and corn cakes, items typically taboo for those with gluten allergies.


It all started with pancakes. Big Jones switched their pancakes a few weeks ago to 100% certified organic, whole heritage grain flours, and by the luck of the flour gods they happened to be gluten-free! Whodathunk. The current iteration is blueberry pancakes made with peelcorn oat flour. Fehribach decided to keep the momentum going, exploring more historical recipes to experiment further with gluten-free cookery. His next target was the French toast, which has long been made with milled wheat Sally Lunn bread and therefore not gluten-free. He found a recipe for hominy bread in The Receipts of Harriot Pinckney Horry, something he wanted to try out due to hominy's affinity for late summer stone fruits and grapes. He found that cooked hominy lent a pleasantly spongy texture to the bread, making for sublime French toast, especially when adorned with roasted Italian plums, summer savory, whipped crème fraîche, and granola.


The French toast joins the pancakes and corn cakes on the gluten-free griddle as the latest brunch item. As Fehribach explains, the overall intent is not to cash in on the gluten-free spotlight, but to highlight ancient heirloom grains, which dovetail with Big Jones' culinary philosophies. 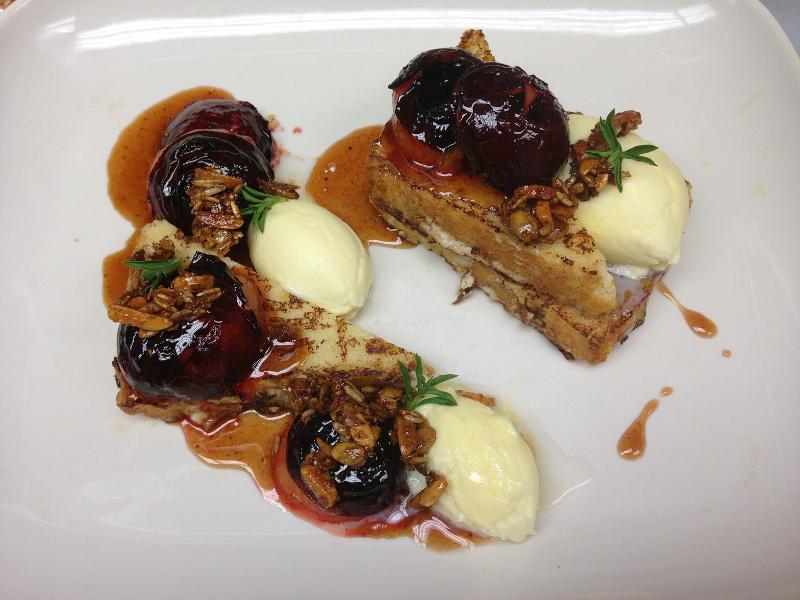