Several underground restaurant concepts have popped up throughout Chicago, but none quite so collaborative, engaging, and evolving as Ampersand. Located in the back of Kinmont, Ampersand is a clandestine event space designed to host collaborative pop-up dinners and support Chicago's thriving culinary scene in innovative new ways. Right out of the gate, the new space is proving its mettle as an underground force worth discovering. Check out some of the ambitious, exciting lineup planned for Ampersand this season: 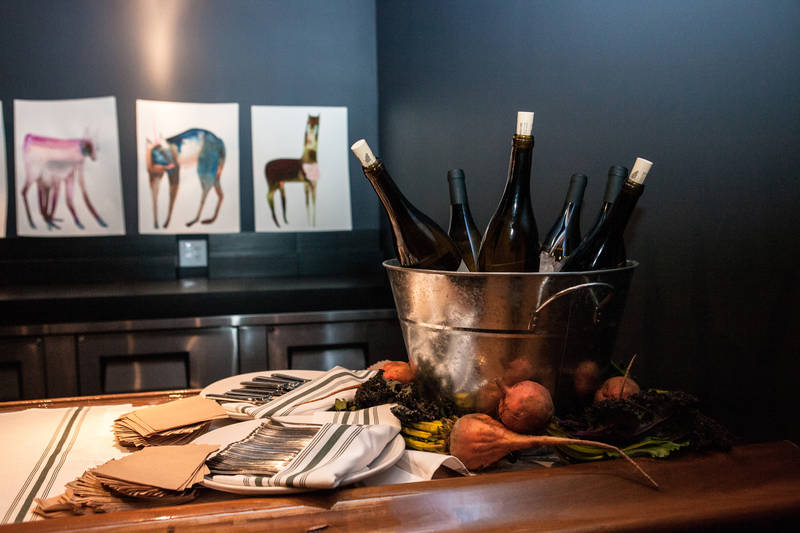 
First up is Yo Soy Underground Supper Club. This art-minded dining experience is the handiwork of partners Mikey Corona and Brian Riggenbach, who share a love for dining and artful aesthetics. By hosting events at museums, galleries, private homes, and any imaginative space in between, Yo Soy is able to foster a comprehensive sense of artistic lifestyles in invigorating new ways. As Yo Soy makes its way to Ampersand on April 12 and April 13, the dinner club focuses on "Adelante," a dining experience themed around April Fools-like frivolity. Expect soups both spicy and cooling, chiles that skew sweet, and other tasty surprises throughout. Tickets cost $60 and can be purchased here.


On April 22, Rabbit Hole Magazine takes the stage at Ampersand. The national e-magazine is launching a new dinner series touting the talents of Chicago chefs, mixologists, and other local artisans. The name of the series is, aptly, "Down the Rabbit Hole," and the inaugural event hones in on fresh, floral, springy sensations. Nick Bajal and David Fingerman from Atwood are up first, preparing a five-course feast utilizing the best of the Midwest in spring provisions. Letherbee Distillers' Ian Van Veen serves as the master of spirits, pouring an array of seasonal cocktails to accompany. Field & Florist will bedeck the space like a lush garden, outfitted with floral creations and seasonally minded accoutrements. The cost is $85 per person and tickets are available soon on Ampersand's website.


Yo Soy returns on May 3 and 4 for their next go-round, this one titled "Frexican." As you might guess, this one has something to do with Mexico. And France. Particularly, the Mexican holiday known as Cinco de Mayo. For this five-course affair, Yo Soy utilizes both French and Mexican flavors, seeing as Mexico pried itself away from France rule during the Battle of Puebla. Here, the two cultures kiss and make up in a degustation of seamless synergy. Tickets for this dinner go for $60 and can be purchased here.


Two local culinary titans converge for one powerhouse event on May 12, as Abraham Conlon of Fat Rice and Nicole Pederson and Amy Morton of Found team up for what is sure to be the one-two punch of the culinary season. Both restaurants bring highly unique approaches to cooking, as Fat Rice is known for its Macanese cookery and Found its social conscious approach to locally inspired cuisine. Together, they join forces for a good cause, tag-teaming a dinner designed to raise funds for Fat Rice's Jan Henrichsen, who was diagnosed with cancer. Ticket details are still to come.


Lastly, a Barrelhouse Flat alum branches out on his own with an artisanal bitters company called Weatherby's Bitters, and he's showcasing it on June 3. Greg Buttera is the cocktail maven behind the bitters, the first Chicago-based company to bottle and sell its own bitters, and he's celebrating with an inaugural event at Ampersand. At this late spring soiree, guests will have the opportunity to get a peek at Buttera's efforts. Ticket info to come.


For the rest of Ampersand's imminent dining schedule, including a bakery preview from HotChocolate's Mindy Segal, a cookie-making class from One Part Plant's Jessica Murnane, and a ramen birthday bash for Cicchetti's Mike Sheerin, visit here. You know you want to.