If anyone questioned the longevity of Chicago's appetite for doughnuts, the opening of Los Angeles import Stan's Donuts and Coffee comes as the latest testament to our insatiable craving for fried dough. Not only are we willing to queue up for Chicago originals like Doughnut Vault and Glazed & Infused, but we're just as ravenous for out-of-towners like Stan's, a longstanding institution in L.A. that is often accredited as the progenitor of the nationwide doughnut boom. And rightfully so, considering the quality of these doughnuts and the arrangement of offbeat flavors. 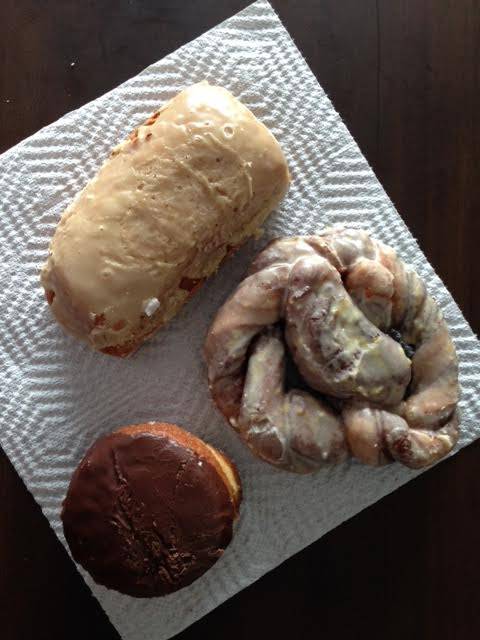 For more than half a century, Stan's Donuts has been a deep-fried destination in Los Angeles. In bringing the legacy to Chicago, the doughnut company partnered with Rich Labriola of local Labriola Baking Company, joining two dough titans into one. After seeing Stan Berman on television, Labriola reached out to see if he'd be interested in a partnership. He was. And while there are no plans for expansions in Los Angeles, the Chicago opening and partnership with Labriola comes with new opportunities to expand the brand in Chicago.

Stan's sports lots of different doughnut varieties, likely the widest assortment of flavors in Chicago. And unlike some other spots in town, Stan's doesn't close when they run out, instead opting to stay open all day and evening, providing a steady stream of dough morning, noon, and night. All the requisite classics are in place, from old fashioned cake doughnuts to glazed doughnuts and fritters, but it's the offbeat flavors that really stand out. A nice little Labriola "twist" is in the assortment of pretzel-y doughnuts, a nod to Labriola's famed pretzel breads. Stan's features fried pretzel twists in a number of options, including orange-glazed and cinnamon. My favorite doughnuts were the maple long John, the Boston cream, and the Biscoff cream. Unlike many maple-frosted doughnuts, Stan's does a good job of actually making it taste like legit maple, with the amber hue of maple sugar. The exemplary Boston cream is absolutely bursting at the seams with custard filling, sheathed with a fudgy chocolate coating. Then there's the Biscoff cream, a Boston cream-like preparation, but instead of custard it's a European spiced cookie spread similar to Nutella. You can opt for Biscoff doughnuts with or without banana, and I'd highly suggest with.

You can't have doughnuts without coffee, especially considering the texture and density of these doughnuts are just perfect for immersing in hot java. Stan's sources its coffee from Intelligentsia. Stan's has its own house blend, a dark roast, and decaf, along with coffee bar creations such as lattes, macchiatto, espresso, and chai.

A little taste of L.A. at the nexus of Wicker Park and Bucktown, Stan's is sunny, bright, and spacious, offering something truly unique in Chicago's pantheon of cramped doughnut haunts. Guests enter through the south door, greeted directly by a wall of alluring doughnuts and an amiable staff. Mosey through the line, gawk at the doughnuts behind the glass, and place your order. Stan's has several seats for enjoying your doughnuts on-premises, or you can exit through the door on the north side of the space.