A lot of people have been buzzing lately about the forthcoming Batman vs. Superman movie, which has been filming around town in Chicago, amassing fanfare. But let's be real. The rivalry we're all actually interested in has less to do with spandex superheroes and more to do with ground beef. While comic book titans duke it out on the streets of Gotham or whatever, Umami Burger and Shake Shack are grappling for our appetites and our love. The two burger juggernauts, based in Los Angeles and New York City respectively, both recently set up shop with their inaugural Chicago locations (both with more to come). But which one has what it takes to reign supreme in our fair city? Let's investigate. 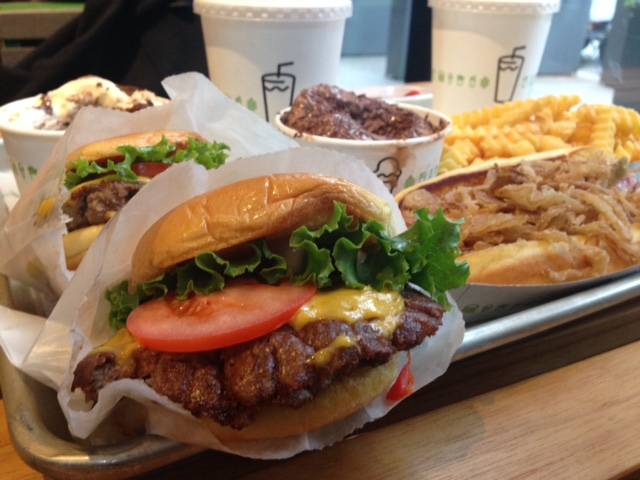 The Origins: Shake Shack originated in New York City in 2004 as a diminutive roadside Americana-inspired counter spot for hot dogs, burgers, fries, and frozen custard. The formula, contrived by hospitality wunderkind Danny Meyer, was a simple one, yet supreme in its simplicity, honing in on a few basic ingredients and dishes. By doing so, he was able to mastermind a new era of fast-casual burger-hot dog-fries dining, giving the world something new and fresh to salivate over instead of having to settle for unhealthy mediocrity. Umami Burger, on the other hand, skewed more upscale when it premiered in L.A. in 2009. Founded by Adam Fleischman, Umami Burger was crafted as a sit-down burger restaurant focused on highlighting the savory umami senses. Thus, burgers are thick, beefy, and luscious, heaped with ingredients like truffle sauce, Parmesan crisps, and mushrooms. It put burgers in a new spotlight, showing how versatile burgers could be, as well as how capable they were of driving a full-service restaurant.

Point: Shake Shack. Simpler, more wholesome origins are much more tangible and tantalizing for most Chicagoans. If an outsider is going to come into our city, it had better be hospitality-focused and humble. And simplicity doesn't hurt either.

The Food: As the name suggests, Umami Burger is all about that fifth sensory point; the one that detects savory, earthy flavors. These ingredients and senses lend themselves to a beef-tastic, burly menu befitting a full-service, sit-down dinner. Along with smashed potatoes, salads, and non-burger sandwiches, the burgers fill up much of the concise menu at Umami Burger, which makes sense considering it doesn't get much more savory than a burger. Unlike most burger spots, Umami does a masterful job of crafting burger patties that are soft, juicy, and supremely beefy, oozing luscious umami in every bite. These things are rich and intense, like a jus-infused slab of meatloaf. Served on perfectly sized, fluffy buns with evenly composed add-ons like bacon, beer cheese, and giardiniera, they're more like composed entrees that happen to be served on buns than typical burgers. Kudos for the effort. Shake Shack, meanwhile, unabashedly peddles its modest, addictive quick service burgers enrobed in greasy paper, adjoined by crinkle-cut fries and thick s'more pie-enriched custard concretes. The namesake Shack Burger is all you need to know, the perfect example of the restaurant's penchant for refined simplicity and consistency. They've managed to create a product that is reliably salacious, salty, meaty, cheesy, and saucy, all folded neatly inside a buttery, marshmallow-soft bun reminiscent of Hawaiian bread. One bite is all it takes to fall under the spell, a sensory overload rare to find in food these days.

Point: Shake Shack. It's damn near impossible to beat that Shack Burger.

The Neighborhood: One of the most telling qualities about an outside restaurant group coming into Chicago for the first time is where they decide to set up shop. It's quite insightful in regards to their research and efforts, determining just the right fit for their brands and acclimating themselves to the city. For Shake Shack, their first location is River North, one block west of Michigan Avenue and across the street from another New York City import: Eataly. Capitalizing on the incessant foot traffic and downtown hustle and bustle, it makes perfect sense for Shack Shack to put down roots in the frenzied 'hood, and judging by the constant lines out the door it's going to work out well for them. Umami Burger picked a somewhat less expected neighborhood for their debut: Wicker Park. When most newcomers arrive in Chicago, they tend to stick to the downtown area, so Umami earns props for venturing outside the confines of typical tourist Mecca. Instead, they researched heavily and deeply to determine the neighborhood that was just the right fit for their brand, deeming Wicker Park hip enough — and with the right mix of shoppers, residents, hipsters, etc. — the proper foray into the Chicago dining landscape. 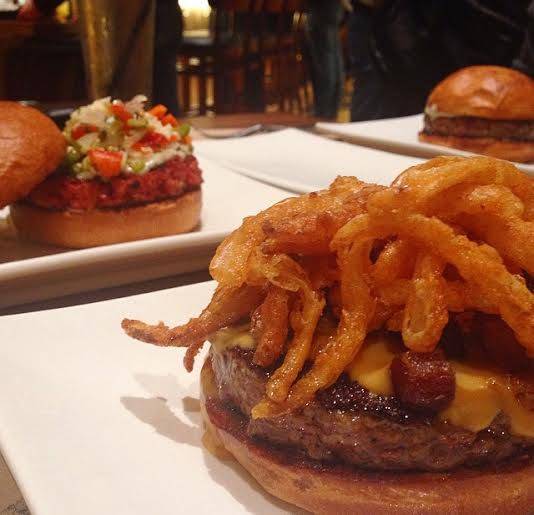 The Vibe: Even more unexpected than the neighborhood choice for Umami Burger is their decor, which can best be described as garage chic. Immersed in raw-looking wood, the space looks like it could double as a woodworking classroom. It features a tall bar in the front, followed by a loud dining room with tables and booths. Splashy, bright artwork illuminates the stark space a bit, while giddy servers dart around from table to table proclaiming their love for "Manly Burgers" and whiskey cocktails. It's all a bit outré and unbecoming for a burger restaurant, especially when wait times reach up to an hour and a half. At Shake Shack, the first thing you'll notice is the line winding down the block. Don't be nervous, though, because the fast-casual format ensures the line moves quickly. Once inside, the space is large and airy enough so you won't feel congested or rushed. The decor is highly metropolitan, offering a sleek, cute update on the fast-food template.

Victor: If there's one hospitality guru who knows how to expand and adapt to various dining scenes its Danny Meyer and Union Square Hospitality Group. Having broadened their brand overseas and across the country, they've managed to take Shake Shack to a whole new level of fast-casual dining. By partnering with local Midwestern farms and Chicago spots like Glazed & Infused, Publican Quality Meats, and Bang Bang Pie for their Chicago menu, Shake Shack does a fine job of adhering to local origins while adapting to new environments, and that's an impressive trait. And that burger is something I would crave on my death bed.