As much as I'd be inclined to deride a restaurant that lists "Burrata Be Kidding Me" as a menu item, the gimmickry of Parlor Pizza Bar comes as a bit of a welcome respite from the scenery hustle and bustle that inundates much of the West Loop. The juxtaposition of a silly, splashy, and chainy pizza bar directly across the street from Soho House, the chicest thing to happen to Chicago since Oak Street, pays for itself in amusement alone. For all the pratfalls of Parlor Pizza Bar, of which there are plenty, the restaurant fills a distinct and wholly necessary niche along the Restaurant Row corridor, and for that I welcome it. 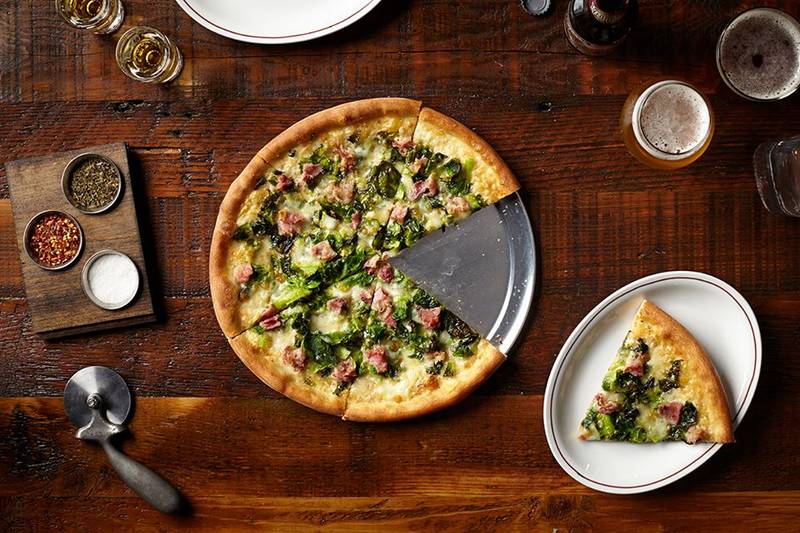 
Taking a page from the "go big or go home" mantra, Parlor Pizza Bar is downright Herculean. Multiple pizza ovens surround the space, primed for feeding hordes of people who fill the cavernous space, line up along the enormous central bar, and mingle outside on the gigantic patio or rooftop (weather permitting, which it usually won't anymore). The space has the feel of a palatial suburban chain restaurant, complete with servers clad in outfits that make them look like they're trying to personify some sort of hipster Wicker Park dress code; but of course, hipster dress code is an oxymoron, so here it comes off contrived and gaudy. The service is also a tad immature and inept. Staff is friendly and bubbly enough, but it's grating having to flag someone down for every single thing. Upon entry, you're greeted by a pizza oven to the right and a counter confusingly lined with cupcakes and whoopie pies, which I later learned are from West Town Bakery even though our waitress called it West End Bakery. There's also a bunch of crates and boxes as decoration, one of which features the words "farm fresh," which is funny in that said box is filled with cookies.


The menu at Parlor Pizza Bar reads like a chain-lover's dream come true. All the requisite puns and quirk are present and accounted for, speckled throughout the menu in the form of small plates, salads, pizzas, sides, and something called "pizza-ish," which is actually not even close to pizza, mostly just sandwiches and burgers. The beet and spinach salad is a nice, refreshing take on the classic combo, outfitted with goat cheese, smoky walnuts, apple slivers, and a surprising smear of pesto along the base of the plate. For pizzas, the Brussel Shuffle showcases a pleasant usage of Brussels sprouts, sliced and diced atop the pie with lemon zest, pancetta, Parmesan, mozzarella, and garlic. The real winner of the night, however, was the incomparable and adorable Burrata Be Kidding Me. Not only was the Burrata creamy and tangy to a tee, bubbling along the bottom layer of the pizza, but the accoutrements of zesty arugula, earthy white truffle oil, and lemon vinaigrette came together to make for addictive bite after addictive bite. Beverage-wise, I would suggest sticking to mocktail spritzers. My grapefruit-maple mocktail was particularly juicy and effervescent. Boozy Moscow Mules proved less satisfying and too watery.


All in all, despite a few misteps and zany antics, Parlor Pizza Bar stands out as a nice, casual reprieve from the rest of the see-and-be-seen fray in the West Loop.