Considering the winter we've been having, we could all use a little getaway. But since the airports are a snowy shitshow, the next best bet may very well be I | O Urban Roofscape at The Godfrey Hotel. The splashy, sprawling restaurant on the fourth floor of the new hotel looks like something out of Miami or Las Vegas, where Bravo might film a scene for a Real Housewives franchise. But in a good way. Because in all its chic, sexy, clubby glory, I | O Urban Roofscape offers a warming reprieve from the season. The food and drinks aren't half bad either. Here's what you need to know about I | O Urban Roofscape: 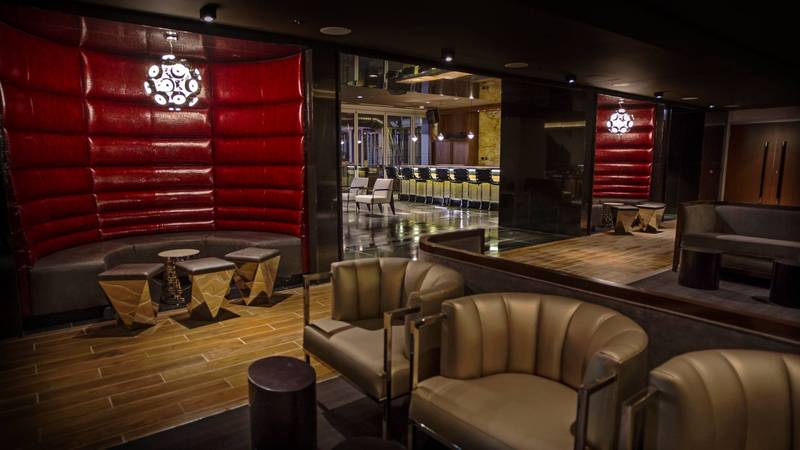 Unlike pretty much any restaurant in town, I | O Urban Roofscape offers a completely transportive experience that takes guests out of Chicago and into the sunny nexus of Miami Beach. Or something like that. Fact is, this place is sexy, sleek, and fun. And it's got a massive retractable glass wall/roof that, come summer, will make for the hippest patio/rooftop space downtown. Much of the restaurant space is lounge-y and casual, like a massive cabana, outfitted with two bar areas, a video mural projecting illustrious nature scenes, and a slick wall of flowing water. A couple of patios accentuate the space, one outfitted with a fireplace.

Executive chef Riley Huddleston curates the menus at I | O Urban Roofscape, offering a contemporary riff on Chicago-friendly faves such as lamb chops, burgers, steak sandwiches, and deep-dish apple pie. Diners can go light with seared ahi tuna and a vivifying house salad awash with citrus, or they can go all out with truffle mac & cheese, prime beef bolognese, and a BLT. The french fries are not to be missed, especially considering the fact that Huddleston is a partner at an Idaho french fry concept. And back to that apple pie. It's excellent. The cupcake-sized pie is made with a hazelnut and dehydrated apple crust, filled with caremelized niblets of apples, and heaped with cinnamon ice cream.

Taking a food-focused approach to the drinks, Huddleston also oversees the cocktail program at I | O Urban Roofscape. Chef-made drinks utilize mathematics (our teachers told us it would come in handy!) and recipe logic to craft unique variations on classics such as Negronis, Cosmos, and a margarita made with as many ingredients as a mole sauce. The resulting drinks are balanced, luscious, and invigorating. For something exceptionally wintry, spring for the Brandy Alexander, a chocolate-y milkshake-like quaff made with Courvoisier, creme de cacao, vanilla ice cream, and nutmeg.