Like a genre-bending pop star equipped with the ability to thoroughly reinvent their image periodically, One Off Hospitality has a knack for honing sharp new concepts for each new venture. If we're comparing the powerhouse restaurant group to, say, Beyonce and her various career arcs through her album history, Nico Osteria would be One Off's 4, Publican Quality Meats would be the Sasha Fierce to The Publican's Beyonce, and Big Star would be their B-Day. Dove's Luncheonette represents a bold new facet for One Off, however, one that doesn't fit so easily into a Beyonce paradigm. And that's totally fine, considering Paul Kahan and co. are the only contingent in town capable of pulling off the type of chain-looking concept Dove's represents and giving it the gourmet spin it deserves.

More so than any of Dove's sister spots, of which there are many, this most recent entry runs the highest risk of feeling contrived. Everything from the motif to the vibe to the hulking platters of chicken fried chicken feels like One Off Hospitality as viewed through a Disney-fied lens. It's more theme park-like than anything else the company has touched, complete with Southwest-emblazoned place mats, nostalgic swivel stools, and more wall photography than Planet Hollywood. But look a little closer beyond the splashy surface and you'll find a Tex-Mex-inspired diner worth its salt(ed margarita). 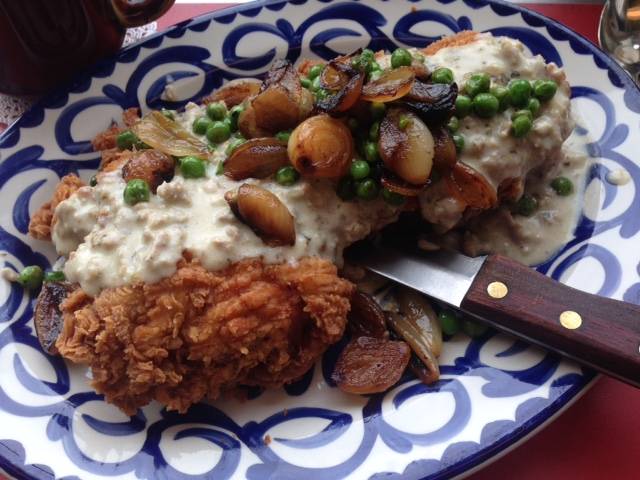 Stepping into this diminutive diner next to Big Star feels like stepping into a gaudy, bygone Southwestern lunch counter. Mission accomplished, One Off. It's so Hollywood-like, in fact, that my initial reaction to the space was how much it felt like a set piece from No Country For Old Men. This diner is one Dorothy Hamill haircut short of a Coen Brothers sequel. It boasts the same hustle-bustle energy of a roadside diner, but with hipper clientele. Friendly hosts and bartenders serve as your guides through a Tex-Mex-style feast for the senses. It hits your eyes from all the timeworn photography dotting the walls. It hits your ears from the whirling customers roving in and out. It hits your nose from the gut-busting platters of food darting forth from the kitchen. Speaking of which...

Borrowing a page from the Big Star playbook of relatively concise menus, Dove's offerings are thankfully straightforward and focused. Several main plates are accompanied by a couple ceviches, vegetables, and side dishes. Done and done. The chile-happy menu is a Southwestern dream come true, featuring lunch counter comforts like ham and cheese tortas, sweet corn tamal, pozole, a tempura-light chile relleno, and an indulgent portion of chicken fried chicken, so tender and succulent the entire thing tastes like a jumbo chicken tender slathered in chorizo verde gravy, with a smattering of green peas for welcome vibrancy. Flavors here are huge, thanks to the omnipresence of chile as well as the relentless excess. But the bold, precise flavors make it enjoyable to scarf, unlike most like-minded places that sacrifice ingredient quality for the sake of heinous decadence. As overwrought as the chicken fried chicken may seem, it's still a damn fine piece of fried chicken at its core. As intense as the chicken- and queso-filled red chile enchiladas may look, they sport a merciful balance uncommon around these types of dishes. It's Tex-Mex cuisine with palpable finesse, it's just harder to see under all that gravy.

Drink-wise, there's venerable Dark Matter Coffee, Rare Tea Cellars tea, and bracing cocktails in line with margaritas, palomas, chipotle-scented Bloody Marys, and other beverages you'd expect to quaff while hungover in the Texan desert. Be sure and finish your meal with some ice cream or custom made pies from Hoosier Mama Pie Company, like the deservedly popular horchata pie.

Dove's boldly goes where no other One Off Hospitality outpost has gone. It may be hard to classify and analyze at first; perhaps it's even a little confusing. But like the most iconic superstars well-versed in entertainment, Dove's knows how to keep us hungrily on our toes.