Sure, horses take top billing for the Kentucky Derby, but let's be honest, the equine event is as much about the hats, the food, the drinks, and the pomp and circumstance. Derby Day is an opportunity to embrace spring in all its minty, sunny glory, and that's an occasion worth celebrating. We may not be near Churchill Downs, but you can pretend as much with Chicago's miscellany of Derby Day specials happening this weekend. 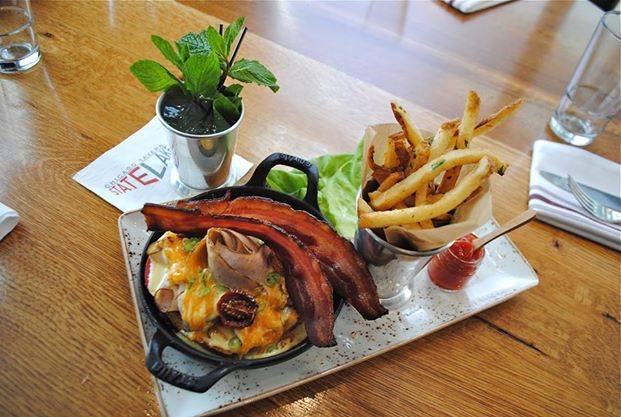 
State and Lake Chicago Tavern: Mint Juleps and hot brown sandwiches are quintessential Kentucky flavors for Derby Day, and State and Lake Chicago Tavern has your bases covered this weekend with both items on special. The Juleps are made with Makers Mark, while the iconic open-faced sandwich consists of turkey, bacon, and Mornay sauce. Far beyond your standard hot brown, though, this version is extra special and diligent. Heritage turkey breast is brined for 24 hours before getting rubbed with pastrami seasoning and slow-smoking over sugar maple. It's heaped on rich pain di mie, served with tomatoes, drenched in Parmesan- and cheddar-enriched Mornay, and topped with house-smoked bacon.


Chicago q: The second annual Derby q party at Chicago q takes place May 3 from 2:00 p.m. until 6:00 p.m. The restaurant already looks like a Southern mansion as is, let alone when the Derby is being broadcast on large televisions throughout the space and a Southern-style buffet is prime for grazing. For $42, guests gain access to an all-you-can-eat buffet plus a drink. Chicago q will also host numerous contests, such as Best Derby Hat and Best Dressed Gentleman. A portion of the proceeds from the party benefit the Ronald McDonald House near Lurie Children's.


2 Sparrows: A brunch-focused restaurant may not seem the most obvious location for a Mint Julep fix, but 2 Sparrows satiates with refreshing juleps made with Hirsch Bourbon and lemon, making for the perfect Derby morning pick-me-up.


Rebar: Trump International Hotel & Tower lets its hair down for a boisterois "Hat & Suit Party" on May 3 at Rebar. Beginning at 3:00 p.m., the cocktail bar will be doling out specials such as Mint Juleps, crab cakes with Creole remoulade, shrimp dip devine, and hot brown sandwiches.


Derby: Obviously, the Derby is best celebrated at a restaurant/bar named Derby. Especially when said bar is serving premium brunch and lunch buffets on Derby Day, along with cash prizes, giveaways, and contests.


RM Champagne Salon: Leave it to RM Champagne Salon to class up Derby Day shenanigans. Case in point: oysters with Mint Julep granite and cocktails such as Parisol Punch and the RM Julep. There will also be a large projector displaying the Derby in all its action-packed glory. The events kick off at 1:00 p.m.


Hutch: Derby Day antics require proper morning fuel. Such as the Derby Day brunch at Hutch. Southern comfort sensations such as chicken & waffles, bone-in ham and eggs, and biscuits with sausage gravy are all on hand, along with requisite Mint Juleps. Taking place from 10:00 a.m. until 3:00 p.m., the restaurant will air the Derby Prep Show, and diners are encouraged to bring their best garb for the chance to win Hat Contests.


Tavern on Rush: It's not every Derby Hat contest that promises a bottle of Dom Perignon as reward. So you'd best bring your best hat to Tavern on Rush's Derby Day party taking place May 3. The third annual festivities on Rush Street also include Mint Julep specials and a roster of Kentucky-inspired eats such as Kentucky burgoo soup, fried chicken chopped salad, and Kentucky bourbon banana bread pudding.


Untitled: Mint Juleps, bluegrass, complimentary appetizers, and a massive screen make for excellent Derby Day frivolity at Untitled. Hosted in conjunction with Adopted STYLE, Cheeky Chicago, J. Toor Clothing, and The Almanac Mag, the event is free to attend (drinks are extra) and takes place from 2:00 p.m. until 5:00 p.m.