Aside from mimosas and Bloody Mary's, it's hard to drink liquor in the a.m. without attracting some judgmental stares. Well thank god for Dark Matter Coffee, because now we have an excuse to drink bourbon for breakfast! Well sorta. The always boundary-pushing, perpetually delicious coffee company just debuted bourbon barrel-aged coffee, putting a little extra somethin' in your morning cup of Joe.


We've heard of bourbon barrel-aged beer, maple syrup, rum, and other potables and pourables, so coffee is a natural progression, especially considering bourbon and coffee are two of nature's most beloved beverages. To infuse the two elixirs, the Dark Matter team moseyed up to the bar at Goose Island with some green coffee beans and two bourbon barrels. Two of Dark Matter's direct-trade coffees, Pacas Joven and El Eden, were used for the first round of bourbon barrel aging. The results are magical, giving way to coffee ripe with toasty bourbon-y aromas, plus notes of coconut and grape. Mmmhmm. 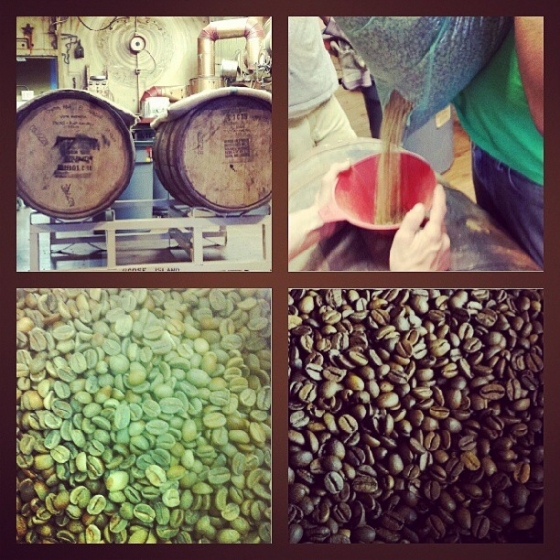 
Just as bygone shipping merchants used to transport coffee from the Dutch East Indies via wine and rum barrels, Dark Matter strives to reincarnate those old-world traditions and flavors with its barrel-aging endeavors. Bourbon is first, but in the future the coffee shop plans to dabble with rum, Scotch, and other barrels.


Naturally, bourbon barrel-aged coffee is limited, with only 20 12-oz. bags per batch at $25 per bag. Coffee is available at Dark Matter retail locations and their website. Cheers!