Cinco de Mayo is an opportunity to go a little wild with tacos and margaritas, and Chicago's got its fair share of both. Here's where to eat and drink on Cinco de Mayo: 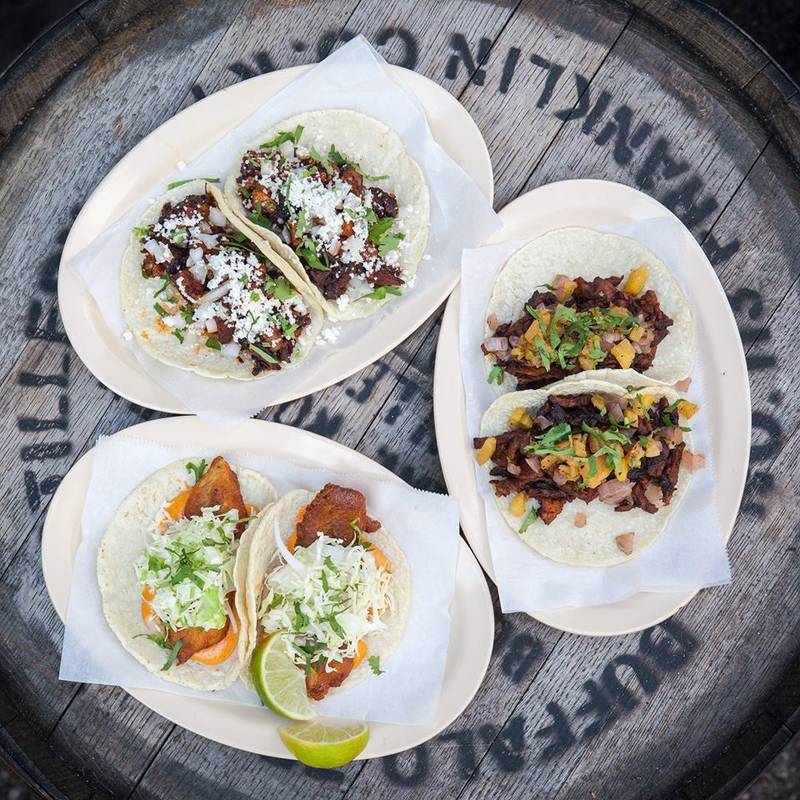 
Honey Butter Fried Chicken: The Avondale restaurant may be known for fried chicken, but chefs Christine Cikowski and Joshua Kulp are just as adept with crafty Mexican creations. Maybe it's the essence of the Mexican restaurant that previously occupied the space permeating their souls? On Cinco de Mayo, Honey Butter will be offering a special fixed price feast of Mexican dishes, beer, and margaritas for $45 per person. Seatings take place at 6:00 p.m. and 8:30 p.m., each one laden with chips and salsa, pork belly chicharron sopes, green chile lamb tamales, smoked chicken posole, and rhubarb horchata popsicles. The entry price also includes a 5 Rabbit beer and a margarita. Tickets can be purchased here.


Public House: A Mexican-themed beer dinner is on deck for Cinco de Mayo at Public House, featuring the zesty handiwork of chef David Blonsky paired with Mexican beers. Starting at 6:00 p.m., the event kicks off with margaritas and Michelada Coronas followed by family-style appetizers such as chicken chicharrones and green chile tortilla chips. First courses include smoked shrimp and cucumber ceviche and guacamole, while the next course is chicken enchiladas, followed by pork shank mole. For dessert, it's sopapillas with agave honey and Mexican hot chocolate sauce. The cost is $40 per person and tickets can be purchased at publichousechicago/cinco.


Mezcalina: An apt excursion for Cinco de Mayo is Mezcalina, a somewhat clandestine Mexican cantina tucked away in River East. In the days leading up to Cinco de Mayo (May 2 through May 5), Mezcalina will be doling out free tacos to patrons who make a post on one of the restaurant's social media pages. There will also be $5 specials on items like taco trios, guacamole, tortas, and shrimp ceviche. And on Cinco de Mayo, they'll feature a live Spanish guitarist from 5:00 p.m. until 7:00 p.m.


Mercadito: For Mercadito, Cinco de Mayo is a holiday worth celebrating. Chef Patricio Sandoval kicks off festivities with a duo of Cinco de Mayo cooking demos on April 28 and April 29. Designed to showcase Cinco de Mayo history and flavors, as well as provide ideas for the perfect Cinco de Mayo fiesta at home, the lessons feature five courses paired with cocktails and cost $65 per person. Each one takes place at Double A below Mercadito. Then on Cinco de Mayo, Mercadito will be offering specials such as huaraches and Jalapeno Popper cocktails.


Nacional 27: Cinco de Mayo is a big deal for Nacional 27. Such a big deal in fact that festivities kick off on May 1 with samba lessons at 7:30 p.m., beer specials, and half-priced tapas and ceviche from 5:00 p.m. until 9:30 p.m. May 2 marks the debut of a new series called "Friday After Work," a very special happy hour stocked with margaritas, beer-ritas, tacos, beer, and a DJ. The next day, Nacional 27 features an enchilada dinner special along with margaritas and tequila flights. And on Cinco de Mayo, a $5 Latin Eats menu will be on hand starting at 5:00 p.m., along with a resident DJ and beer specials.


Big Star: How does a taco bar from the city's most popular taqueria sound? Good? Good. Big Star allows taco-lovers to bring a bit of Big Star home with them via a buffet-style setup of taco fixings. Full-service catering is also available for those less inclined to create their own tacos. To place an order, email margaret@bigstarchicago.com or call 312-860-1315.


The Boundary: Let's cut the crap. Cinco de Mayo is all about drinking. Get right down to business with drink specials at The Boundary available May 3 through May 5. The boisterous bar captures the energetic essence of the holiday to a tee, especially when margaritas, raspberry margaritas, and Coronitos are involved.