Burgers and Hot Dogs You Should Know

Nowadays, you can't swing a disheveled tourist without hitting a new burger and/or hot dog restaurant in Chicago. Seemingly every other day, there's a new eatery, a lavish new burger, a hulking new hot dog, perpetuating our status as a meat-obsessed metropolis. Which is proudly true. But just when you thought you'd seen it all when it comes to burgers and hot dogs in Chicago, two restaurants come along with novel creations unlike anything else. Tokio Pub is serving up a masterful rendition of the ramen burger that has been sweeping the country, while Underdog is discreetly cooking up taco-inspired hot dogs in subterranean Wicker Park. Here's the dish on two new must-try burgers and hot dogs. 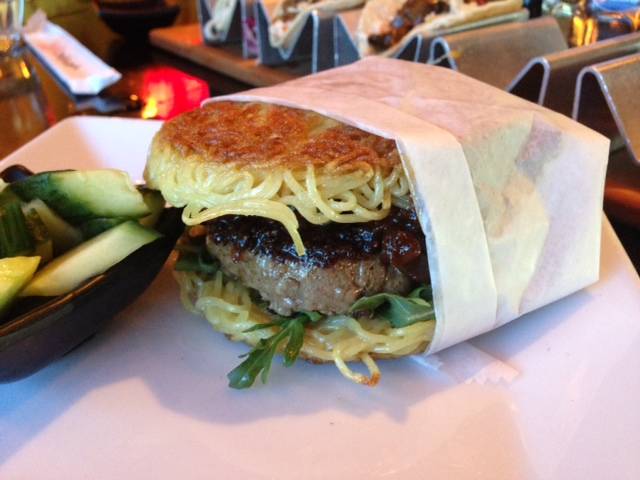 
Ramen Burger - Not Your Average Burgers and Hot Dogs

Unless you've been confined to a cave for the better part of a year, you've surely heard of the ramen burger. This culinary oddity was first concocted at Smorgasburg in Brooklyn by some mad scientist-like chef looking to fuse cuisines in one seamless, albeit messy, vessel. The resulting ramen burger was a juicy, beefy burger stacked between two ramen "patties" made by crisping piles of ramen in circular molds on the grill. Seems like a totally random, wtf-like idea, but customers went mad, and the idea spread like rapid fire in an Arizona desert. Before long, ramen burgers were more popular than Beanie Babies, ca. 1997. But curiously, there has still been a ramen burger-shaped void in Chicago. UNTIL NOW. Tokio Pub in Schaumburg fills that void with its own rendition of the ramen burger, and while I have no template to compare it to, it's a mighty fine interpretation if I do say so myself. Listed under the "pub grub" portion of the menu, the ramen burger is made in limited amounts daily, featuring Angus beef, soy "molasses," mizuna, and green onions. It's an umami bomb on a "bun." The noodles lend a welcome dose of crispiness to the experience, something lacking in standard burger buns. It's a little bit wonky, but totally wonderful and fun. 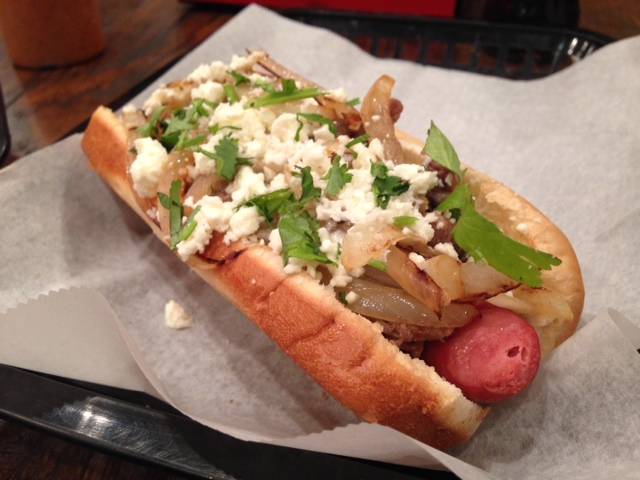 (The Panchito at Underdog)

When it comes to Burgers and Hot Dogs in Chicago, these are meaty creations that are rarely toyed with the way burgers are. More often than not, they are served simply with Chicago-style toppings, save for the occasional Hot Doug's or Franks N Dawgs-style outlet. Bridging the gap between cookie-cutter and outre is Underdog, the subterranean Wicker Park hot dog spot with a knack for encased meat (and burgers and fries, but that's another matter). What sets them apart is their array of "Mexi-Dogs," a perfect segue from the Mexican food served upstairs at Flash Taco, which is under the same ownership. It's clear that Mexican flavors reign supreme around these parts, perfectly exemplified in dogs such as the incomparable Panchito. A late-night staple, this dog originated from the taco cart hosted outside the restaurants on summer nights. Customers would patronize the cart and inquire about adding taco toppings to a hot dog. Sounds like drunken antics, but they were on to something. Underdog quickly experimented with the idea, adding carne asada, queso fresco, grilled onions, and cilantro atop a hot dog and creating the Panchito. The results are magical. The bottom layer is pure, sausage-y Americana, while the upper patina sings of robust Mexican flavors, invigorated with fresh cilantro and piquant onions.