In this week's batch of brunch bites, Doc B's Fresh Kitchen freshens up the brunch scene, while Public House Restaurant basically does the opposite, clogging arteries with its meaty new Bloody Mary. 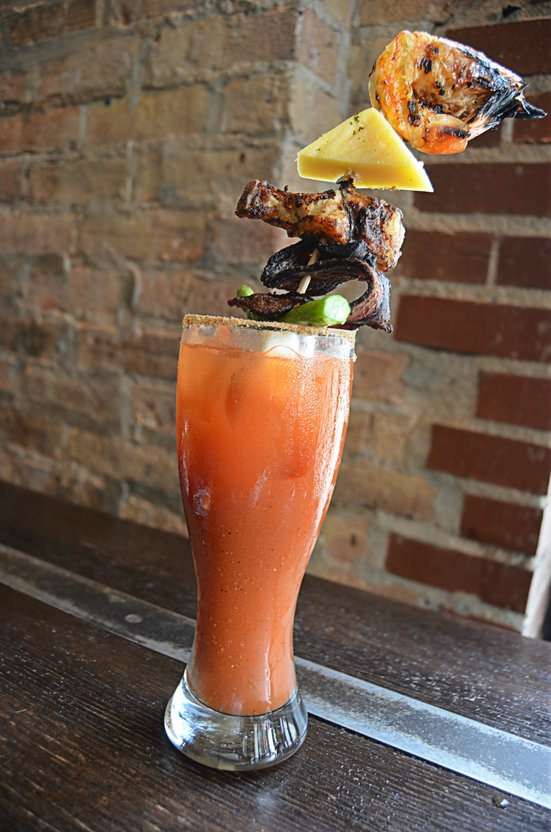 
The ethos at Gold Coast newcomer Doc B's Fresh Kitchen sounds like something the Dalai Lama would preach, emphasizing freshness and putting others first and treating friends like family and treating customers like friends, etc. It's all very lovely and very Berenstain Bears, but how does the food live up to those rosy sentiments? Wherein one might expect a brunch menu at such a place to be comprised entirely of wheatgrass and residual tofu water, Doc B's manages to talk the talk and walk the walk. They don't skimp on indulgences and guilty pleasures and comfort foods for their weekend brunch fare. Rather, they celebrate the brunch staples by freshening them up with grade-A ingredients and deft preparations. There's a miscellany of egg sandwiches, featuring options such as the Craveable with prosciutto, arugula, and sea salt; the Mom's Kitchen laden with Swiss, Italian sausage, and secret sauce; and the Red, White, and Bleu bursting with Danish blue cheese, bacon, roasted tomatoes, and onions. Pizzas adopt a brunch accent with toppings like breakfast sausage, fresh eggs, thin potatoes, bacon, and horseradish cream cheese. Just think of them as giant bagels. There are also several "classics," including corned beef hash, chicken and biscuits, and something called a cinn-a-swirl with cream cheese icing. Wonder what that could be.


After you've nourished yourself at Doc B's Fresh Kitchen, negate it by heading down the street to Public House and sucking down one of their new behemoth Bloody Mary's. This thing is more than just a hangover cure, it's a meal in and of itself, with a garnish that could feed a family of the most primal carnivores. It all starts with a piece of Monterey Jack cheese, followed by a smoked chicken wing, asparagus, three strips of anise-rubbed bacon, a mini Kobe beef corndog, a half stick of mozzarella cheese, and a Sriracha-glazed grilled shrimp. There's also a beverage under there in case you forgot.