Booze News: Sangria in the City

These days Spaniards drink more Gin & Tonics than sangria. But that wasn’t always the case, according to Mark Sotelino, the general manager at Lincoln Park mainstay Café Ba-Ba-Reeba.

More than 2,000 years ago, when the Romans ruled what is now Spain, everyone poured red wine in their drinking water because straight-up water wasn’t safe to consume. They eventually added pieces of fruit to liven up the beverages, but at some point it lost its appeal because the majority of Spaniards now drink those aforementioned Gin & Tonics.

Sotelino says sangria sipping remains “a touristy thing in Spain,” and the Spanish-focused eatery embraces the old-school tradition in Chicago with six different varieties daily—including a seasonal offering. Café Ba-Ba-Reeba’s sangria is so popular, in fact, that the restaurant goes through 250 gallons a week. The classic red wine sangria is most popular, with white peach and passion fruit also big sellers. 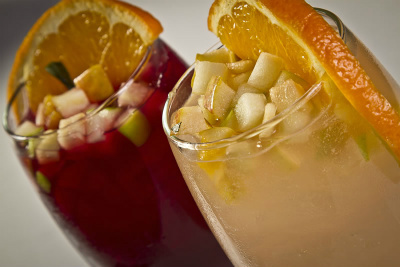 The restaurant’s featured sangria since opening in 1985, and to more effectively serve it, a draft system was installed about 10 years ago. All ingredients are made in-house, and with sangria on draft, guests are assured they’ll get the same cocktail each time. Café Ba-Ba-Reeba’s sangria may be ordered by the glass, pitcher (six to seven glasses) or half pitcher (three to four glasses).

Additional spots around town where you can enjoy a great glass of sangria:

Café Iberico. The always bustling Spanish spot features affordable sangria by the pitcher. And that’s a good thing because there’s typically a wait for a table and you’ll need something to do at the bar as you wait.

La Taberna Tapas on Halsted. At the intimate Little Italy hang guests may order sangria by the flight, glass or pitcher. The peach cava sangria is infused with fresh peaches and topped with sparkling wine.

Mercat a la Planxa. The Catalonian-inspired restaurant also offers sangria by the flight. Those who order it will have the opportunity to sample all three varieties: white sangria (pineapple, coconut), red sangria (cherry, pink perppercorn, bay leaf) or a seasonal offering.