Asparagus is the Crutch That Helps Menus Emerge From Winter Hibernation

Living in Chicago often means that spring is stunted, which subsequently means that every year we're all ravenous for non-squash ingredients by May. One of the most popular items to spring forth this time of year is asparagus, and as demonstrated by the overloaded tables at Green City Market, they're (finally) readily available. And chefs are wasting no times going asparagus crazy. Here's where you can get your asparagus on now:


Using asparagus plucked from Green City Market (which just launched its outdoor season this past weekend, by the way), Two is serving up asparagus with a side of sheer indulgence. The glistening green spears are seasoned with sea salt, bedecked with shaved foie gras, and slivers of grilled lemon. It's a simple preparation that preserves the integrity of the ingredient, especially since after such a prolongued winter people just want to sink their teeth into spring flavor. But simple doesn't have to mean bland, as evidenced by the decadence flaked on top. 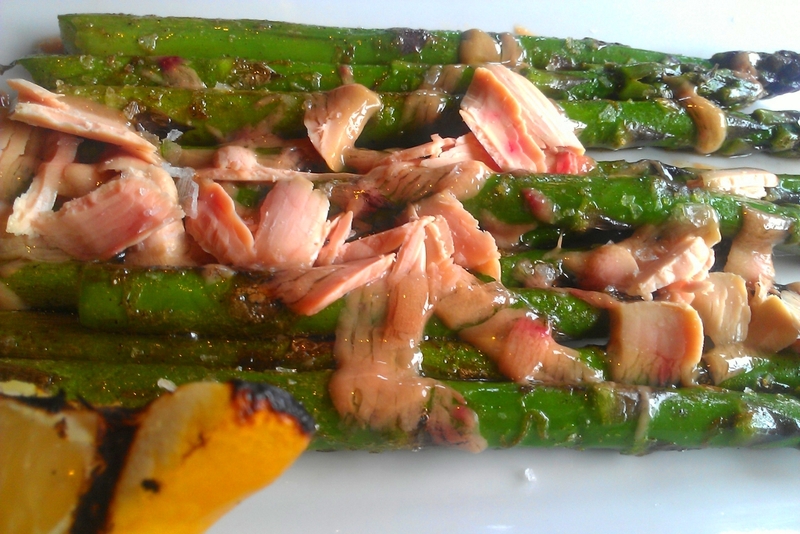 
I must have missed the memo that asparagus and foie gras are the new PB&J, because there it is again on BOKA's new spring menu. This dish is a little more complex, though. It's a hot appetizer featuring seared foie gras and white asparagus with black licorice quickbread, pickled green strawberries, rhubarb, and anise hyssop. All in all, a spectacular spring punch in the mouth, a welcome blow after months of root vegetables. 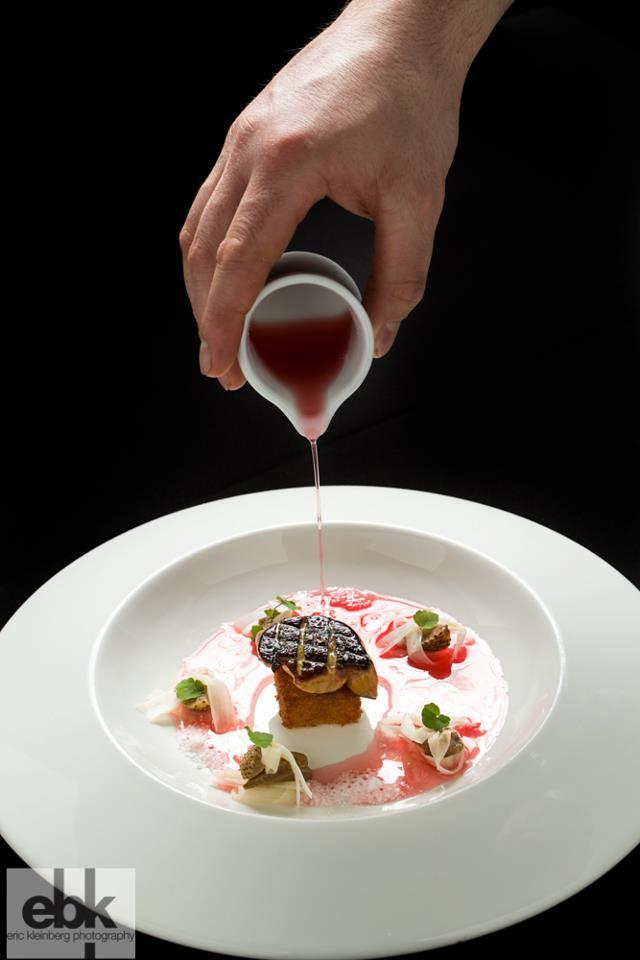 
Telegraph has a way with tartines. I'm so obsessed with their tartines that I've been known to order two, one as an appetizer and one as an entree. I can feel your judgemental eyes on me. Now that spring has finally sprung (there's a cliche I'll never get tired of), I'm excited about their new asparagus tartine, slathered in smoked char taramosalata, essentially Greece's salty answer to salmon spread. It's flecked with shaved asparagus and a spritz of bay leaf vinaigrette. 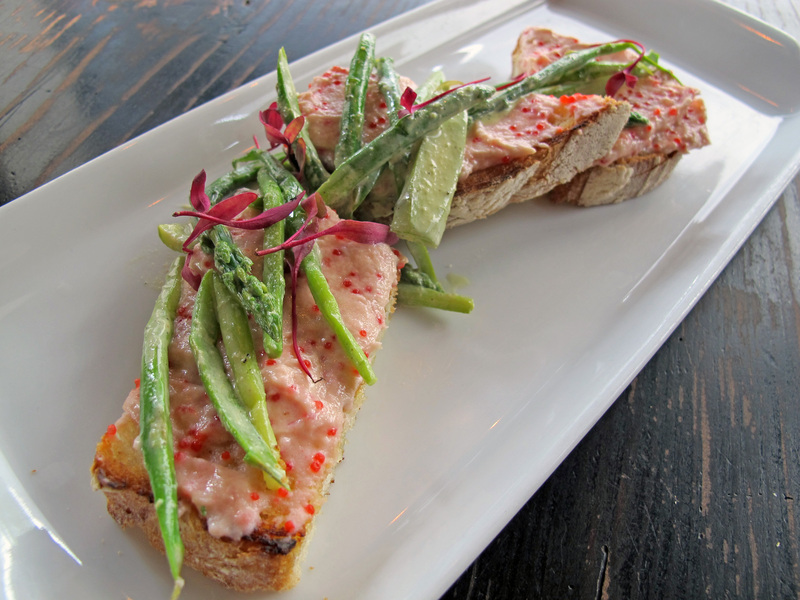 
If there's one restaurant that could pry me away from city limits, it's Vie, Paul Virant's bastion of contemporary Midwestern cuisine. The restaurant is driven by the seasons and menus change often, readily interspersed with Virant's housemade preserves and pickles. One of the first spring debuts on the menu is roasted asparagus from Mick Klug Farm, watercress, dill, torn grilled bread, and two versions of garlic: a fresh garlic aïoli and pickled garlic. 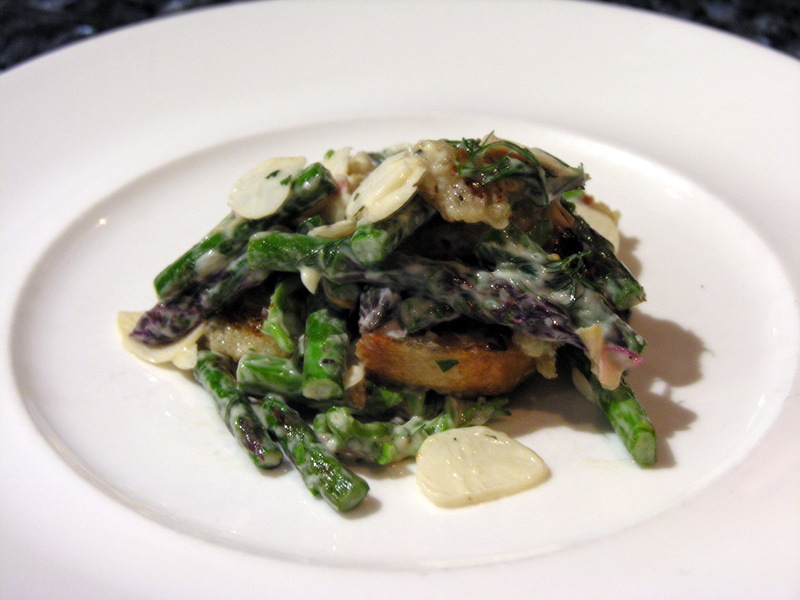 
If someone were to serve asparagus and ramps on the same plate, would your head explode from spring-y overstimulation? Put a helmet on and head to Old Town Social for this week's new asparagus dish, consisting of both raw and blanched asparagus, housemade prosciutto, parsley leaves, Pecorino Romano, and pickled ramps as well as charred ramp vinaigrette. The dish is topped with a poached egg, because that's never a bad idea. 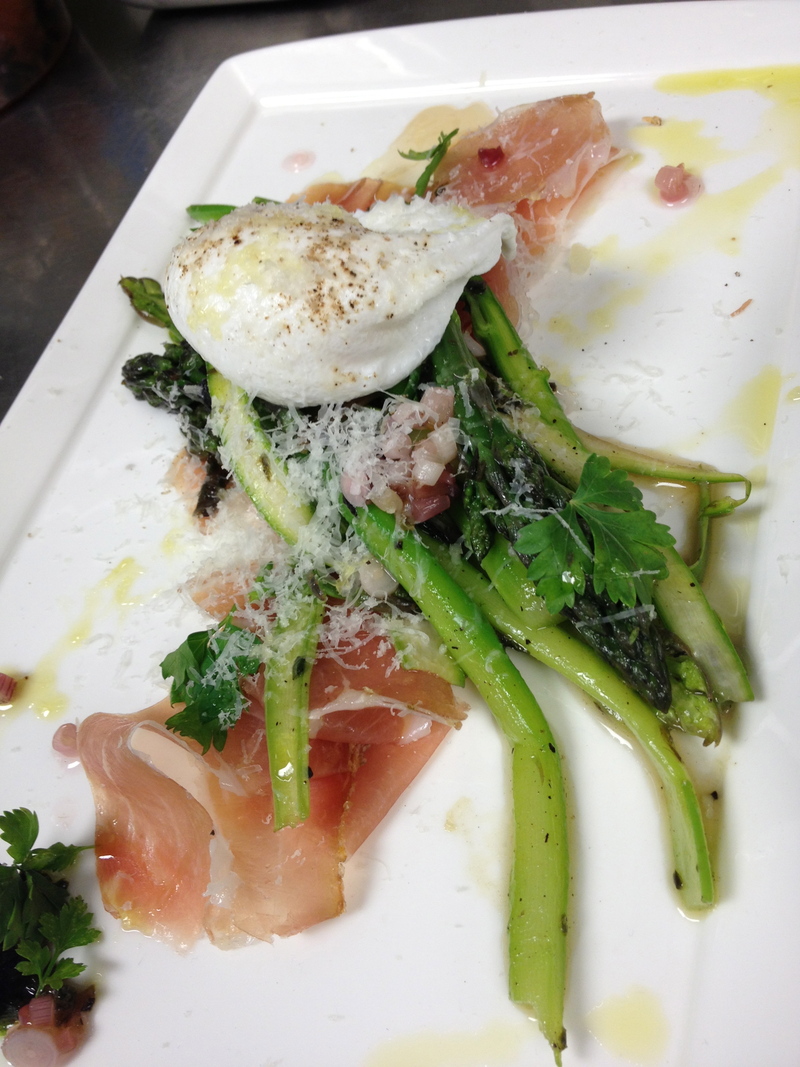 
Asparagus can also be found on the brand new lunch menu at Baume & Brix in the form of grilled asparagus with arugula, crostini, chicken pâté, and a 63-degree egg. Certainly makes for a sophisticated lunch, no?


Like asparagus? Like pizza? Then get thee to La Madia pronto for their new asparagus pizza. As with most pizzas on the menu, the latest addition is a simple pie, featuring only a few ingredients, so as to showcase their pristine flavors. Morsels of asparagus are joined by an organic farm egg and pecorino cheese, making for a nice spring addition to the mod pizza parlor.


And there's lots more where this came from. Get out there and eat asparagus!