Hot on the heels of last month's successful collaboration dinner with Arami, Trenchermen is at it again this month, and this time they're planning something St. Louis-tastic. Taking place August 27, the event dubbed "A Dinner Upriver" is a veritable group hug of Midwestern cookery, showcasing talents from both Chicago and St. Louis. The event is hosted by Trenchermen's chief Trencherman Pat Sheerin, who has invited Chicago chef and St. Louis native Paul Virant, along with St. Louis chefs Gerard Craft and Kevin Nashan, to join him in the kitchen and cook up a stellar Midwestern meal.


A Dinner Upriver is a five-course beer dinner featuring Perennial Artisan Ales from St. Louis. Each course comes with a pairing selected by the chef in charge of said dish. Trenchermen doles out two dishes, while the rest of the chefs prepare one each. It's a single-seating affair that kicks off with a reception at 6:30 p.m., when guests can nosh on passed plates prepared by the evening's chefs. Perennial beers will be on tap behind the bar for the night, available to any customers all night long, regardless of their participation in the dinner.


You know and love Sheerin, but here's some knowledge on the guest chefs. Virant is a St. Louis expat who rose to acclaim in Chicago at his Western Springs restaurant Vie before opening Perennial Virant in Chicago. He makes a lot of preserves and pickles, he has a book on the matter, and he's a big deal. Gerard Craft has carved out his own restaurant empire in St. Louis, originating with Niche Restautant and building upon that with varying concepts such as Brasserie by Niche, a bar called Taste by Niche, and most recently, a family-friendly endeavor called Pastaria by Niche. Kevin Nashan is an exemplar of St. Louis cookery, at the helm of his longstanding Sidney Street Cafe.


Only 75 seats are available for the special dinner, and tickets cost $100 per person. Reservations for A Dinner Upriver can be made by calling Trenchermen at 773-661-1540. 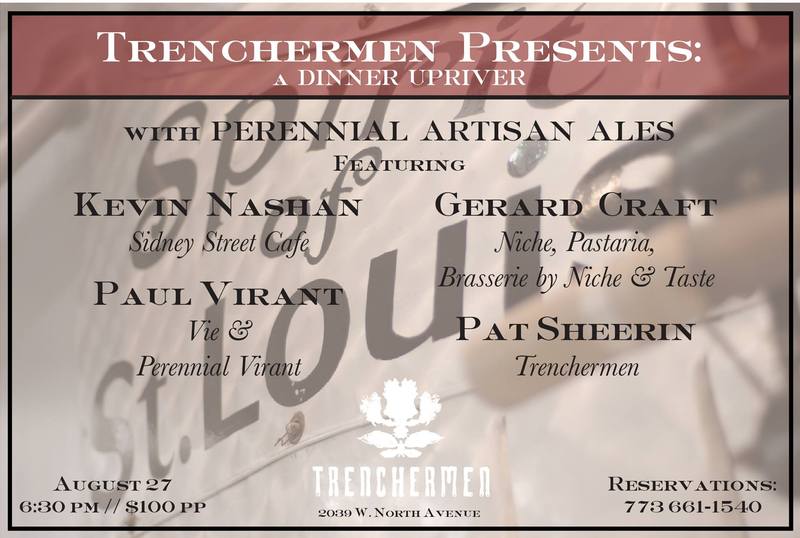