Haywood Tavern began as a vision between Rodney Staton & Jason Balutan of creating an inviting neighborhood space with quality food, a great drink selection and a welcoming, casual environment. Jason was tending bar at the nearby California Clipper when he met Rodney, who moved to Chicago from Las Vegas and originally New Orleans, eventually spending time in the kitchens of Longman & Eagle, Spiaggia and heading up the redevelopment of Bite Cafe, while Jason ran neighborhood favorite Blind Robin. Many years and beers later, the two realized their dream of opening a tavern in the area they call home. The menu features always-changing food items along with the regular tavern favorites, made with the best ingredients at reasonable prices. It's a European-inspired corner tavern with a focus on quality, aiming to break the mediocre bar food stereotype while embracing diversity and maintaing the casual neighborhood feel. 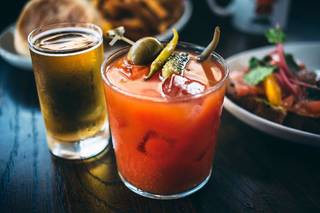