This is the factory store for Bende, Inc., makers of Hungarian Brand salami, smoked bacon and other wonderful European-style meats. Along with Bende's own products, you'll find a wealth of imported goods, including cheeses, pastries, candies and Hungarian spirits such as Tokaji, palinka, and Egri Bikaver.

The signature salami, found in stores all over the country, is made at the adjoining Vernon Hills plant. It comes in two distinct styles: the white wrapped Teli (which means "winter" in Hungarian, so called because before modern refrigeration, salami could only be made during the coldest months, with a fine grind and mild flavor; and the spicier Csabai (named for the city of Csaba, where it was first made), combining coarsely chopped meat with Hungarian paprika.

Three generations of the Bende family are behind Hungarian Brand. Miklos Bende, descendant of a line of butchers, brought his family to Chicago from Miskolc in northern Hungary in 1956, escaping the Hungarian Revolution. Going to farms in Indiana to buy pigs, Bende would cure the meat and sell it on the street in Chicago's South Side Burnside neighborhood, a strongly Hungarian area. Bende later opened a delicatessen at Lincoln and Montrose avenues, which he ran for many years.

Bende and his son, also Miklos, began manufacturing and wholesaling his Hungarian-style meats in 1972. They opened this retail store next to the Vernon Hills factory in 1996, launching a second store in Glen Ellyn in 2005. The eldest Miklos, now in his 90s, came to work daily till just a few years ago; the business is now managed by his son and grandchildren, including grandson Miklos III and granddaughter, company president Eniko Suto. 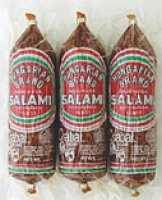 Offbeat, Self-Parking in Lot or Garage