Located in Evanston, just north of Chicago, Ryan Field is a stadium primarily used by the Northwestern University Wildcats football team. The field opened in 1926, and seats 47,130 people. It was renamed Ryan Field in 1997 after Patrick G. Ryan, the chairman of Northwestern's board of trustees. 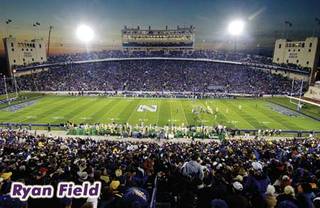