Navy Pier, Chicago's number one tourist attraction, is a 3,300-foot long pier on the city's shoreline. Built in 1916 as part of the Plan of Chicago developed by noted architect Daniel Burnham, Navy Pier was originally designed to serve as a mixed-purpose piece of public infrastructure, whose primary function was as a cargo facility for lake freighters. Today, Navy Pier houses numerous tourist attractions, from the Chicago Children's Museum to a massive ferris wheel and an IMAX theater. 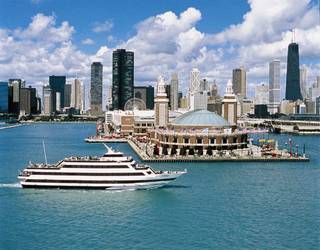