Loyola University is one of Chicago's premier universities. This private Jesuit university was founded in 1870 by the Roman Catholic Society of Jesus, initially under the name St. Ignatius College. It has since grown to become the largest Jesuit university in the country. Loyola has six campuses throughout Chicago, along with an overseas campus in Rome, and guest programs in Beijing and Ho Chin Minh City, Vietnam. 12 undergraduate, graduate, and professionals schools offer 71 undergraduate degrees, 85 master's degrees, 31 doctoral degrees, and 26 graduate-level programs. The main campus is located in Rogers Park along Lake Michigan. 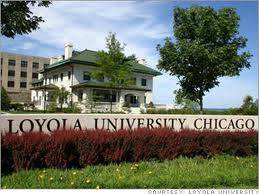