The reason why french fries are one of the most quintessential comfort food isn’t just because crispy starch is salty and delicious, but because they’re some of the most versatile foods out there. From high-end frites to over-the-top poutine or cheese fries, french fries are the ultimate. And Chicago is in the midst of a french fry renaissance, as restaurants and bars across the city continue to innovate and push the potato envelope with a surplus of saucy new french fry variations. Work up an appetite and head to these seven eateries for some of the best (and most indulgent) fries in town.

Bounce: Quirky and playful comfort food is the name of the game at River North’s brand-new Bounce Sporting Club, which features a laundry list of all-star snacks like quesadillas, chicken wings, tacos, nachos and even chicken nuggets. But it’s the humble french fry that’s the real star, thanks to the runaway menu hit: pizza disco fries. That’s right, this is a french fry that borrows inspiration from another all-time comfort food favorite, pizza. Similar in concept and preparation to cheese fries, this hulking mountain of food features a heap of fries strewn with marinara sauce, mozzarella, sausage and pepperoni.

DMK Burger Bar: Although burgers take top billing at this Lakeview-based institution, french fries are the sleeper hit, especially considering the sheer variety of options they come in. All made from hand-cut, impossibly crispy-crunchy russet potatoes, these fries are anything but average. Try the parmesan-truffle cream fries for something snazzy and pungent, or get the “angry fries” with chile powder and sriracha mayo if you like heat. Sweet potato fries are available as well, served with lemon-Tabasco aïoli, or opt for something more classic like the sea salt and black pepper fries with fruity house ketchup.

Kaiser Tiger: It’s no surprise that a restaurant as unabashedly meaty and excessive as Kaiser Tiger, where something called “bacon grenades” is an appetizer, features some of the most decadent french fries in the city. Indeed, poutine is offered as a shareable starter plate as well, with thick hand-cut fries doused in Southern-style white sausage gravy and strewn with fresh cheese curds.

Hopleaf: Sometimes, you can’t beat the classics. In the case of french fries, it doesn’t get more classic Chicago than the version served at Andersonville’s beloved Hopleaf. The frites aren’t as over-the-top and flashy as poutine or pizza fries, but they’re perfect in their simplicity. Here, salty shoe-string style frites adjoin every order of steamed mussels, heaped in a paper cone with a side of aïoli and a crock filled with hot broth for dunking. When dipped in the sauce and the broth, it’s one of the most satisfyingly perfect bites in the city.

Quartino: An Italian restaurant may not seem like the most obvious choice for a french fry fix, but you’ll be singing a different tune once you sample the polenta fries at Quartino. Among the many shareable small plates, the polenta fries are king. These thick, toothsome morsels consist of creamy, cheesy polenta that’s been smoothed out and cooled in a pan before being cut into fry-shaped wedges and fried. The result is a golden-brown fry that’s crispy and salty on the outside, while retaining a creamy interior. They’re served with a vibrant red pepper salsa for dipping.

Fatso’s Last Stand: The only way to up the ante on the delicious, salty and mildly greasy french fries at this Ukrainian Village hot dog institution is by combining the fries and hot dogs into one salacious bite. When you order a classic char dog here, the french fries often come heaped atop the mustard-y sausage, and they’re best left that way, lending added texture and seasoning to the savory meal.

The comfortable Andersonville beer lounge draws the suds enthusiast for its more than 200 selections. Also, all menu items complement the beer.

Order 20 to 30 wines by the quartino (small carafe) at this casual, lively enoteca and a plateful of Chef John Coletta's house-cured salumi, or savor pastas and thin-crust pizza. 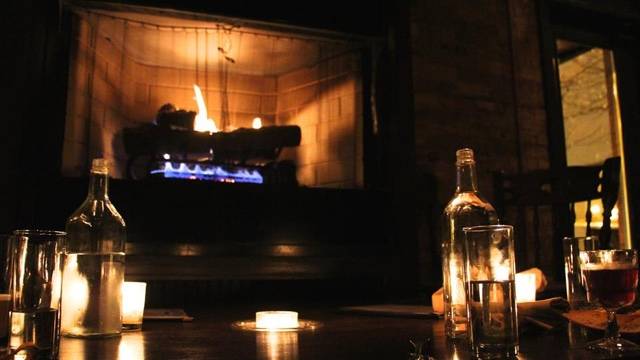