Fathers Day, Let Him Do What He 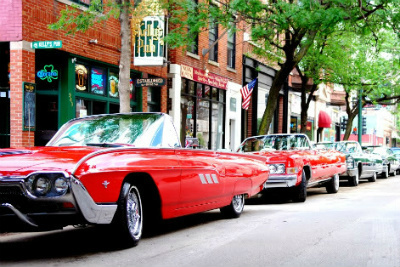 But honestly? If you left him on his own, he’d sit around all day on the sofa like Al Bundy with baseball on the tube. So, let’s rephrase that: Let Dad do what he really wants to do outside of the house.

You can start with brunch options tailor-made for him:

IPO. If you plan on spending the day in the Loop (i.e. Art Institute, Goodman Theatre, etc.), a visit to W Chicago City Center should be in order. Executive Chef Trevor Hoyte launches brunch on Father’s Day weekend, so you’ll be the first to check out what he’s dubbing “new urban cuisine.” Dig into hearty dishes such as fried chicken with a buttermilk jalapeno cheddar biscuit; a chorizo skillet of pork shoulder, potatoes, tomatoes, green onions and tomatillo sauce; and a cheddar burger complemented by a sunny side up egg. All dining dads get a complimentary whiskey sour cocktail. Brunch hours are 7:30am-1:30pm Saturday, Sunday.

Luxbar. Cross your fingers for good weather, so you and pops can sit on one of the Gold Coast’s hottest patios for a great brunch that won’t break the bank. Some items he should love include cinnamon bun pancakes, house-cured Skuna Bay salmon Benedict, Gold Coast omelet (chives, parsley, tarragon and wild mushroom truffle cheese) and the Gibsons-marinated USDA prime skirt steak with eggs. Most dishes are under $15. Brunch occurs 11am-3pm.

McGee’s Tavern. Classic car enthusiasts look forward to the annual Father’s Day brunch at this popular Lincoln Park sports bar. In its eighth year, the event attracts those boasting some of the most spectacular muscle and classic cars seen on the streets of Chicago. Brunch is on McGee’s if you join in on the fun by showing up in your classic car. Food options include the brunch buffet, Famous McGee's Eggs Benedict and Bloody Mary Bar. 10am-3pm.

Real Men Cook. In its 24th year, the outstanding charity event brings together African-American fathers from all walks of life. They’re cooking their favorite dishes, which usually consists of something on the grill. The event includes live entertainment and an all-you-can-eat opportunity, so bring a hearty appetite. 3-6pm. The event takes place at the Salvation Army Ray & Joan Kroc Corps Community Center, 1250 W. 119th St. It's $25 for adults (in advance); $10 for children. Here's how to get tickets.

Three Aces. Head to this Little Italy hot spot on the later end of brunch (11am-4pm) if you expect to ogle the motorcycles that come roaring through around 5pm every third Sunday of the month. June’s “bike night” event just happens to fall on Father’s Day, so it should be especially jam packed. Best bets for brunch include a spring frittata of Slagel Farm eggs, soft herbs, goat cheese and asparagus; the signature “Ace” burger topped with bacon jam; and a duck egg that comes with fontina fonduta, prosciutto, scallions, grilled bread and olive oil. A Rockabilly band performs at 5:30pm. 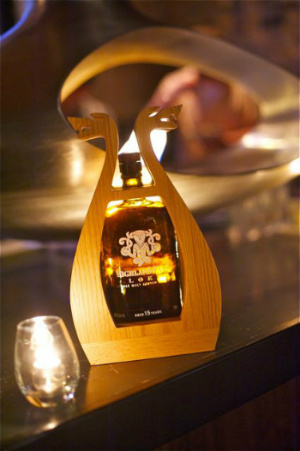 If he opts for a backyard BBQ and you know he’ll insist on cooking, hook him up with a premium bottle of scotch:

Loki. Go ahead and indulge Dad should he wish to take matters in his own hands, but let him know you’ve got his back with a new offering from Highland Park Single Malt Scotch. The limited-edition, 15-year-old Loki debuted earlier this spring with eye-catching packaging guaranteed to set it apart from its competitors. Named after the legendary, mischievous character in Norse mythology, Loki matured in sherry casks, giving it smoky overtones laced with traces of melted dark chocolate, apple and vanilla. We can totally see it going well with ribs. It’s available at Binny’s.

The Macallan 18. The traditionalist dad will certainly appreciate a decadent bottle of this single malt scotch that’s spent 18 years in sherry casks. This makes it especially ideal for sipping on the patio, with rich crème brulee and wood smoke flavors nicely combining for something extra special. Grilled burgers topped with smoky cheddar or exotic cheeses should work well with this spirit.

How about tickets to cool, culinary-focused events?

Chicago Gourmet. If pops' a serious gourmand, he'll certainly appreciate a pair of tickets (for you and him?) to one of the city's most highly anticipated annual events. He'll have the opportunity to sample cuisine from local culinary stars, sip spirits from around the world and sit in on seminars from famed chefs, sommeliers and others in the industry. Chicago Gourmet takes place in Millennium Park Sept. 28-29 and tickets are $159 each day per person or $265 for a weekend pass for each person. Tickets may be purchased right here.

CigarBQue. Boka executive chef Giuseppe Tentori (also of GT Fish & Oyster) teams up with chefs Rick Gresh (David Burke's Primehouse) and Cleetus Friedman (Fountainhead) for this second-annual charity party benefiting the Cigar Family Charitable Foundation. It takes place at 6:30pm June 21 at Beyond Design (4515 N. Ravenswood Ave.) and it's exactly what you think it is: people chowing down on chef-driven BBQ dishes and smoking cigars. Add to the mix even more celebrated chefs and you've got one hell of a bash. Craft cocktails also included in the ticket ($150 per person). The tickets may be purchased right here.

Hop Chef Chicago. Chefs from David Burke's Primehouse, Fountainhead, G.E.B., Paris Club, Publican Quality Meats and other spots compete against one another in Brewery Ommegang's first-ever event in Chicago. Chefs are challenged to create the perfect beer and food pairing, and you'll get to sample. They'll be judged by a panel of local and national food critics. The event takes place 7-10pm July 1 at Paris Club. Tickets are $60 (get them here) and a portion of the proceeds benefits Common Threads.

Treat him to an unconventional sports bar:

Headquarters Beercade. There's nothing better than bonding over a little friendly competition, so Dad most certainly should appreciate you taking him to this old school-styled arcade lounge. Every game is free, plus there's a good list of craft beers and cocktails. Go ahead and knock 'em out!

Michael Jordan’s Steak House. Deep leather booths, a great manly cocktail list, and the opportunity to order prime steaks from the restaurant’s menu makes this lobby level sports lounge one of the fanciest in the city. The only thing missing are the cigars. Too bad.

Public House. The taps-at-the-table concept worked so well at their other property, Bull & Bear, that the owners decided to upgrade it at their second sports bar. While Bull & Bear’s table taps only feature craft beers, the eight special tables at Public House are outfitted with Maker’s Mark. You control the taps.

Scout’s. The home of the foot-long grilled cheese also boasts exceptionally attractive female servers, which should certainly put a smile on Dad’s face. And no matter where he sits, he’s certain to have a great view of the big game with the amount of television monitors in the room. 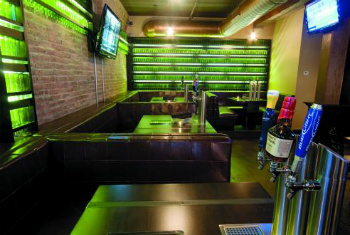 Let’s be real. All he wants is a nice, juicy steak:

Carmichael’s. From a 24-ounce Porterhouse to naturally raised New York strip, the West Loop steakhouse cranks out superior cuts of beef. Be sure to order favorites starters such as the buffalo chicken spring rolls, lobster tempura or fresh seasonal oysters.

Chicago Chop House. The city’s power brokers and well connected congregate at this venerable steakhouse located in a restored, century old Victorian brownstone. Highlights on the menu are the 64-ounce Porterhouse, 16- and 24-ounce New York strips and 24-ounce prime rib.

Chicago Cut Steakhouse. From the awesome view alongside Chicago River—where guests may also dine on the patio—to signature USDA prime cuts of filet mignon, ribeye and Porterhouse, Chicago Cut feels like a special treat. The first 75 guests who make Father’s Day reservations get a special gift bag that’s valued at more than $300. Those are reserved for dads only.

Keefer’s. The River North steakhouse feels contemporary with its sleek indoor/outdoor atmosphere and state-of-the-art flatscreens showing sports action, but the steaks are classic. Highlights include the bone-in ribeye, Porterhouse and Kansas City strip.

Rosebud Steakhouse. Dads dining at any of the Rosebud restaurants (Carmine’s, Centro, Rosebud on Rush, Rosebud Prime, etc.) on Father’s Day will have the chance to win a chef’s dinner for six people at a later date. The fabulous feast is a tasting menu prepared by corporate executive chef Joe Farina and includes a 48-ounce prime t-bone, wine pairings and a few kitchen secrets.

A popular destination before and after concerts and sporting events at United Center, Carmichael’s exists as the only authentic steakhouse in the West Loop. You may certainly order a decent...

The upscale sports lounge attracts a monied crowd looking to wind down with a large selection of beer on tap as well as chef-driven pub grub. The highlight at Bull...

Located in the heart of the Ravenswood, Lincoln Square, and North Center neighborhoods, Fountainhead offers an Old World yet innovative drinking and dining experience. The food approach is farm-to-table pub...

The chef-driven menu at this South Loop watering hole features foot-long grilled cheese and other sandwiches, salads, flatbreads and a handful of larger entrees.

Trevor Hoyte subtly incorporates his deep Caribbeans roots into the cuisine at the W's lobby level restaurant. He's calling it "New Urban Cuisine," which consists of modern twists used in...

Vintage arcade games, throwback "craft" cocktails (with names like The Billy Mitchell and Raging Bull) and an industrial setting sets this bar apart from others in the neighborhood. All 37... 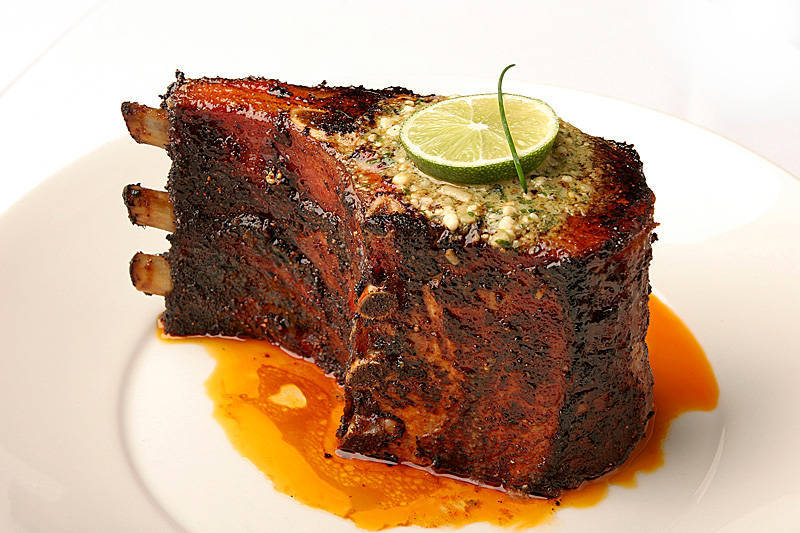 Here are ten Chicago steakhouses that are doing something a little different for Valentine’s Day, and, yes, there will be lots of red meat involved. And lobster. ... Read more 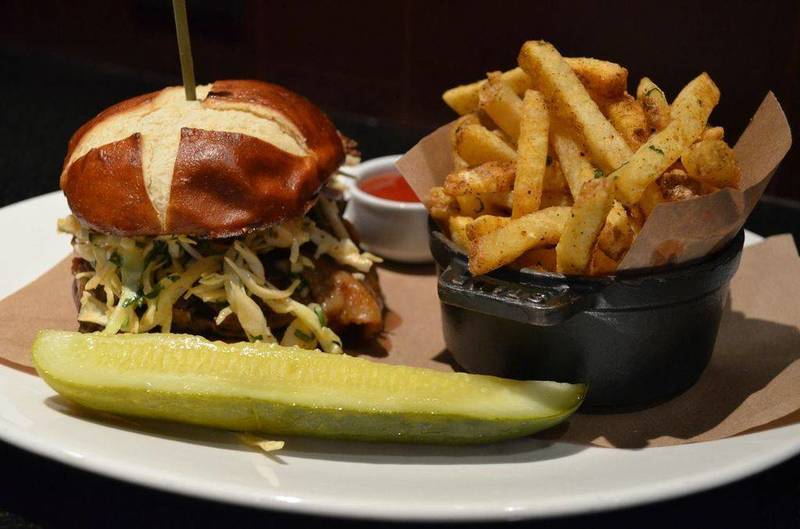 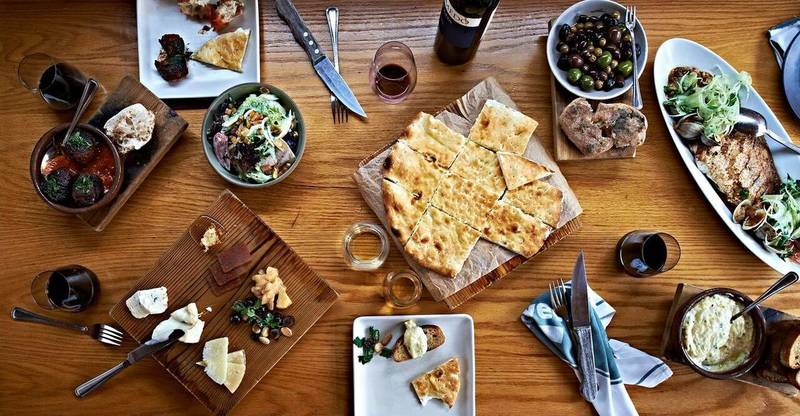